The report covers comprehensive information about market trends, volume (Tons) and value (US$ Mn) projections, market dynamics, competition landscape and recent developments regarding the global busbars market for the study period 2018 to 2028.

The global busbars market is expected to reach over US$ 23,177.7 Mn by the end of the forecast period, registering a CAGR of 4.0%. According to the analysis, the demand for busbars is expected to keep increasing and gain significant traction in the coming years. Increasing installations of busbars in commercial spaces such as hotels, research centers and hospitals and residential buildings are expected to reinforce the positive outlook of the global busbars market.

The two major types of busbars covered in thd e research study are copper and aluminum busbars. Copper busbars are the most commonly used busbars for residential, commercial and industrial purposes.

Busbars are extensively used in high current, low -medium voltage distribution and control equipment. They are used for heavy electrical uses in various industries and commercial buildings as feeder systems and plating cells. Furthermore, switchboards, panel boards, bus-way systems and low & medium voltage switchgear, among others are some of the major conductor types where busbars are used.

Simple installation and ease of maintenance of busbars

The busbar system consists a circuit breaker and an isolator. The faulty section of the busbar can be easily disconnected from the circuit on the occurrence of a fault where the circuit breaker is tripped off. Furthermore, the selection of busbars is majorly dependent on various factors such as cost, flexibility and reliability.

Different busbar systems such as single bus-bar arrangement, main and transfer bus arrangement and double bus double breaker arrangement, among others are easy to install as per specific requirements and are thus, being offered by several players in the market.

Regional outlook of the busbars market

North America is expected to dominate the global busbars market in terms of new sales per annum of copper and aluminum busbars for industrial, commercial, and residential sectors. MEA and South East Asia are expected to gain traction over the forecast period, owing to the anticipated increase in adoption and installation in these regions. All other regions are expected to exhibit moderate growth in the same period. 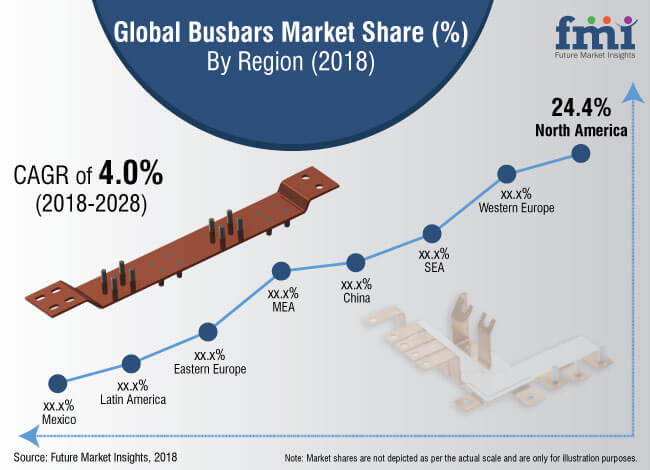 In the recent past, the busbars market has witnessed significant developments from a competition perspective. Product innovations, mergers and acquisitions are some of the preferred strategies opted by key players to sustain and enter in the global busbars market.