An Incisive, In-depth Analysis on the Ginseng Market

This study offers a comprehensive, 360 degree analysis on the Ginseng market, bringing to fore insights that can help stakeholders identify the opportunities as well as challenges. It tracks the global Ginseng market across key regions, and offers in-depth commentary and accurate quantitative insights. The study also includes incisive competitive landscape analysis, and provides key recommendations to market players on winning imperatives and successful strategies.

Ginseng, a root that has been used in traditional Chinese medicine for a long period of time,is available in the form of powder and extract. It provides many health benefits, and is therefore used in pharmaceutical and healthcare products. It is also incorporated in various food and beverage products. The ginseng market is segmented on the basis of region, source, form, end use, and variety. The demand for ginseng is expected to increase in industrial sectors such as food, beverages, personal care, and healthcare, due to the increase in health awareness among consumers, rise in demand for organic products, and consumer preference for clean-label products.

Ginseng is predominantly produced in Canada, South Korea, and the U.S. Some of the top exporters of ginseng are Canada, South Korea, China, Hong Kong, and the United States. China is one of the leading ginseng consumers, and has been using it as a herbal medicine for centuries. South Korea is also among the important consumers and has been using it in various food preparations, beverages, and personal care products. Canada is one of the top ginseng producers, and exports a major part of its cultivation to China. The demand for ginseng is expected to grow at a higher rate in regions such as Asia Pacific excluding China and North America.

Ginseng has anti-inflammatory and antioxidant properties that help boost the immune system, and therefore reduce the risk of infections from microbes and viruses. It may also help in reducing the risk of some types of cancers. The other health benefits provided by ginseng are improvement in brain functions such as behavior and memory, reducing blood sugar, improving erectile dysfunction, etc. Therefore, it has been used as an herbal medicine and has many applications in the pharmaceutical industry. It has also been used as a supplement for animals, and is commonly recommended for dogs and cats, since it improves their immunity, as such reducing the threat from certain diseases. 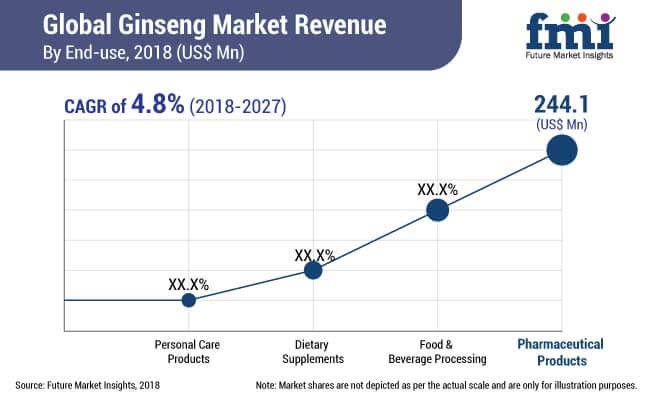 Limited Availability of Wild Ginseng Proving to be a Major Challenge

A major restraint for the ginseng market is the limited availability of wild ginseng. Wild ginseng is not cultivated but grows naturally, and is harvested from regions where it is found growing. The over-exploitation of wild ginseng has led to its decrease, and as such, has increased the occurrence of illegal harvesting so as to fulfill the demand for ginseng in major regions such as China, Korea, etc. In order to curb illegal harvesting and trade of ginseng, government regulations and restrictions are in place. For e.g., the cultivation of American ginseng is allowed only in certain states in the U.S., and is illegal to cultivate without permission. Therefore the prices of wild ginseng are increasing at a very high rate, and thus, might dampen the demand for wild ginseng in key countries globally.

The food and beverage processing industry is growing at an exponential rate, and has been focusing on developing products that contain organic and nutritive ingredients. The trend for clean-label products might serve as one of the drivers for the ginseng market. Consumers prefer products that have unique flavours and contain nutritive ingredients that provide health benefits, and therefore, manufacturers are incorporating ginseng into various food products such as candies, cakes, chocolates, etc.

FMI has compiled a study on ginseng, which offers an analysis and forecast of the ginseng market, in its publication titled, Ginseng Market: Global Industry Analysis 2013–2017 and Opportunity Assessment 2018–2027. This report on the ginseng market covers some of the vital facets that are key influencing factors on the demand and supply of ginseng over the next several years. An in-depth review of the growth drivers, potential challenges, unique trends, and opportunities for market participants equip readers to fully comprehend the overall landscape of the ginseng market. The report on the ginseng market also covers analysis of key regions and countries of particular interest that are anticipated to become frontrunners or remain laggards over the forecast period. The report covers a historical analysis of the market from 2013 to 2017, and provides forecasts from 2018 to 2027 in terms of volume in metric tons and revenue in US$.

Ginseng is an oval-shaped adaptogenic root that has medicinal properties. It is considered as an adaptogen because it regulates the metabolic stress present within the body. Due to the limited availability of wild ginseng, it is one of the most expensive herbs. Ginseng tea is a herbal tea that is predominantly used in Korean traditions, and is prepared using ginseng. It is also incorporated in various Asian recipes, and is extensively used in China and Korea. It has an earthy sweetness that can perfectly blend with rosemary, cinnamon, ginger, clove, chillies, and other spices, and therefore, is also used in the preparation of a variety of soups. Fresh ginseng is less bitter when compared to the dried variety. It can be also used as a tonic to improve the functioning of the kidneys, spleen, etc., and thus restore the energy in the body. There are different varieties of ginseng such as the American ginseng, Oriental ginseng, Siberian ginseng, etc., which differ in taxonomy.

Ginseng cultivation requires specific growth conditions, such as around 70% to 90% shade, specific temperature, soil pH, etc., and therefore, is cultivated only in certain regions around the world. Unpredictable changes in climate due to global warming can have a negative impact on the production of ginseng, and as such affect its market. But by using modern technology, ginseng can be cultivated under artificial shade. Also, the simulation of other specific conditions such as pH, temperature, moisture, etc., can help increase its production. The use of artificial shade and simulation of growth conditions have been practiced all around the world, and can enable an increase in its production. This is likely to have a positive impact on the ginseng market.

This report on the ginseng market has been broken down into different chapters to enhance clarity and provide context. A brief executive summary at the beginning of the report consists of some of the key findings of the study on the ginseng market, as well as market estimates and growth rates for important segments. The following chapter presents the definitions and scope of the study, as well as the coverage in terms of the way the market is structured. Subsequently, the chapter on market background presents the evolution of ginseng, relevant economic indicators such as GDP and per capita consumption, including an assessment of the supply chain, policy developments and regulatory scenario, and dynamics impacting the ginseng market, as well as an explanation of the factors considered important to develop forecasts and estimates. The report on the ginseng market also includes a chapter on pricing analysis, highlighting price point variations between different regions and products, including pricing forecasts. The following chapters dive deep into the global market, covering detailed information based on region, source, end use, form and variety. The next set of chapters provide region-wise analysis and forecasts of the market, covering vital aspects of the market in North America, Latin America, Europe, China, Asia Pacific excluding China, and the Middle East and Africa.

To develop the market estimates for ginseng, the overall production of ginseng in different regions and countries has been taken into account, which is followed by tracking the trade of ginseng and imports by major consuming countries. This is then cross-referenced by understanding the recent production and consumption trends in specific regions. The prices of ginseng have been obtained from manufacturers, distributors, and wholesalers for bulk quantities at a country-level.

Our team of analysts review and interpret data from a variety of sources. Data attributed to ‘FMI’ is derived by using a combination of various approaches, which are then consolidated, interpreted, and extrapolated by FMI analysts. Data is sourced from government statistics, trade associations, company annual reports and investor presentations, press articles and directories, technical publications, and online databases, which are then cross-referenced with FMI’s reports and internal repository of data to filter and validate the collected information. Intelligence gathered from desk research is supplemented by extensive interviews with selected key expert participants across the value chain, not only to gain information specific to their roles and operations but also to obtain their perspective and insights of the issues impacting the ginseng market.