NMP is used in water borne paints as a coalescing solvent and also in solvent-borne coatings. It finds significant usage in wire coatings made from PAI and PI. It is also used in the production of magnetic wire coatings. Among all the major application areas, electronics is expected to dominate the global market, with its market value expected to reach over US$ 250 Mn by the end of 2028, growing at a CAGR of 5.2% during the forecast period. Industrial cleaners may also turn out to be another lucrative application area of NMP with a high market value estimated during the forecast period. 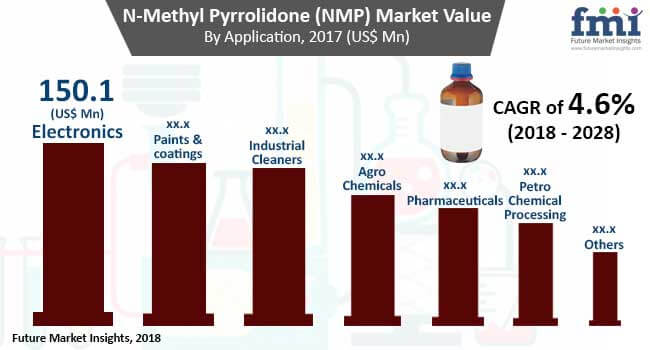 Demand for NMP is anticipated to increase in some end use applications such as electronics during the forecast period. There is no direct exposure to NMP in the electronics industry as most processes are conducted in isolated clean rooms. Over the last few years, the electronic goods market in Europe has been growing steadily with a higher growth rate than the global industry production. The Li-ion battery market is also anticipated to expand at a strong rate during the forecast period, which in turn will trigger the growth of the NMP market worldwide.

However, within Europe, Germany is the largest producer of electronic goods. The production growth rate of the electronics industry in Germany has been above the European average. Approximately 40% of the electronic products manufactured in Germany are exported. The German electronics industry is recognised as one of the strongest and is also the most research and development intensive, thereby making it the most lucrative regional market for NMP.

The price of NMP ranges from US$ 2000 per ton to over US$ 2800 per ton. This is a result of low production volume and extreme care is required during the manufacturing process involving the use of NMP. This makes the production cost higher than that of regular grades. The use of NMP is limited to certain high cost, speciality and niche applications that necessitate significantly higher levels of purity and performance characteristics.

For the same reason, the overall NMP market is significantly smaller as compared to other industrial solvents. Companies are now looking for substitutes of NMP due to its high cost, delicate nature, and also due to concerns pertaining to health safety. Mature markets in the Asia Pacific region are anticipated to show moderate growth of green products. The trend in Asia Pacific is to produce products that are environment-friendly and cause no harm to human health. These factors may lead to a decline in the growth of the global NMP market in the coming years.