Guarana Market: Thermogenic Property of Guarana Expected to Increase the Application of Guarana as a Dietary Supplement: Global Industry Analysis and Opportunity Assessment, 2016-2026

Will the global Guarana market show sustained growth in future?

Guarana can be defined as a substance that is produced from the seeds of a woody perennial shrub found mainly in Brazil. It is primarily used as a stimulant due to its high content of caffeine. It is also used to treat various diseases such as low blood pressure, diarrhoea, cardiac problems, headache, fever, and joint pain among others.

Furthermore, Guarana is also used as a flavouring ingredient in beverages and confectioneries. Guarana is used across a variety of applications such as confectionery products, fruit juice based drinks, energy drinks, dietary supplements and others which include weight loss products.

In terms of value, the global Guarana market is expected to register a CAGR of 7.1% during the forecast period (2016–2026). The global Guarana market is expected to be valued at US$ 7.4 Bn by 2026 end. On the basis of product form, the liquid segment is projected to account the largest value during the forecast period followed by the powder segment which accounts for around 40% value share.

In Brazil, expansion of the organised retail has led to the widespread supply of Guarana, through an extensive distribution network. These factors are expected to bolster the growth of Guarana market in the near future.

The growth of the Guarana market is also expected to increase significantly due to rising demand for natural and herbal cosmetic products such as Guarana in sensitizers, conditioners, shampoo etc. among global consumers. Various government agencies and institutions are promoting dietary supplements in order to control and prevent diseases such as obesity, blood pressure and high cholesterol is expected to drive demand for Guarana.

Liquid product form in the global Guarana market is estimated to account for 60.4% value share by the end of 2016 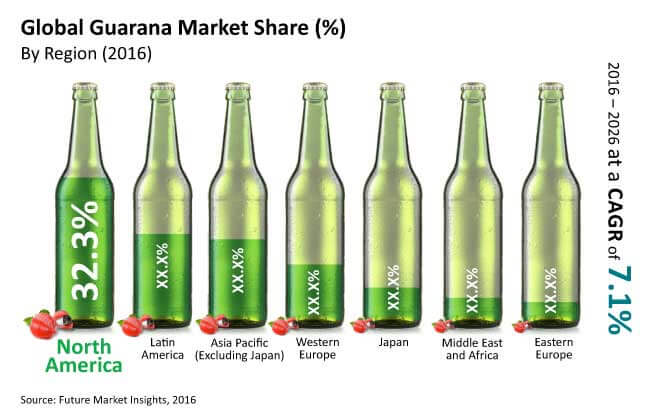 Based on region, North America is expected to witness the highest share in the global Guarana market owing to increase in per capita consumption coupled with growing awareness relating to the benefits of Guarana. Growing health and wellness trends coupled with the increase in consumption of energy drinks is expected to support revenue growth of the North America regional market over the forecast period. The Latin America Guarana market is expected to grow with the highest CAGR over the forecast period due to growing production of Guarana in Brazil.

To understand and assess opportunities in the global Guarana market, we have divided the report into three sections bases on market segmentation as under: