The percentage of population above 65 years of age has significantly increased over the past decade, particularly in Europe and North America. Consequently, the risk of tooth decay, osteoarthritis and other hip, knee and joint problems have increased.

This will have a direct impact on the global bio-ceramics and hydroxyapatite market demand. Also, as per the Medical Implants Association data, there has been a major increase in the number of per 10,000 capita orthopedic implants worldwide in 2017-18.

This heightened demand from dental and orthopedic implants will thus propel hydroxyapatite consumption over the forecast period.

In terms of structural stability, hydroxyapatite has been found to be more stable when compared to other calcium phosphates. Thermodynamically, it has been proven to be the most stable calcium phosphate compound under such physiological conditions as temperature, pH and composition of the body fluids.

It has, therefore, been a preferred material for dental implants and prosthetic material by healthcare professionals. It has been found that the crystallography and chemical composition of hydroxyapatite has been found to be the closest match with actual human hard tissue.

Moreover, research on teeth enamel has proven that they are largely composed of a form of this mineral.

Significant research and investment is being done on the use of hydroxyapatite for 3-D printing applications to create artificial bones. . Hydroxyapatite is a major constituent of bones. 3-D printing would enable and re-design 3-D printable prosthetics.

There has been rise in demand for manufacturing implants with better Osseointegration performance. To comply with the desired properties, the hydroxyapatite producers have been continuously engaged in development of superior product grades to ensure greater durability.

The hydroxyapatite market demand and healthy margins generated from the sales of hydroxyapatite have enabled them to invest a substantial amount of capital for product R&D on a consistent level. 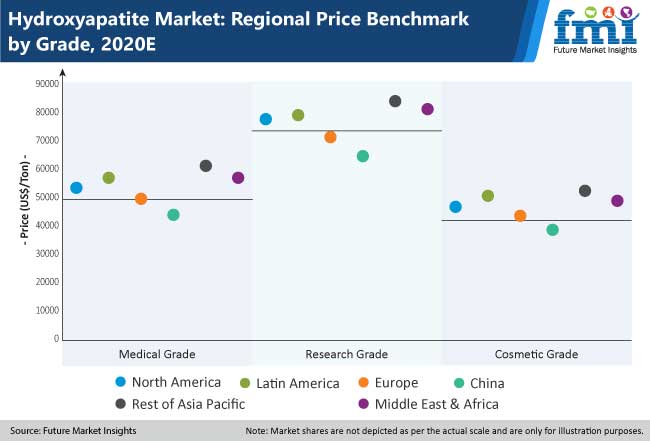 Titanium and other metal based implants currently dominate the hydroxyapatite markets in developing countries due to limited awareness and relatively cheaper price as compared to bio-ceramics and hydroxyapatite.

With lower capita spending across developing countries in Latin America, Asia Pacific and Africa, availability of substitute materials at low prices compared to hydroxyapatite may compel end users to resort to substitutes resulting in slowdown of hydroxyapatite sales in these countries.

China and South East Asia are estimated to hold a prominent market share in terms of consumption of Hydroxyapatite.

Demand from North America and Europe is largely attributable to treatment of geriatric population, prosthetic implants for professional purposes, whereas, the demand from Asia Pacific and other countries are due to surging accident and trauma related cases and commercial development of the product.

It can also be reasoned that developed countries have been the early adopters whereas the developing countries are in the introductory stage of product adoption.

Bonesupport AB and Berkeley Advanced Biomaterials have been pioneers in the global hydroxyapatite market with a significant share, focusing on innovation and diversification of product portfolio in order to establish a business footprint across prominent geographical regions.