The mannitol market is forecast to exhibit steady growth, with its overall valuation reaching US$ 390.9 Mn in 2021. As per FMI, mannitol sales are expected to surge at 6.8% CAGR over the course of the assessment period. Overall growth forecast for the market will remain positive through 2031.

Volume sales of mannitol is expected to rise at 5.6% in 2021 with shipments reaching 66,898 MT in the same year. With low-calorie sweeteners projected to become highly sought-after, overall growth trajectory of the market will remain positive between 2021 and 2031.

Over the past few years, the market for mannitol gaining from the rising demand as a food additive. Between 2016 and 20 the market recorded a CAGR of 5.5%. Growth forecasts remain positive as the market is expected to showcase a CAGR of 6.8% between 2021 and 2031.

The rising incidence of diabetes is underpinning growth in the mannitol market. Its application is likely to surge in the food and beverages sector as a sweetener because it does not cause a significant increase in blood glucose levels.

As it is a low-calorie and non-cariogenic addition, the global mannitol market is also benefiting from increased consumer health consciousness. Increasing applications in confectionery are propelling growth. Because of its cooling effect, it is increasingly employed in mint-based sweets and gums.

In the food industry, mannitol is widely used as a coating in dried fruits, hard candies, and chewing gums due to its low hygroscopicity, which results in reduced water absorption from the air. It is also being used more frequently in chewable pills due to its appealing flavor and mouthfeel.

As compared to carbohydrates, which are commonly used in low-calorie foods, mannitol has lower caloric values. Mannitol is also metabolized independently of insulin, making it suitable for diabetic food items. Mannitol has a caloric value of 1.6 kcal/g.

Because of increasing awareness about the health benefits of low calorie sugar consumption will fuel the demand for mannitol in the coming years.

How is Increasing Mannitol Application in Food Products Augmenting Growth?

Mannitol is increasingly used as a key ingredient in the food industry. Due to its moisturizer function it is used in several food products. Mannitol’s non-hygroscopic properties make it highly suitable for application in the food product.

Its moisture control properties are highly indispensable in the food sector, since it allows to keep increase the shelf-life of food products. It is used as dust powder in chewing gum to prevent gum from sticking wrappers.

Mannitol is also used as coating agent in different food products. Due to its high melting point and it does not discolor at high temperatures. The increasing use of mannitol in ice cream, frozen desserts, and other sweets will create opportunities for the market growth.

Why is the Demand for Mannitol Increasing in Beverage Industry?

The demand for canned beverages, juices, coffee, and other flavored drinks is all on a rise around the world. The majority of beverage items are dependent on sugar. Sugar is used by manufacturers to improve the taste and mouthfeel of flavored drinks.

Regular sugar contains higher calories in beverages. Due to increasing cases of various chronic conditions such as diabetes and obesity among others, an increasing number of consumers are trying to control calorie, carbohydrate, or specific sugar intake.

Therefore the beverage manufacturers shifting towards sugar alcohols to keep pace with the changing trend. This is increasing the demand in the beverage industry.

Which Factors can Restraint the Growth of Mannitol Market?

Mannitol is increasingly used in pharmaceutical applications. It also is used in the treatment administered for kidney-related problems, to reduce swelling in the brain, and other conditions.

Despite its various health benefits, mannitol use has certain drawbacks. It is associated with different side effects, such as chest pain, congestive heart failure, low blood pressure, headache, urinary retention and many others.

Also, artificial sweeteners are similar enough to sugar molecules to interact with the sweetness receptor. They are normally too different from sugar to be broken down by the body into calories. This is how they achieve a sweet flavor without adding extra calories. Artificial sweeteners come in a variety of flavors, but not all of them are licensed for use in every country.

Along with that, other sugar alcohol products such as Sorbitol, Arbitol, Xylitol, Erythritol and many others are the most commonly used for making food and pharmaceutical products. The availability of such Mannitol substitutes could stifle market growth in the coming years.

What Is the Impact Of COVID-19 Crisis On Mannitol Market?

Despite of being re-emergence of the pandemic, there has been easing of the lockdown in few countries as the countries are slowly recovering from the pandemic and the fatalities. Although the sale have been affected, considering all the other factors that could affect the market, the likely scenario of the mannitol market is to grow at a CAGR of 6.8%.

Sales of Mannitol may increase as a result of rising health-conscious consumers and wellness being at the top of the list after being severely impacted by the pandemic. However, in the worst-affected countries, the economic condition would remain a critical element, preventing the mannitol market from growing.

How big is the Opportunity for Mannitol Market in the U.S.?

According to FMI, North America will continue to be one of the most attractive markets during the forecast period. According to the study, the U.S. is anticipated to account for over 62.4% of the North America market through 2031.

Consumers are becoming more conscious of their dietary needs as they have access to near-infinite information. As a result, people have become gradually aware of making healthier food and beverage choices. As people's awareness about health is rising, there's a greater demand for low-calorie food and beverage products to assist them to stick to a balanced diet.

Also, in the US, Sugar replacements in final goods are preferred by most health-conscious consumers since they contain fewer calories than conventional sugar. Thus, the growth of mannitol market in the US is attributed to the rising demand for sugar alternatives from consumers.

How Is Demand for Functional Food Affecting Mannitol Sales in the U.K.?

The rising demand for functional foods in the U.K. will act as a chief growth driver. According to the report, the U.K. mannitol market is expected to be valued at US$ 11.9 Mn in the year 2021.

Among the other European countries, UK was the hardest hit by Covid-19. Thus, the rising health concerns among the people have led to the mounting demand for more healthy and immune-boosting products across the country. Thus, the consumption of functional foods in the UK was on regularity, but consumer concern to look after their health during the Covid-19 outbreak has certainly accelerated the demand for it.

As mannitol is increasingly used in functional food as low-calorie sugar. Therefore the demand for mannitol in functional and convenient food elevates the U.K. market growth.

What is the Growth Prospect for Mannitol Market in Brazil?

Brazil is among the fastest Latin American countries. By 2031, it is expected to account for over 34.0% of mannitol consumption within Latin America.

Brazil's high rates of obesity and type 2 diabetes have prompted the government to take steps to limit sugar consumption, and mannitol is one of the most popular sugar substitutes. According to the International Diabetes Federation, nearly 14.3 million adults were living with diabetes in Brazil in 2015.

With the incidence of diabetes forecast to rise in the coming years, focus on health and wellness will consistently rise. This will present attractive opportunities for the expansion of the mannitol market.

Food processing companies are introducing natural food ingredients into their products as a result of the increased demand for natural and organic food items. Mannitol is widely utilized in the food industry in Brazil which will help in the growth of the overall market.

How big is the Opportunity for Mannitol Market in China?

According to FMI analysis, China is expected to account for over 51.9% of the East Asia Market in the year 2021.

China is the most prominent consumer of bulk mannitol in the Asia-Pacific area. Furthermore, the country is the world's leading producer of sugar alternatives, accounting for more than 25% of global production.

In addition, the country's growing food and beverage business is driving up demand for sweeteners. Thus, the demand for mannitol is likely to increase significantly over the forecast period.

Why is Demand for Mannitol Rising in India?

India is dominating the South Asia market with a market share of more than 46%. India is the world's second-largest producer of sugar and its largest consumer. Due to the excessive consumption of sugar-based products, the prevalence of diabetes, obesity, and heart disorders is on the rise. As a result, demand for alternative sweeteners like mannitol is increasing.

Because of the new regulatory environment and permission to use sweeteners in bakery, confectionery, and dairy products, mannitol is in high demand.

As people become more conscious of the risks connected with diabetes, they have adopted mannitol. According to a survey conducted by International Diabetes Federation (IDF), in the next five years, India's diabetes population is predicted to grow to 100 million people, fueling consumer preference for mannitol.

Owing to its properties, mannitol is found in both powder and crystalline form. Among them, crystal is the most preferred form and holds a dominant share of more than 60% as expected to grow at a CAGR of 7.2% over the forecast period. 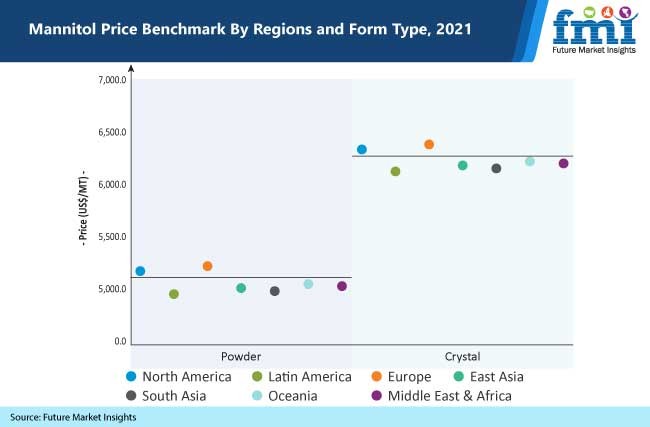 Who is the Leading End User of Mannitol?

The pharmaceuticals sector is the fastest-growing segment in terms of end-use. Over the course of the forecast period, the segment is expected to rise at 7.8% and is expected to hold a market value share of 23.5% in the year 2031.

Mannitol is a type of polyols, which helps to prevent the development of dental caries. Mannitol is immune to oral bacteria's metabolism, which breaks down sugars and starches to release acids that can cause cavities and enamel degradation.

Therefore mannitol is increasingly used in oral medicine like orally-disintegrating tablets (ODTs) and chewable and many others. Hence the demand for oral care products will elevate mannitol application in the pharmaceutical sector.

Manufacturers in developing regions such as the Asia Pacific and the Middle East have increased their research ability for new product launches. This has in turn created opportunities for the global low-intensity sweetener market.

Their focus has shifted to developing low-calorie food items as a result of the increasing number of customers suffering from diabetes and obesity.

With the increasing demand for mannitol key players across the world is focusing on the expansion of the footprint. To expand their global reach they are focusing on collaborating with regional players.

This strategy is not restricted to developing regions. Instead, some of the leading manufacturers in developed markets are eyeing collaboration as a key strategy to gain a competitive edge.

For instance: In 2017, US-based player Spectrum Chemicals & Laboratory Products signed a contract with Cole-Parmer to take care of distribution activities across North America.