A rise in the number of patients suffering from terminally-ill diseases, such as cancer and HIV, and a high surge in post-operative pain medication prescription is expected to boost the consumption of oxycodone as a analgesics.

According to the Center for Disease Control and Prevention, in 2013, there were 239 million surgeries conducted across the globe, out of which 69 million were conducted in the U.S. Out of all these 239 million surgeries, around 65% of the patients experienced moderate to severe post-operative pain. This factor fuels the adoption of opioid pain management drugs and indirectly expands the growth of the oxycodone market.

New drug development is a large market opportunity for the oxycodone market. New products with innovations in formulations and drug designing such as, abuse–deterrent formulations done in Oxycontin and Opana, fuel the branded opiate market. Moreover, the U.S. Food and Drug Administration is also encouraging drug makers to come up with a new generation drug that is less addictive. 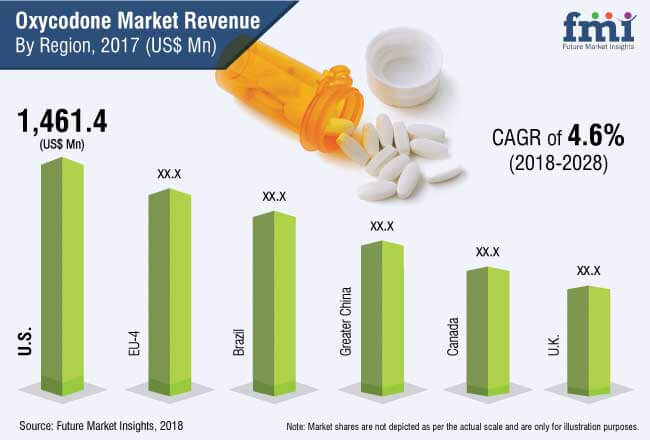 The growing healthcare infrastructure as well as healthcare expenditure of Europe, which accounts to an average 10% of its GDP, is driving the growth of the European oxycodone market. Other European nations with a sizeable oxycodone market are France, the U.K., Italy, and Spain.

Oxycodone adoption is limited due to its poor efficacy, abuse potential and side effects such as opioids induced constipation, nausea, itching, and sweating. However, an increase in non-medical prescription opioid use is driving the larger market growth.

In 2014, a total of 10.3 million persons reported using prescription opioids non medically as per the National Institute of Drug Abuse. Non-medical use of prescription opioids more than doubled among adults in the United States from 2001-2002 to 2012-2013. This has directly shown an increase in net sales

Oxycodone is an opioid available in oral liquid formulations or as oral solid dosage forms and is used to offer enhanced pain management. The major types of oxycodone based on their mechanism of action are long-acting oxycodone and short-acting oxycodone. These have evolved back in 1990, but they became significant and the market for oxycodone boomed over past ten years. Effective sales of oxycodone for major applications such as pain management and de-addiction began in 2000. Thus, in our scope of study we have looked into the historical market value from year 2013 and forecasted the market till 2028 based on certain forecast factors mentioned further in the report.

The oxycodone market has been estimated based on the supply-demand approach. The market was first calculated based on incidence and diagnosis rate, conducted in different region/countries. Other qualitative factors analyzed during the estimation include treatment rates for oxycodone, recurrence rate and others.

The oxycodone market has been analyzed across regions of North America, Latin America, Europe, Asia Pacific, and MEA.