Phosphatidylserine is high in neutral oil and fatty acids, and produced in low purity that has an off-flavour to it. These products have limited application in the functional food segment and other industries. And, in order to utilise phosphatidylserine, high-grade purity product is required. Purification processes such as ultrafiltration, supercritical CO2 extraction, and solvent extraction are utilised to reach such high purity levels for use in dietary supplements, nutraceuticals, etc.

A highly complex production process and limited use are some of the main challenges to the growth of the phosphatidylserine market. However, eating healthy due to increasing consciousness about health is becoming a popular trend in Western countries such as the U.S., Canada, U.K., Germany, etc. Dietary supplements are being consumed to stay fit and healthy. Phosphatidylserine supplements offer various health benefits.

The market for phosphatidylserine for dietary supplement products is driven by the high consumption of supplements in Western countries such as the U.S., European countries, and also the increasing consumption in emerging economies such as China and India. 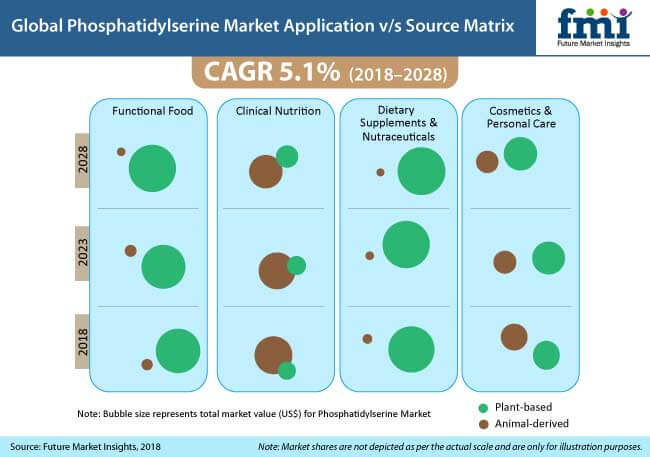 Also, in 2003, the FDA approved the health claim for phosphatidylserine regarding the improvement of memory and cognitive dysfunction. This approval has led researchers to introduce phosphatidylserine into medical foods, especially for memory-related conditions such as Alzheimer’s disease and dementia.

The use of phosphatidylserine in the cosmetic industry is negligible at present, but is expected to increase due to increased expenditure in the research and development sector. The approval and grant by the U.S. Food and Drug Administration is acting as a catalyst that is driving the global phosphatidylserine market.

These days, many consumers care about the ingredients in products, and their origin for that matter. Consumers of dietary supplements, functional foods, nutraceuticals, and cosmetic products are opting for products that strictly contain plant-derived ingredients. This preference for plant-based products is due to increasing concerns towards health issues, as well as increasing awareness about animal rights and animal welfare.