APEJ has been leading the global consumption of aquafeed for the last 10-20 years with an average per capita production of nearly 53% of the entire global production in million metric tonnes over the period.

An abundant supply of fresh water sources in APEJ along with a rich aquaculture has helped the region retain the top position in the global aquafeed market. The MEA region will hold great potential for aquaculture as most of the big feed manufacturing firms are establishing their aquafeed plants in Egypt owing to the availability of cheap labour. Besides, being the largest tilapia producing region makes Egypt the most promising region for aquafeed production over the assessment period.

Within the APEJ market, China will exhibit significant growth owing to the large water mass surrounding the Asian countries coupled with favourable climatic conditions and a positive trade scenario in countries such as India, Singapore, and Malaysia. The APEJ aquafeed market is predicted to grow 2x over the forecast period of 2017-2027. 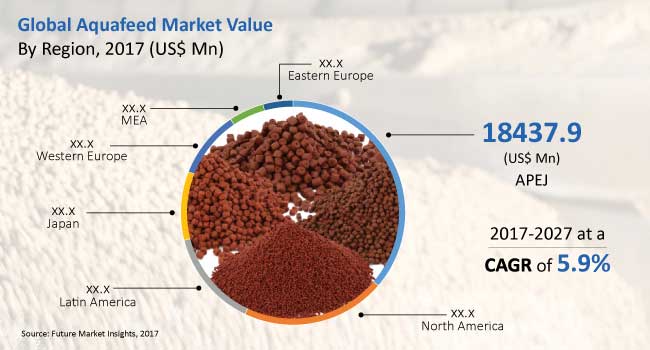 Increasing global population: A rapid increase in the global population and a subsequent rise in the consumption of food demands modern and advanced technologies as well as sonar equipment, leading to an over-exploitation of marine species and marine resources to meet the expanding consumer demands.

Rural population relying on fisheries: In several regions of the world, the rural populace survives on fisheries and aquaculture as fish is a cheaper and economical source of fats, protein, and other micro-nutrients required for proper growth and nourishment.

The global aquafeed market was valued at about US$ 48 Bn in 2016 and this is estimated to increase at a CAGR of 5.9% during the 10 year period to reach a market valuation of nearly US$ 86 Bn by the end of 2027. Besides the factors listed above, other market growth drivers include increasing incidence of food borne illness, rising concern for food safety and quality, drifting inclination towards aquaculture growth and increasing demand for sea food across the globe.

For ease of reader convenience, we have segmented the global aquafeed market into the following categories.