Asparagus is actively sought by major companies as a key ingredient in soups on account of its nutritive properties and palatable taste. Asparagus is widely predicted to become the primary choice in the soup manufacturing industry as many companies already make soup with asparagus and this is only expected to grow in the future.

Rising demand for organic asparagus in the global asparagus market

Organic asparagus is particularly consumed in North America and Europe, and import there has grown by leaps and bounds. In the U.S state of Kentucky for example, growing organic asparagus has become something of a recent trend. The produce is exported to those countries where demand is high and Kentucky has the maximum asparagus produced organically when compared to any other region in the world.

The shelf life of fresh asparagus can be extended by pickling the asparagus, adding preservatives or even keeping it in brine. It is very easy to store asparagus products in any of these forms and they can even be enjoyed for the entire year. In the global asparagus market, pickled and brine asparagus is widely available in glass jars, cans or bottles. 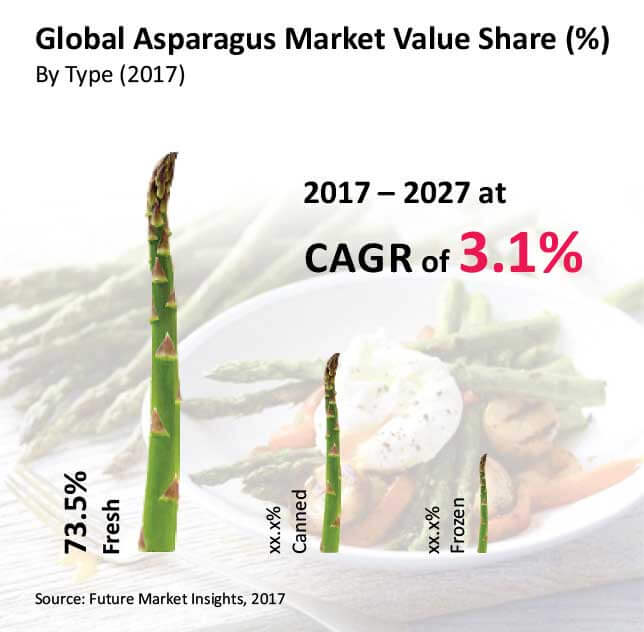 The growing popularity of fresh asparagus is evident from the increasing demand by consumers globally and as a result, the fresh segment is estimated to account for a Y-o-Y growth of 2% in value terms in the year 2017, which is expected to rise to 3.1% by the end of the forecast period.

The fresh segment is estimated to record a market revenue of more than US$ 20 Bn in the year 2017 and this is likely to reach a market valuation almost close to US$ 30 Bn by 2027, registering a good CAGR of 3.3% in terms of value during the forecast period – the highest among all the type segments of the global asparagus market.

This gain in terms of value of the fresh asparagus segment will largely be at the expense of both canned and frozen asparagus segments in the global asparagus market. The fresh segment created absolute dollar opportunity of over US$ 550 Mn in 2016 over 2015; while an incremental opportunity of approximately US$ 8 Bn can be safely assumed between 2017 and 2027.