Extensive use of bromine in flame retardants, water treatment, flow batteries and oil and gas drilling application is propelling the growth of bromine market. Moreover, rising demand for bromine in automotive and electronic industries is fostering the sales of bromine.

Increasing incidence of fire accidents has created demand for materials with fire-retarding properties. As bromine compounds possess fire resistant properties, they are being used extensively in flame retardants. 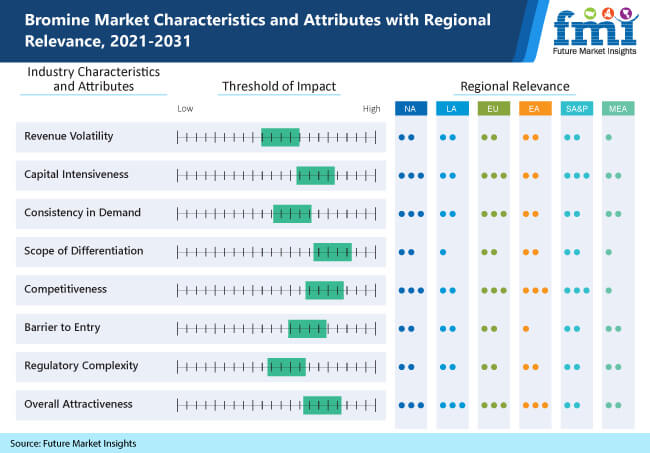 Brominated flame retardants (BFRs) are being added to furniture foam, plastic castings for electronic and textiles to make them less flammable. This has resulted in significant surge in sales.

Bromine is also used to reduce mercury emission from industries and coal-based power plants. Bromide additives convert elemental mercury into its oxidized form, which can be captured more easily by emission control equipment. Similarly, utilization of hydrogen bromide in flow batteries is positively influencing the demand outlook for bromine market.

Increasing oil and gas related activities are providing lucrative growth opportunities for bromine manufacturers. Clear brine fluids (CBFs) are gaining traction as a result of heavy consumption of these fluids in drilling activities for oil and gas.

With growing demand for bromine, key players are setting up new manufacturing plants. They are adopting various organic and inorganic growth strategies such as research (R&D) activities, mergers and acquisitions, advanced product development, partnerships and collaborations to gain a competitive edge in the market.

For instance, TrustCapital LLC announced plans to set up a production facility in Krasnokamsk, Russia in March 2020. The production facility is estimated to manufacture 1,700 tons of sodium bromide every year. Similarly, in 2019 Israel Chemicals Ltd. announced its plan to increase its bromine compounds capacity to approximately 25,000 metric tonnes annually.

The foremost applications of bromine are for the manufacturing of brominated flame retardants. High availability of bromine is seen in seawater, for example the Dead Sea in the Middle East, accounts for one billion tonnes of extractable bromine. Industrial sources of bromine include effluents or waste through which bromine is obtained by bromination process.

Demand for bromine is growing at a fast place which makes it a challenging task for manufacturers to stay apace. Globally, bromine compounds are being increasingly sought-after as raw materials in various end used in oil & gas and petrochemicals. Major consumers of bromine include oil producing companies, pharmaceutical companies and chemical industries.

Ever since its discovery, bromine has found high applicability in myriad end uses such as water treatment, fire safety, pharmaceutical production, and mercury emission reduction. In particular bromine is receiving notable attention for its flame retardant properties which make it suitable for a range of end uses as below

Production of bromine is done in a distillation column in which purification is achieved through the rectification by separating chlorine from water. Through this process bromine with a purity of 99% can be attained at the bottom of the separation column.

The manufacturing of bromine entails that these plants are at peak efficiency levels and columns have to be corrosion resistant.

Use of Bromine in Automotive Industry Drives Growth in Europe

Regionally, the US has maintained its position as the number one producer of Bromine. The US is also a key importer of bromine and its associated compounds. Its average import value saw an increase in 2021, up by 20% from 2018.

Following suit is Europe in which Germany is set to add significant clout to the market size for bromine. Automotive sector is a major driver of demand for bromine in Germany and accounts for the largest market share among all commodities that are exported out of Germany.

Anti-knock fluid applications and the use of bromine as a flame retardant is giving a boost to the bromine market in Germany. Following suit are countries such as Spain, France and UK which are using bromine as an emission reducing compound in batteries of electric cars to reduce environmental pollution.

A large chunk of the demand for bromine is also driven by the pharmaceutical industry in this region. Many compounds of bromine are being used in veterinary medicine as well as the manufacturing of sedatives and analgesics.

Sales of Bromine to Soar in Oil and Gas Drilling

This is proving to be a revenue hotbed for potential manufacturers of bromine. For instance, ICL-IP, a market leader manufacturing brominated brines supplies its recyclable CBFs to intermediaries who then formulate the brine and sell it to major oil behemoths such as Shell and Exxon.

Regions such as North America, in its quest to reduce its dependency on OPEC is investing heavily in the drilling of shale reserves.

Closing in is Asia Pacific which has a large number of shale gas reservoirs in which China holds the largest share for shale recovery. The incessant exploration for shale and consequent uptick in drilling activities in subsequently boosting the consumption for CBFs within this region.

The bromine market is highly consolidated with the presence of a few players who are dominating with a significant chunk of the overall bromine market. Some of the leading players in the market are Tosoh Corporation, Tata Chemicals, Jordan Bromine Company, Vinyl KFT and Lanxess AG.

Tosoh Corporation is one of the major manufacturers of Bromine in Asia. The company sells its bromine in its domestic market of Japan as well as in other parts of Asia.

Despite steady supply for bromine globally, countries such as China are witnessing a shortfall which is creating a demand supply gap. In keeping with this Tosoh is planning to expand its production capacity in order to offer a range of brominated products such as fungicides, agrochemicals and flame retardants.

TrustCapital LLC is expanding its footprint in Europe with large production hubs in Russia. Recently the company opened up a new bromine plant in Krasnokamsk. The plant will hold a capacity of producing 1700 tons of bromide per month. Investments to the tune of US$ 7 million have been made towadrds the first stage of the plant which will see completion by the second quarter of 2020.

Through this, the company plans to supply bromine locally and within the European market. Further, the plant also intends to produce ammonium bromide, calcium bromide and zinc bromide. In 2019 the company’s revenues accrued from exports of bromine products amounted to US$ 10 million.

Bromine Market Future Outlook – Charting its Impact on the Environment

Brominated flame retardants are now all pervasive and have left a ubiquitous impact on the environment. Many industrial set-ups that are producing Brominated Flame Retardants (BFR) as well as facilities that are using them in consumer-packaged goods are releasing toxic chemicals into the environment at the time of processing or carrying out some manufacturing practices.

Product disposal using various forms of combustion, recycling and leaching from various landfills is another route of entry for BFRs in the environment. The levels of BFR are highest in the areas or facilities that manufacture them.

The various properties of BFRs that make them highly versatile and suitable as flame retardants such as chemical stability and high adsorption also make them highly unsafe for the environment.

As per new legislations in US, manufacturing of Octa- BDE and Penta- BDE has been clearly banned in many countries of Europe. However, some parts are still seeing the high utilization of these products which means that their adversarial impact on the environment will continue for their entire product lifecycle.  With their high presence in the environment, it is hardly surprising to also find them in the tissue of both wildlife and humans alike.

Halogenated flame retardants are gradually being phased out due to the threat that they pose to the environment. Within regions, efforts are being championed to develop safer alternatives that leave a lesser impact on the environment.

Over the last decade, regional governments across the world have instituted stringent regulations with regard to the release of hazardous materials. For instance, in Europe has enforced Waste Electrical and Electronic Equipment (WEEE). This ensures adequate recovery and recycling of brominated flame retardants used in electronic equipment. This has enabled manufacturers to mitigate the toxicity of BFRs to some extent.

How much is bromine market worth?

What is the demand outlook for bromine market?

With growing demand for brominated flame retardants, the bromine market is expected to grow at a CAGR of 2.7% between 2021 and 2031.

At what rate did bromine market grow in the last five years?

What are the key trends shaping the bromine market?

Establishment of new manufacturing units, acquisitions, collaborations and partnerships are some of the key trends prevailing in bromine market.

What is the North America bromine market outlook?

North America market is expected to register a CAGR of 2.4% during the forecast period owing to the increasing investments in oil and gas drilling activities.

At what rate will the bromine market grow in Europe?

Which countries are the key producers of bromine?

The U.S., China, Jordan and Israel are the key producers of bromine.

Who are the key exporters of bromine?

The key exporters of bromine are Israel, Jordan and China.

What is the bromine market statistics in South Korea and Japan?