Cloud computing to boost the profile of the global notebook market

Rapid advancements in cloud technology, greater security concerns, and the need for continuous Internet connectivity are a few of the factors expected to lead to a shift towards cloud solution providers. Cloud computing allows users to store data and run applications seamlessly over the Internet instead of storing them on physical hard drives, reducing the requirement for high-powered energy-sapping processors found in corporate computing devices.

The notebook market is predicted to directly benefit from this notable shift as notebooks have a diverse range of hardware configurations and are perfectly suited to functioning in a cloud-first environment within a competitive price range.

A high disposable income is the primary factor that allows consumers in these influential regions to spend hundreds of dollars on premium business notebooks and gaming notebooks in the global notebook market.

Furthermore, developed regions have made automation a priority along with the development of the IoT market. IoT is poised to revolutionize all technological devices and applications ranging from consumer electronics to automobiles.

Corporate offices larger than gaming and others in the notebook market 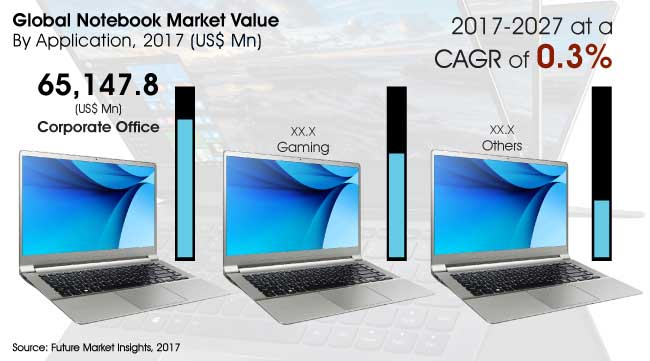 BYOD a major threat to the global notebook market

Smartphones are no longer a luxury device and have become commonplace in the developed world and a necessity in emerging markets. The processing power of smartphones is growing at a scarcely imaginable rate and it is not hard to imagine a day in the future where they may be as powerful if not more than conventional notebooks.

In addition to this, several organizations have adopted a BYOD or bring your own device policy wherein employees are permitted to use their personal smartphones for official purposes. The availability of a wide range of dedicated apps for transportation, navigation, banking, and shopping make smartphones the primary computing device for a large section of the population.

This could have an adverse impact on the global notebook market in the medium term. For e.g. – The Federal Reserve Board estimated that more than 75% of mobile phones in the U.S. were smartphones in 2015 from approx. 61% in 2013.

High cost a key concern among consumers in the notebook market

Notebooks are often expensive and this can prove particularly challenging for consumers in emerging economies in the APEJ, Latin America, and MEA regions. Consumers there are typically more price-sensitive and may not be able to afford the latest and greatest products sold in the global notebook market.

The APEJ notebook market by application is poised to be worth just under US$ 34 billion in 2017 with the lion’s share being taken by the Corporate Office segment. A few emerging economies have high import taxes and governmental duties on imported goods to encourage domestic production.

These countries may not be able to manufacture notebooks indigenously in the present day and thus, high taxes act as a major impediment in the regional notebook market.