An Incisive, In-depth Analysis on the Palletizers Market

This study offers a comprehensive, 360 degree analysis on the Palletizers market, bringing to fore insights that can help stakeholders identify the opportunities as well as challenges. It tracks the global Palletizers market across key regions, and offers in-depth commentary and accurate quantitative insights. The study also includes incisive competitive landscape analysis, and provides key recommendations to market players on winning imperatives and successful strategies.

The key driving factor propelling the demand for palletizers globally is the continuously advancing technology for the palletizing systems and increasing availability of economical palletizers. The global palletizers market is projected to expand with a CAGR of 4.9% by the end of 2028.

With increasing price of industrial land area, the requirement of efficient storing and setting up a facility have also increased. For handling large volume of material, material handling equipment are preferred to achieve high productivity. Along with manufacturing facilities, palletizers are often required at warehousing facilities to serve complex orders efficiently in minimum lead time. Palletizers are capable of handling very high load which is not feasible in manual palletizing, at high speed and with minimum probability of mishandling of the material. Continuous developments introduced in the palletizers have resulted in low floor space consumption and highly productive operations. 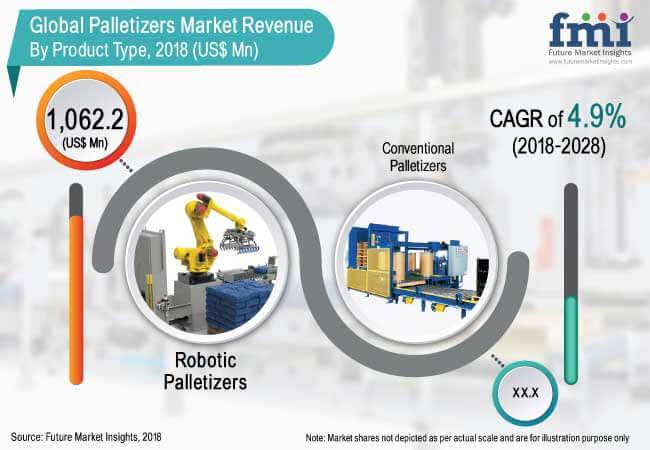 Several advancements such as implementing artificial intelligence in the robotic palletizers has enhanced the system’s operational capability. Despite several developments, the conventional palletizers have shown higher productivity by handling very high loads at high speed which is difficult to achieve with a robotic palletizers. Mixed-case palletizing capability has enhanced the stability of the pallet by arranging differently sized cases in a stable form. Also, mixed-case palletizers can arrange bags in a pattern which results into high stability for the pallet. With the enhanced stability of the pallet, the floor space required to store the volume of material is greatly reduced. The key players in the market have developed palletizers which can be accommodated in the industry 4.0 standards. All these technological developments have reduced the impact of various restraints on the demand for palletizers.

This report provides forecast and analysis of the palletizers market at the global level. It provides historical data of 2013-2017 along with forecast from 2018 to 2028 in terms of revenue (US$ Mn) and volume (Units). The report also includes macroeconomic indicators along with an outlook on packaging demand and industrial robots demand globally. In addition, it includes global drivers, restraints and recent trends of the palletizers market. The report also comprises the study of opportunities for palletizers manufacturers and also includes detailed value chain analysis.

In order to provide users of this report with comprehensive view of the market, we have included detailed competitiveness analysis and company players with their SWOT analysis and strategy overview. The dashboard provides detailed comparison of palletizers manufacturers on parameters such as operating margin, total revenue, product portfolio, and what we call ‘innovation scale’. The study encompasses market attractiveness analysis by machine type, product type, end-user industry, and region.

On the basis of product type, the global palletizers market is segmented into cases & boxes, bags & sacks, pails & drums, trays & crates and bundles.

On the basis of end-user industry, the global palletizers market is segmented into food, beverage, pharmaceutical, cosmetics, chemical, building & construction and others (ceramics, glass, etc.)

A number of primary and secondary sources were consulted during the course of the study. Secondary sources include Factiva, World Bank, Packaging Digest, Hoover’s, and company’s annual reports and publications.