2020 Analysis and Review: Global Robotic Palletizers and De-palletizers Market Analysis by Place- Factories, Distribution Centers, Fulfilment Centers and others for 2020-2030

The robotic palletizers and de-palletizers market have been have been consistently expanding since the past decade and is expected to sustain the growth in the upcoming years. Due to increasing inclination towards e-commerce shopping and doorstep deliveries, packaging manufacturers or warehousing companies have come across ample opportunities to grow globally.

However, various constraints of labors including the work speed or strength limitations have resulted in the popularity of robotic palletizers and de-palletizers among them.

The COVID-19 pandemic has further helped in the robotic palletizer market growth as the new social norms have resulted in an increasing number of consumers opting for online shopping rather than visiting physical stores.

Some of the leading market players such as ABB Ltd. and Fanuc Corporation, have started adopting modern technologies like Artificial Intelligence (AI) in order to improve their manufacturing process.

Despite of a few affecting factors like shutting down of manufacturing units due to lock down or additional costs required for programming, the global palletizers and de-palletizers market is likely to rise at 4.9% CAGR during the forecast period, starting from 2020 to 2030.

Manual palletizing and de-palletizing method requires quality training of labors. Despite this, it is impossible to achieve the desired outcome in terms of time and precision, also manual methods is not completely feasible for heavy pallet loads. There is always probability of pallets getting mishandled or destructed.

Usage of modern technologies is further catering to the expansion of the global market and reducing the costs incurred on maintenance or damage of the machine equipment. All these positive driving factors are resulting in continuous growth of the global robotic palletizer market.

High price being a major key restraint for the market, restrict its usages only among the large output manufacturing companies. As the modern technologies of robotic palletizers and de-palletizers require additional cost, it has been excluding low and medium manufacturers for a long time.

A lot of manufacturing and warehousing facilities in China and other countries across Asia Pacific, Latin American, and Eastern Europe are aiding in expansion of the market by producing economical palletizers and the introducing layer palletizing and de-palletizing methods for the small-scale manufacturers.

According to Future Market Insights (FMI), East Asia, Europe and North America have been holding the leading market position in the past years (2015-2019) and tend to remain in the dominant position during the forecast period (20020-2030). By country, Germany to remain in the leading position of European market and tends to exhibit growth by 3.3% CAGR during the forecast period.

With the rapid digitization and increase in requirements for highly efficient systems, the robotic palletizers market have come to the fore. The inbuilt modern technical features, unlimited flexibility unlike the conventional methods, have resulted in higher uptake of robotic methods. As demand, packaging styles and patterns are evolving rapidly, robotic palletizing and de-palletizing methods are gaining immense traction for their versatility.

Surge in Demand due to COVID-19

COVID-19 pandemic in the recent years has given a new dynamic to the e-commerce segment as more consumers are opting for online purchase and at-the-door delivery which in turn is increasing the demand for robotic palletizers and de-palletizers as various manufacturing and warehouse units are experiencing huge demand of packaging in modern styles and patterns. As the requirements have evolved, the robotic palletizing has become the first preference for manufacturing units instead of the conventional palletizing methods.

While there have been a few positive impacts due to the novel coronavirus pandemic, most of the manufacturing units have experienced shut down for a long time affecting the supply chain of companies globally. As the packaging industry got affected due to extended period of lockdown and discontinuation of manufacturing units in the leading countries like Europe, Asia, North America, and other regions, the robotic palletizers and de-palletizers market has been witnesses decelerating growth in the recent time.

As North America has been severely affected by COVID-19 pandemic, the market got disrupted due to the difficulties faced by the robotic palletizers & de-palletizers manufacturers. Shut downs of production plants, recession in jobs, labor strikes, economic crisis and other negative factors have slowed down he market growth which tends to remain in the following years.

While the North America market value expanded by CAGR of 3.5% during the last five years (2015-2020), it is expected to exhibit similar growth of 3.5% CAGR during the forecast period (2020-2030). By country, U.S. and Canada will hold the leading place, while U.S. and Canada palletizer market will grow by 3.4% and 4.0% CAGR respectively throughout the forecast period.

Request a sample  specific to the North America Market

Europe is the second largest robotic palletizers & de-palletizers market in the world, it is also third-most affected region by COVID-19. Though the leading countries like Spain, France, Italy, Russia, United Kingdom and others got severely affected, the overall market tends to grow in the following years. 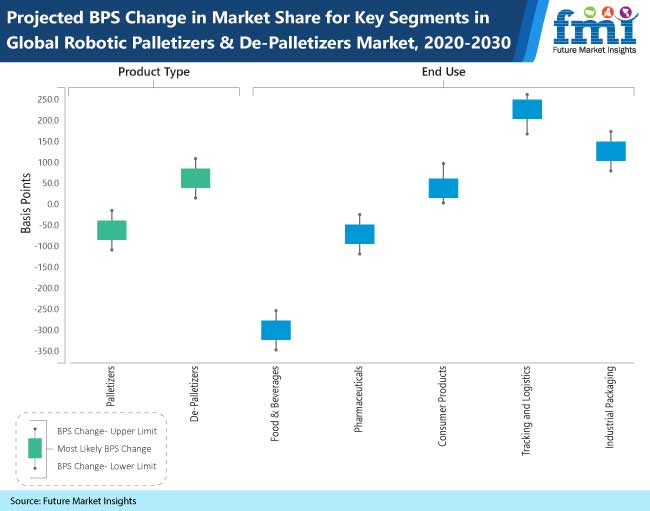 As per the research by FMI analysts, the overall market growth of Europe market volume was 4.4% CAGR during 2015-2020. Due to the affecting factors, the European market is to face a decline in its growth of market volume resulting an expansion by 4.3% CAGR during the forecast period (2020-2030). As per FMI research, the Europe de-palletizers market value will expand by 4.0% CAGR throughout the forecast period.

Request a sample specific to the Europe Market

Middle East Asia (MEA) being the dominant market player experienced growth by 2.5% CAGR in the robotic palletizers market. In the current year the supply chain have been affected for the ongoing pandemic.

However, the manufacturers are getting back to normalcy due to the abundance raw materials in this region. The MEA market is expected to grow by 2.8% CAGR throughout the forecast period. North Africa, South Africa, Turkey and others to remain key players in the upcoming years (2020-2030).

Request a sample specific to the Asia Pacific Market

The boxes or cases segment in the global palletizers market to dominate the market in the product type category.

Factories being the dominant segment in the category by place, is set to exhibit an increase in growth during the forecast period, resulting in 3.8% CAGR during 2020-2030.

Articulated robots have taken a significant place in the global market due to its versatile efficiency in welding, assembling, material handling, cutting, picking etc. As per the research by FMI, articulated robots being the key segment in the machine type category is expected to surge at above 3% CAGR in the coming years.

Though the recent coronavirus have affected the food and beverages industry significantly, the sector is expected to lead among application-wise categories in the years from 2020 to 2030.

In order to maximize the production quantity, expand the global reach, emphasize on the product quality and diversify the product portfolio, some of the leading market players such as KUKA AG, ABB Ltd., and others are adopting the modern technical equipment and procedure.

At the same time, the manufacturers have started pacing up their productions and taking up strategic solutions to make up for the work-lag during the lockdown period of this year.

Mitsubishi Electric Corporation has just announced the release of their new EcoAdviser data-analysis and diagnostic software (MES3-EAP1-A1) in order to increase the energy savings in their manufacturing units on October 19, 2020. Their brand-new innovative software with their branded AI-technology is set to launch on October 26, 2020.

The dominant market player KUKA AG has released their full range of automated solutions starting from the core component robot to the manufacturing cells, turkey systems and networked production with the aid of their advanced cloud-based IT tools.

Remtec Automation, LLC has come up with their advanced automated packaging solutions accomplished by their special purpose machines. They are offering the higher-rate-handling applications like packing, tray packing, kitting and others to keep their strong grip on the globally changing market.