Increasing demand from developed regions has concentrated the market in one place. The U.S. is the significant large market and accounts for a high number of robotic catheterization procedures. Corindus Vascular Robotics Inc., a subsidiary of Siemens AG, has operations only in the U.S. The company generated US$ 8 Mn in 2018, with sales solely in the country. Additionally, the company holds monopoly in PCI robotic catheterization systems.

Corindus Vascular Robotics Inc. has installed base of 52 systems globally and around 90% of the system are in the U.S. alone. Additionally, the company is installing new 16 devices per year on an average. The development of remote operated robotic catheterization system CorPath from Corindus offers higher advantage to teleoperator and experimental adoption of robotic systems together are expected to generate high revenue sales for the robotic catheterization systems market during the forecast period.

Manufacturers in North America and Europe are focusing on strategic tie-ups to leverage the experimental adoption of robotic catheterization systems. Such as participation of mayo clinic with Corindus Vascular Robotics to explore preclinical studies involving stenting procedure. This strategic reliance has primarily contributed to the growth of the robotic catheterization systems market.

Manufacturers have designed their robotic devices as open source architecture platform, which enable connecting with emerging and existing technologies. The main reason for integrating remote catheterization procedure is to limit the radiation exposure to surgical operator/technician and support staff.

For a surgical operator, performing some procedures while seated position and within lower-radiation level could possibly increase his/her productivity without jeopardising personal health. While catheter-based endovascular procedures are fetching much of attention in modern medicine techniques, robot-assisted catheterization procedures are not as prevalent because they demand new skills for operation. There is a steep learning curve associated with such procedures due to their complexity that can be time consuming and challenging for the surgeon. 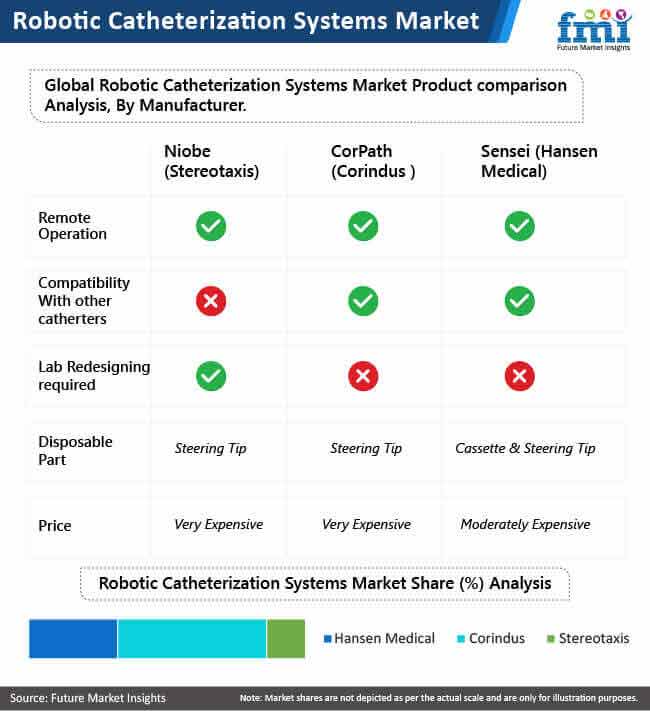 FMI opines that nonhospital-provider services, including cath labs and ASCs will encroach a major portion of robotic catheterization systems market through 2029. Furthermore, hospitals, particularly in Europe, are extending their hands to establish and run their cath labs in line with the shift towards operational expenditure.

North America preserves its preeminence in robotic catheterization systems market. However, gradual approvals to robotics for healthcare applications stood as a major roadblock facing North American market. Since cardiovascular disorders (CVDs) remain leading cause of mortality in the U.S. and around half of the elderly continue to complain of some kind of CVD, Centers for Medicare and Medicaid Services (CMS) are providing reimbursements for peripheral access procedures, such as inserting port or a catheter into a large central artery that is within the purview of heart.

Incidents of congestive heart failure increased by 5-10%, while that of acute myocardial infarction surged by 15-20% in 2017. Market in North America thus witnessed a sudden spike in revenues post 2017, as FDA approvals gathered momentum.

Although robotic catheterization systems carry benefits of minimal post-surgery effects and decreased recovery time, they are subject to high initial investments. In North America, Europe and Oceania, average price of electromechanical robotic catheterization systems is greater than US$ 600,000, exclusive of ancillary equipment costs. Inadequacy of skilled operators echo the need for additional training, which further adds to operational expenses.

With the advent of robotics in the repository of interventionists, robot-assisted percutaneous coronary intervention (PCI) has become predominant in treating coronary artery disease (CAD) which leads to heart failure.  As surgical robotics is projected to mushroom at a healthy rate over the course of near future, robotic catheterization systems will witness a solid hike in sales for PCI. Moreover, adoption in cardiac electrophysiology procedures (CEPs) will remain steady throughout the period of projection.

The global robotic catheterization systems market is segmented in detail to cover every aspect of the market and present a complete market intelligence approach to the reader.