Geographically, the global analgesics market is expected to be dominated by North America due to increasing burden of pain management and adoption of premium-priced opioids. The growing number of surgeries and prevalence of cancer coupled with penetration of effective pain management medications are the other factors expected to fuel the growth of the analgesics market in the region.

China is expected to be second large market for analgesics due to increasing number of surgical procedures as well as prevalence of cancer and neuropathic pain. Usually, non-steroidal anti-inflammatory drugs (NSAIDs) are used in China for pain management, but from the last decade the adoption of opioids for pain management has increased at a significant rate.

Besides, extended efforts are been made by various analgesics manufacturers to increase their market footprints by undergoing collaborations, partnerships, mergers and acquisitions with local analgesics drug manufacturers, e.g., Purdue Pharma L.P. and Mundipharma International extended their opioid product portfolio in China in 2014 and 2018, respectively.

In terms of revenue share, Canada, Germany and France stand at the third, fourth and fifth place, respectively, in the analgesics market. By region, Western Europe is expected to be the second large analgesics market due to high penetration of analgesics for pain management. Asia Pacific is expected to witness fastest CAGR of 8.0% (2018-2028) owing to increasing adoption of advanced pain care drugs, government initiatives to spread awareness and various welfare schemes. 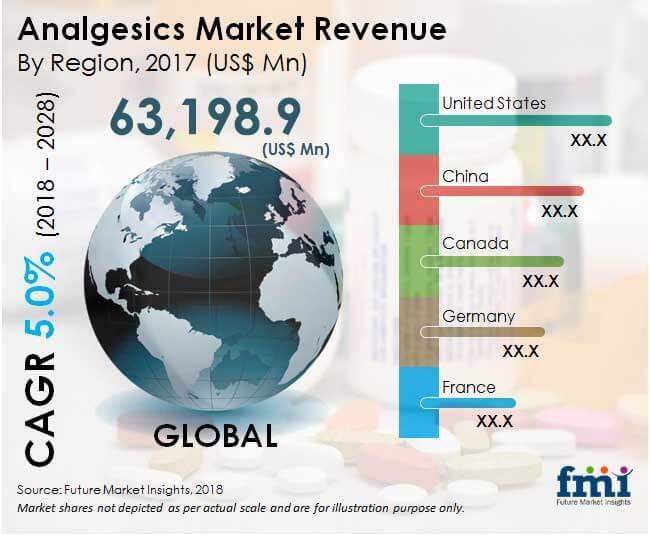 Factors and Trends Impacting the Growth of the Market

The Analgesics Market is Segmented Based on:

By drug class, the global analgesics market is segmented as opioids, non-steroidal anti-inflammatory drugs (NSAIDs), local anaesthetics and acetaminophen. The drug class segment is analysed by both prescription analgesics and OTC analgesics. Opioids is expected to remain the dominant segment due to their higher efficacy in pain management. The premium price of opioid also helps it to generate more revenue as compared to other types of analgesics. The adoption of opioid analgesics is higher in North America and Western Europe due to reimbursements and easy availability. Whereas, NSAIDs analgesics are highly adopted in Asia-Pacific, Eastern Europe and Latin America.

By distribution channel, the global analgesics market is segmented into hospital pharmacies, retail pharmacies, drug stores, clinics and others. This considers revenue generation by prescription analgesics and OTC analgesics separately.