Crotonaldehyde is a mixture of E- and Z-isomers, which makes it moderately soluble in water, but allows the formation of a homogenous mixture when added with organic solvents.

Existing in liquid form, the chemical has no color, but can turn pale yellow when subjected to reactions, and has a pungent odor. For commercial purposes, crotonaldehyde is manufactured from acetaldehyde using the aldol condensation process.

The growth of the market is majorly attributed to the continual adoption of crotonaldehyde in chemical and food industries, where it is used as an additive and surfactant.

Likewise, it is gaining prominence as an additive in the production of insecticide to kill multiple species of insects. Usage of crotonaldehyde in the production of sorbic acid - a food preservative - and trimethylhydroquinone - a precursor to the vitamin E - has been identified as the major application in the chemical industry, which is poised to remain a crucial end-use sector through the forecast period.

Crotonaldehyde is gradually gaining traction in numerous end-use sectors such as textile, paper, and leather tanning.

Owing to its chemical properties, when mixed with water at normal atmospheric pressure, crotonaldehyde forms an azeotrope composed of 25% water.

On the back of its aldehyde function and a conjugated double bond within the aldehyde, crotonaldehyde is capable of taking part in numerous reactions, thus becoming a vital starting product in the process of chemical synthesis.

Crotonaldehyde acts as an effective solvent for several vegetable and mineral oils, fats, waxes, natural and synthetic resins as well as elementary sulfur. The aforementioned factors make it an ideal component for usage in the production of several chemical additives.

When it comes in contact with oxygen, crotonaldehyde forms a peroxide and then forms crotonic acid, while in the presence of mineral acids (traces) it undergoes polymerization.

Due to its duality in reactions, crotonaldehyde has become an ideal component for multiple reactions and chemical processes in the chemical sector. For instance, it is suitable to undergo polymerization, and dehydration with several compounds facilitate adoption in the plastic and paper industries, where it is made to copolymerize with PVC and take part in plasticizer synthesis.

Crotonaldehyde finds application as a warning agent in fuels, as alcohol denaturant, as a stabilizer for tetraethyl-lead, in the preparation of rubber accelerators and in leather tanning applications.

Use in the Production of Chemical Additives

Crotonaldehyde’s usage as a precursor of fine chemical is anticipated to remain its primary application through the assessment period. Crotonaldehyde is an essential component in the production of sorbic acid, a natural organic compound used as a food preservative in the food & beverage industry.

In the recent past, the demand for packaged food has witnessed a remarkable upsurge, owing to hectic lifestyles among consumers across the world.

As an increasing number of consumers seek packaged food with long shelf life, the demand for boric acid is expected to rise in the future, subsequently driving the demand for crotonaldehyde.

Likewise, chemical components such as crotyl alcohol, nu-butanal, and n-butanol, which are derived by the reduction of crotonaldehyde, and are subsequently used as solvents in the manufacturing process of varnishes, chemical synthesis, and as a fuel.

When crotonaldehyde is made to react with urea, it results in the formation of crotonaldehyde ureas, which finds wide-scale application as slow-release fertilizers. Moreover, crotonaldehyde is also used in the production of thiophenes, quinaldines, pyridines, pharmaceuticals, dyes, and pesticides, further boosting the growth of the market.

As the paints and coatings market is set for healthy growth during the forecast period backed by surging demand across construction, automotive, transportation, and electronics, the crotonaldehyde market is expected to benefit from it in the form of augmented adoption in the production of paints and coatings.

Crotonaldehyde is considered as a highly hazardous chemical that can potentially lead to severe effects among humans upon excessive exposure. The health hazard associated with the component is expected to pose a challenge to adoption to an extent during the forecast period.

Several studies have proven the ill effects of inhaling crotonaldehyde such as irritations and chemical burns on the skin. Prolonged exposure to crotonaldehyde can lead to a build-up of fluid in the lungs and subsequently death in severe cases. This is likely to hinder the adoption in the end-use sector, considering it poses a risk to the well-being of the working personnel involved.

While the degree of intensity varies from person to person, coming in direct contact with crotonaldehyde can cause moderate to severe irritations and allergies on the face, throat, and stomach.

While people working closely with the chemical take appropriate measures to avoid these side effects, these physical risks can be mitigated. However, deep inhalation of the chemical will result in long-term respiratory illnesses. This has become a cause of concern among consumers and manufacturers alike, with both the parties seeking safer alternatives.

On the other hand, being a highly mobile liquid, it sinks into the soil surface and can potentially contaminate the groundwater. On the back of these facets, the US Emergency Planning and Community Right-to-Know Act has listed crotonaldehyde as an 'extremely hazardous substance' which is also likely to hold the adoption to an extent.

East Asia, which currently is the largest market for crotonaldehyde, will maintain its lucrativeness throughout the forecast period. The region's lucrativeness is majorly attributed to the wide availability of raw materials, coupled with the presence of flourishing chemical sectors in emerging economies such as China, Indonesia, etc.

The region is expected to grow 1.6X times in value during the assessment period, with China holding the lion's share, both in terms of value and volume. Moreover, China is registering the fastest growth in terms of petroleum products and the demand continues to increase year-on-year.

Several key manufacturers are focusing on directing their efforts towards China, which is poised to account for more than half of the overall consumption of crotonaldehyde in East Asia.

North America - forefronted by the US - is projected to hold the second-largest share in the global market value through the assessment period. Consumption of crotonaldehyde is propelled by the adoption in the production of sorbic acid, which finds application in the region's packaged foodservice industry.

Packaged food products are of high prominence in the US, attributed to long, frenetic working hours that little time to cook food, thereby compelling the working-classing consumer demographic to seek packaged foods.

Since sorbic acid is majorly used as a food preservative in packaged food, the growing demand for packaged food, in turn, drives the consumption of crotonaldehyde.

In addition, the players in the region are also known for their cost-effective and advanced production methodologies, which facilitates wide production and supply of crotonaldehyde and wider profit margins

Europe will remain a prominent regional market for the crotonaldehyde market and is foreseen to grow 1.4X in value during the assessment period. The healthy growth of the region is primarily linked to the presence of a thriving paints and coatings sector.

The region is also among the leading producers of paints and plastics, which drives the adoption of crotonaldehyde. Although the region faces certain challenges such as rising labor wages and stringent government guidelines, the growth of the crotonaldehyde is poised to remain unhindered for the years to come.

Request a samplespecific to Europe market 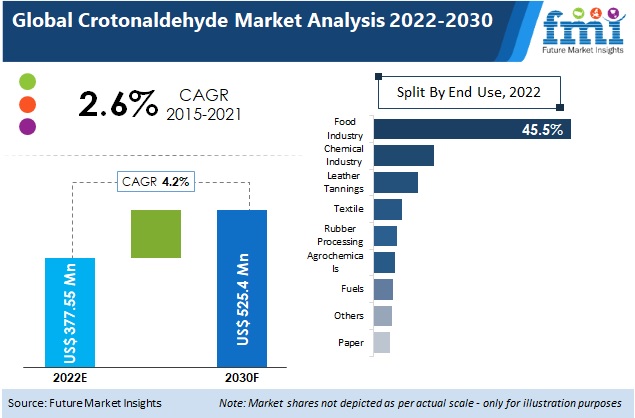 The consumption of the chemical composition is driven by its composition and the homogeneity it offers when mixed with other chemicals or materials.

On the basis of end-use, rubber processing and leather tanning sectors are projected to cumulatively account for more than over 3/5th of market value, with the former holding majority of the share. This is attributed to the chemical’s capability to indulge in polymerizations and other chemical processes that make it ideal for usage in the aforementioned sectors.

Closely monitoring the ever-evolving economical facts, crotonaldehyde manufacturers are focusing on maintaining the ideal pricing of their products. On these lines, expansion of production capacities and investments in research and development activities, and acquisitions have also been identified as key growth strategies adopted by market players to strengthen their foothold.

In April 2020, Celanese Corporation announced the acquisition of all of Nouryon's Europe and Asia re-dispersible polymer powders business.

In the year preceding it, Celanese Corporation expanded its Methanol production to 1.7 Mn Tons per annum at their plant in Pasadena, Texas, USA. On the other hand, Godavari Biorefineries Ltd. emphasizes geographical expansion for progress and has a sales presence in over 55 countries.

What is the market size of the crotonaldehyde market?

The global crotonaldehyde market is expected to reach a valuation of US$ 535 Mn by 2030.

Which is the largest market for crotonaldehyde?

Which are the top companies in the crotonaldehyde market?

The rubber processing segment is expected to channel the majority of revenue to the crotonaldehyde market through the forecast period.

What is the outlook on the crotonaldehyde market?

The growth of the crotonaldehyde market is primarily attributed to the increasing adoption in the production of sorbic acid.