Loudspeaker Market: Need for Devices in Outdoor Environments Such as Theatres and Concert Halls to Drive Growth: Global Industry Analysis 2013 - 2017 and Opportunity Assessment 2018 - 2028

Loudspeakers, as considered under the scope of the report titled “Loudspeaker Market: Global Industry Analysis 2013 – 2017 and Opportunity Assessment 2018 – 2028,” are electronic transducers that convert an electrical audio signal into a corresponding sound.  An alternating current electrical audio signal is applied to the input of loudspeakers, where it reaches the voice coil, following which the coil moves repeatedly back and forth as per the faradays law of induction and causes the diaphragm (in most cases) to move and push the air to produce sound.

Speakers and loudspeakers are considered to be the same device as both produce sound by converting an electrical signal into sound. There is only one difference between a speaker and a loudspeaker, which is that loudspeakers are capable of producing a loud sound, i.e., they are speakers that have a high wattage rating.

The global loudspeaker market is expected to register a CAGR of 7.3% during 2018 – 2028, with North America and Southeast Asia & others of Asia Pacific economies accounting for an approximate market share of 40% by the end of the forecast period. 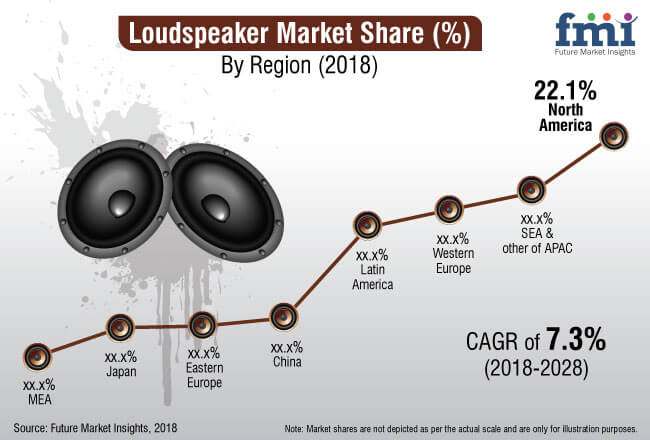 Loudspeakers have become a top priority for outdoor entertainers as well as for cinema halls and restaurants. The growing popularity and increasing applications of loudspeakers at different places is among the key drivers of the loudspeaker market. The growth of the music streaming industry has also supported the loudspeaker market to a great extent. This has encouraged the adoption of loudspeakers for indoor use as it has become easier for users to access the content of their choice on-demand, thus eliminating the need for depending upon other sources such as cassettes and compact discs.

Loudspeakers have been popular among people who have a refined sense of music. Today, people who buy loudspeakers for home or indoor usage want these systems to produce sound of a higher quality as compared to normal speakers. Loudspeakers have different kinds of drivers for producing sound at specific frequencies, which responsible for the production of refined sound.

Different kinds of drivers are embedded into loudspeakers. Subwoofers, a sub-category of the woofer driver, is used only for the production of lowest-pitched sounds in the audio spectrum that are below 200 Hz for consumer systems and below 100 Hz for professional live sound. Woofers are drivers that are specifically made for low frequencies.