According to the research report published by Future Market Insights, the global orthobiologics market is expected grow at a slow rate during the assessment period 2017-2027. However, it did not reflect slack or negative growth since past years and is likely to show a slow yet an upward rise in the coming years.

The increased incidences of trauma cases, lifestyle related diseases and other chronic disorders have led to rise in number of orthopaedic surgeries at a global level. This growing trend is anticipated to increase the sales of orthobiologics products in present and forthcoming years.

Emergence of online sales channel and government initiatives bot are contributing to the growth of the market. Manufacturers are focussed on creating sales directly through their company’s website to target more customers and without the interference of third-party distributors. This enables the manufacturers to eliminate the variation in product pricing owing to the involvement of third-party suppliers.

This trend is observed in the current market scenario and is expected to continue over the period of assessment. In 2017, bone graft substitute segment registered a value of US$ US$ 2521.6 Mn and is according to the growth trend exhibited by this segment, it is estimated to reach a market valuation of above US$ 3 Bn by the end of 2027. During the forecast period of 2017-2027, it is poised to reflect a CAGR of 3.0%. 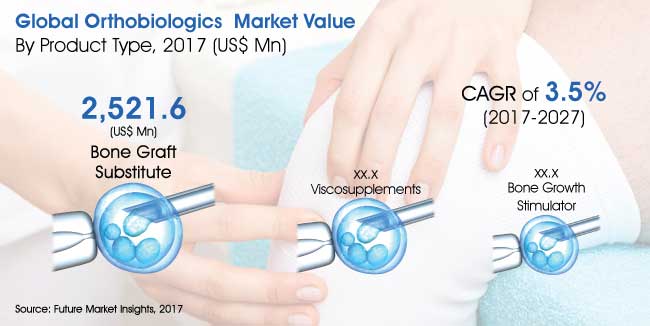 Bone graft substitute segment is further analysed and divided into allograft, xenograft, synthetic and bone morphogenetic protein sub segments. Of these, xenograft sub segment is expected to run at the highest pace to register a meteoric CAGR of 10.0% throughout the period of forecast. This segment is the second largest in terms of market value. Allograft and synthetic sub segments have a large yet almost equal contribution to the revenue of the parent segment.

The allograft sub segment is estimated to reach a valuation of US$ 937.5 Mn leading other sub segments. However, the synthetic sub category is poised to grow at a relatively higher rate than allografts in the coming years.

The global orthobiologics market is segmented in detail so as to cover every aspect of the market and present a complete market intelligence in front of the reader.