About the Phospholipids Market

The market for phospholipids is expected to witness surge in demand owing to increasing application in cosmetics, nutrition & supplements, pharmaceutical and industries. Moreover, consumer inclination towards naturally sourced ingredients is driving the phospholipids market. Additionally, increasing awareness about healthy life style with rising consumption of functional and convenience foods are increasing the use of phospholipids ingredient in final product.

Phospholipids are important for health and they act as a key component of cell membranes and facilitate transportation and absorption of essential omega-3 fat in the body. These factors are responsible for increasing use of phospholipids as a key ingredient in various food products.

In its new study, ESOMAR-certified market research and consulting firm Future Market Insights (FMI) offers insights about key factors driving demand for phospholipids. The report tracks the global sales of edible nuts in 20+ high-growth markets, along with analyzing the impact COVID-19 has had on the food and beverage industry in general, and phospholipids in particular.

How the Historical and Future Outlook for Phospholipids Market Match Up?

The positive effects of dietary phospholipid have been mentioned from early 1900’s in relation to different symptoms and illnesses such as cancer, coronary heart disease and inflammation. According to FMI’s analysis, phospholipids sales has grown 5% CAGR between 2016 and 2020.

In developing countries such as Brazil, Argentina, India and others, investment in healthy foods, pharmaceutical, and nutraceutical products is increasing. Additionally, awareness about various natural cosmetics and personal care products in the developed countries has triggered the demand for phospholipids.

Natural phospholipids have been witnessing increasing demand since they are produced from renewable sources, with more ecologically friendly processes and are available in larger scale at relatively low costs compared to synthetic phospholipids. In addition, they are used in products for any administration route and are fully accepted by regulatory authorities. In contrast, synthetic phospholipids are only used in a few pharmaceutical products. These factors are enabling growth in the phospholipids market at a CAGR of 7.4% in the forecast period 2021-2031.

Why is there Surge in Demand for Phospholipids in Cosmetic Industry?

Consumers are becoming more careful about appearance and are using various cosmetics and cream to maintain their skin. But the cosmetic products available in the market have many chemicals which can damage the skin and may cause skin irritation. Hence, people are inclining towards cosmetics made with ingredients derived from natural sources.

Phospholipids are considered an ideal component because of their natural origin and multifunctional properties that help in solving various skin problems. Hence the demand for phospholipids is increasing, a trend which is expected to continue though the forecast period and will catapult the cosmetics and personal care industry as a key end user.

Why are Phospholipids Used in Food Sector?

Phosphatidylcholine (PC) is a phospholipid attached to choline particle. Lecithin is a part of phospholipid which is made up of PC. Food products that contain lecithin are considered as the best dietary source of PC. PC helps to boost cognitive function, it improve liver function and keep in control the cholesterol level.

Moreover, some medicine such as NSAIDs nonsteroidal anti-inflammatory drugs may cause gastrointestinal side effects such as intestinal perforation, stomach pain and gastric bleeding. PC helps in preventing gastrointestinal damage. Furthermore, phospholipids have been an essential ingredient in infant formula with containing rich source of omega-3, omega-6 and fatty acids. Phospholipid is gaining traction in the infant supplementary industry also. The health attribute associated with phospholipids will boost the market.

How is Multiple Application of Phospholipids Propelling Growth?

The demand for phospholipids is increasing due to its versatile application in different sectors. This is particularly true in case of phospholipids derived from natural sources. The availability of raw material had enabled manufacturers utilize the resource and expand their product portfolio. Hence, they are investing more on R&D to innovate products. Key players of global phospholipids are focusing on new product launch and offer wide range of products to the customers in the market.

How big is the Opportunity in India for Phospholipids Sales?

Increasing consumer preference towards green and natural components have fuelled the demand for phospholipid products in the market. With the increase in young population and growing awareness towards health, more consumers are opting for healthier alternatives like food supplements.

Owing to increase in demand as functional food and easy availability of raw materials the demand for phospholipids is expected to surge. The increasing demand of phospholipid for nutraceutical for treating illnesses like aging problem and cognitive disorder is will enable growth in the country, especially since consumers are likelier to spend on maintaining a healthy living.

Why the Demand for Phospholipids is rising in Argentina?

Due to changing lifestyle and urbanization, the demand for packed and convenience foods is rising and this is in turn fuelling the demand for phospholipids in the market. Consumers in Argentina are progressively looking for wellness and health packed food.

Phospholipid is used as an emulsifier in food industry, flow agent for manufacturer of chocolate, baking stabilizer, wetting agent for food instantising and animal feed additive. Infant formula segment is one of the fastest growing segment. Many companies are producing baby food and supplement such as DHA/ALA. This attribute will impact positively the phospholipid based nutritional supplement segment in the market.

What are the Factors Driving Phospholipid Sales in U.S?

The U.S is expected to witness surge in the demand of phospholipid over the forecast period. Increasing demand for cosmetic products and rising willingness to spend on haircare and skincare products including natural ingredients will boost sales in the country.

Expansion of the cosmetics sectors will remain a chief driver of the market in the U.S. The U.S. also has emerged as a key market for packed food. However, increasing focus on health and wellness have rendered consumers skeptical about ingredients used in food. This has been compelling manufacturers to include natural ingredients, which will aid the expansion of the phospholipids market in the U.S.

What is Driving Phospholipid Sales in China?

China is home to several thriving industries, food and cosmetics industries are included in the list. Food sector in China has remain a compelling proposition for foreign investors. According to 2019 Taobao Food Live Streaming Trend Repor, dietary supplements are among the list of popular foods in live shows in China. This is indicative of attractive prospects for the expansion of phospholipids market in China.

Which is the Key Application of Phospholipids?

The fast altering consumer standard of living and increasing health awareness amid consumers, specifically in urban regions, have led to a sudden development of nutraceutical market. Additionally, increasing focus on general well-being and fitness is fuelling the demand for additional requirements of antioxidants, proteins, vitamins, and other. Increasing awareness about healthy food and living standard, has been fuelling the demand for nutritious food and supplements. This will in turn increase applications of phospholipids. 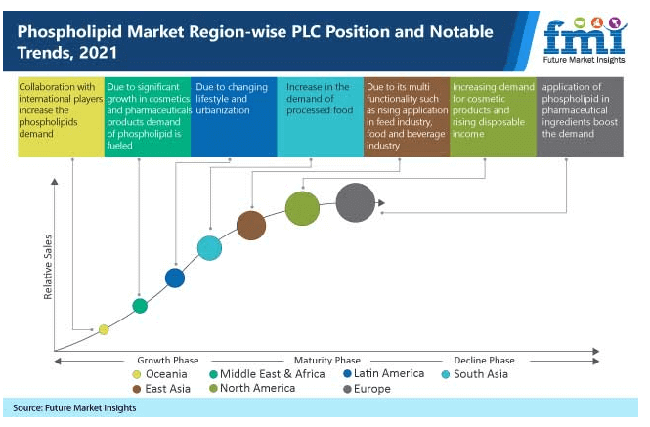 Why are Natural Phospholipids Preferred More?

Which is the Key Function of Phospholipids?

Phospholipid is used as an emulsifier because they migrate to interface between water and oil and reduce the inter-facial tension and stabilizing an emulsion. Emulsifiers are used in many food products because of to their ability to stabilize water and oil dispersions. Emulsifiers also control crystallization, prevent separation and reduce stickiness.

Phospholipids market is estimated to grow on account of increasing application in food and beverages, personal care, cosmetics products, and pharmaceuticals industries. Key manufacturers are focusing on strategic collaborations to gain competitive advantage:

Some of the leading companies operating in the phospholipids market are: