The global plant-based sausages market witnessed prolific developments in 2020, with revenues expanding at over 26% y-o-y growth. Global revenues are slated to surpass US$ 1 billion by 2021-end, after considering the COVID-19 induced downswing.

As health and environment concerns acquire precedence, the market for vegan and plant-based foods is ever expanding, paving way for a positive plant-based sausages market outlook through 2028. The market has received a significant push from the growing apprehension amongst consumers about possible infection contraction through meat consumption.

A combination of bottlenecks, ranging from COVID-19’s recessionary impact, logistical constraints and reduced demand from the food and beverages sector have ushered a downward thrust on the global meat market.

Furthermore, a study published by the University of Oxford in the pre-pandemic world revealed that a global shift towards a plant-based diet could accrue cost savings worth US$ 1.5 trillion and reduce greenhouse gas emissions by two-thirds.

These aforementioned developments have served to enhance the plant-based sausage market outlook. Numerous forays are occurring across potential markets, with manufacturers hoping to leverage this changing consumption paradigm to deepen penetration.

Premature deaths across low and middle income countries due to unhealthy dietary patterns is an emerging concern. As of 2017, unhealthy eating habits led to almost 11 million deaths globally, or 22% of the global adult population, mostly due to cardiovascular disease and cancer.

Majority of the fatalities and disabilities were attributed to excessive red meat consumption. Increasing total processed meat intake by half a daily serving or more is associated with a 13% higher risk of mortality from various causes.

Taking these developments into cognizance, a paradigm shift towards plant-based and vegan products is evident, thus leading to an expansion of the plant-based sausages market growth prospects.

While plant-based meat’s popularity is rising, numerous obstacles stand in the way of effective market proliferation. One of these obstacles is the controversy surrounding the labelling of plant-based meat products. Intense lobbying efforts are underway to resolve this lacuna.

For instance, the U.S FDA has established that only foods derived from food producing animals may be labelled as ‘meat’, ‘sausage’, ‘jerky’, ‘burger’ or ‘meaty’ items. In 2018, Missouri legislated a law which prohibited the representation of a product as meat “if not derived from harvested production livestock or poultry.”

These legislations are proving to be a hindrance as plant-based sausage manufacturers apprehend that they may limit market penetration of their product lines.

The Europe plant-based sausages market is the largest, expanding prolifically through 2028, attributed to a surging proportion of health-conscious consumers opting for meat alternatives. 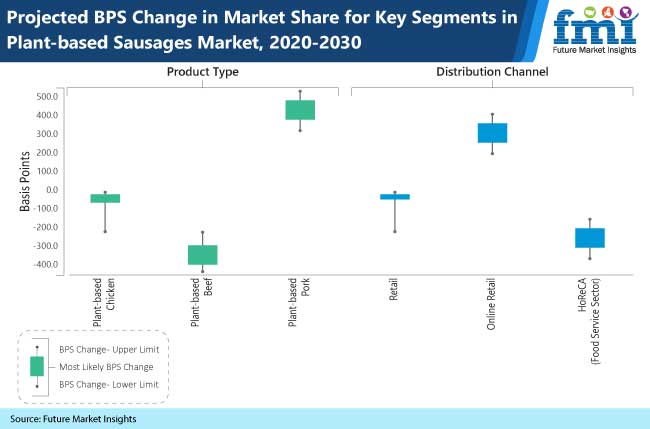 Additionally, there is a high proportion of flexitarian population across key countries. Amongst these, nearly six out of ten intend to become complete vegetarians, while at least one person hopes to adopt a vegan diet.

Various initiatives are being undertaken to promote veganism across Europe, an important catalyst for enhanced plant-based sausages consumption. The Vegan Society, for instance, has launched Teen Hub, a digital platform aiming to empower and inspire teenagers to adopt a vegan lifestyle. It provides tips and information concerning vegan food recipes.

The North America plant-based sausages market is expected to be the 2nd largest, surpassing US$ 500 Mn in the next two years. According to Vegan News, the proportion of American vegan population has increased by nearly 10 million since 2005.

Numerous manufacturers across the United States are leveraging this burgeoning trend to flood the consumer market with a wide range of products. According to PETA, in 2019, major fast food giants such as KFC, Carl’s Jr., Dunkin’ and Subway were offering meat analogue based were offering vegan options.

Consumption is also increasing amid growing shortfalls in meat production. Besides the voluntary shift undertaken by consumers to reduce environmental impacts, meat production has taken a substantial backseat due to the pandemic-induced government shutdowns, prompting meat lovers to opt for alternatives.

India is a highly lucrative market for the sales of plant-based sausages, owing to an already prevailing trend of vegetarianism within the local population. Cultural overtones have been responsible for ushering in this trend since several years.

Notable vegan food producers such as Ahimsa Foods, Good Do, Vegeta Gold and Vezlay have emerged as the top four plant-based food providers across the South Asian giant.

Request a sample specific to the South Asian market.

By product type, plant-based pork sausages are likely to reach US$ 441.8 Mn by 2020-end. Growth is attributed to the high incidence of conventional pork consumption (36%), thereby enabling manufacturers to capitalize on to existing consumer preferences.

Beyond Meat is a prominent player in the plant-based pork sausage domain, manufacturing the Beyond Sausage product line. The product is free of any kind of hormones, nitrites or GMOs, rendering it highly safe for consumption.

By source soy-based protein sausages are expected to remain most preferred, attributed to the multifarious benefits to human health. An ounce of soy protein isolate powder consists of 95 calories, 25% of daily value iron, 1 gram of fat and 2 grams of carbohydrates.

Additionally, soy is a good source of branch chain amino acids, which aid in muscle building, improving exercise performance and enhanced post-workout recovery. This makes it a highly preferred protein choice amongst the millennial population.

Although conventional retail-based hypermarkets enjoy a lucrative share, the popularity of online marketing is overshadowing the former, expanding astronomically at nearly 33% CAGR through 2028.

The COVID-19 pandemic has provided massive impetus to plant-based sausages sales, attributed to massive dietary shifts undertaken by consumers to safeguard themselves from infection. Various manufacturers have gained major ground due to the crisis as they have doled out numerous products to tap into this ever expanding demand.

Since the pandemic’s onset, over 60% of consumers have transitioned towards plant-based food consumption. Nearly two out of five are opting for vegan meat substitutes such as plant-based chicken, plant-based beef and plant-based pork respectively. Naturally, sales figures of prominent manufacturers have registered a massive incline.

Conagra Brands, for instance, has expanded its Gardein meat free portfolio across the US market by introducing its plant-based burger patty manufactured from pea protein. The company has already been manufacturing plant-based sausages since 2019.

On a similar plane, Impossible Foods launched its plant-based faux pork sausage products in Hong Kong in September 2020, representing its first international foray outside of the United States. Such replete product launches are greatly stimulating the plant-based sausages market amidst the pandemic crisis.

Prominent players profiled in FMI’s plant based sausages market include*:

*This is an indicative list- full details about the plant based sausages market players is available upon request.

Some of these players have only recently entered the market, such as Smithfield Plc., which introduced its Pure FarmlandTM plant-based protein portfolio in 2019. The new product line includes breakfast patties, burger patties, meatballs and pre-seasoned protein starters.

Likewise, in October 2020, Beyond Meat unraveled its Beyond Breakfast Sausage® easy-to-cook patties and links containing only 15% fat and 0% cholesterol, a highly preferred product line amongst health conscious consumers.

How will the plant-based sausages market expand until 2028?

The global plant-based sausages market is likely to embark on a prolific growth trajectory, reaching US$ 6.3 Bn by 2028 and expanding at a CAGR of 26.5%. Rising preference for vegan products amid growing health and environment concerns

The global plant-based sausages market growth is underpinned by an increased awareness regarding body health and the subsequent reduction in meat consumption. This limited uptake of meat products has also ushered in a downturn in production, paving way for expansion

Which is the largest market for plant-based sausages?

Europe is expected to emerge as the dominant plant-based sausages market, attributed to the presence of a high proportion of vegan population. North America is expected to trail behind

What is COVID-19’s impact on the said growth projections?

The COVID-19 pandemic has resulted in a global contraction of business activities, attributed to government imposed shutdowns. However, the plant-bases sausages market is experiencing an impressive upswing, with consumers shifting consumption patterns to maintain immunity for fighting the novel coronavirus

Which are the prominent plant-based sausages market players?