Despite the increasing interest in insect protein and cultured meat among consumers, these markets are will need more than a decade to become fully commercialized. Thus, plant-based protein which has low production cost, high market penetration and better innovation has become highly attractive.

Soy, wheat and pea protein make up to 95% of the plant-based proteins in the meat alternatives market. The demand for faba, lentil, chia, and corn is expected to increase at a high rate even though they have a smaller market share compared to the other segments.

Insect protein is gaining traction as meat alternative due to the high protein content. It is more sustainable compared to other animal meats that we consume. The consumption of insect protein has been high in Latin America, Asia, and Africa. According to the study, in the U.S. and Europe, the insect protein market is gaining considerable traction.

Consumers in Europe and North America, are most likely expected to overcome the aversion to insect protein, which could positively impact the market’s expansion. The uses of insect proteins have been expanding in the meat alternatives market as they are incorporated in a variety of products such as bars, cereals, snacks, flour, etc. Bugsolutely Ltd. has introduced a pasta that has 80% wheat flour and 20% cricket flour.

Millennials Have Become the Change Makers in Meat Alternatives Market

Millenials have become more concerned about their health, hence they are in favour of maintaining a healthy eating pattern. The changing consumer preference is reshaping the food and beverages industry, subsequently fuelling the demand for meat alternatives, especially the plant-based ones.

These products are trending among Gen Z and millennial who are more inclined to make healthier food choices. Spurred by this, the demand for clean label products will rise, which in turn will create growth opportunities for the meat alternatives market.

Technological innovations have changed the dynamics of the meat alternatives market as the development of cultured meat, mycoprotein, and impossible burgers could not have been possible otherwise. Meat alternatives that were previously available did not taste or look like meat as the name suggests.

But the research and development carried out in the meat alternatives market have increased the number of product launches and have led to the launch of innovative products. For example, Impossible Foods is producing a bleeding burger by using genetically modified yeast to produce heme, a protein that mimics the flavour of the meat. 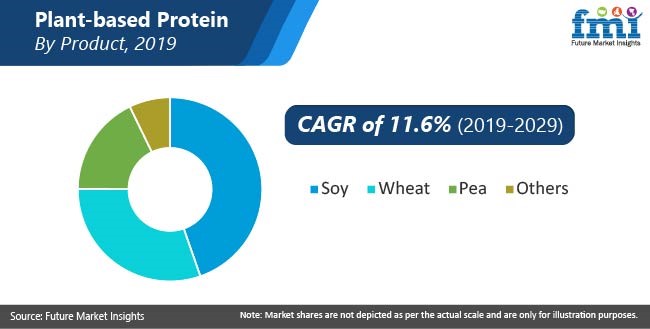 Growing Number of Vegetarian and Flexitarian

As per IFIS Food and Health Information, there is a palpable increase in the popularity of meat alternatives in Europe, especially in the U.K. This increase in the sales of meat alternatives largely depends on the flexitarian trend in the region, as people are not completely turning into vegetarians. Due to the awareness pertaining to the repercussion of meat consumption, the population of Europe is also considering the nutritive meat substitutes.

In recent times, millennials are largely concerned about their health. Therefore, they are inclining towards a healthy eating pattern. Change in consumers’ preference is significantly reshaping the food & beverage industry, and subsequently fueling the demand for meat substitutes. Due to these factors, most of the teenagers are showing interest in plant-based meat alternatives.

Gradual Shift Away from Meat Products

As per the Weforum report, worldwide food systems will need to fulfill the dietary demands of more than 10 billion people. It will be difficult to fulfill the needs of this population, especially when people in North America and Europe have heavy meat requirements. However, recent aversion of consumer towards meat products amid the rise of vegan culture is highly likely to push demand for meat alternatives.

Growing awareness regarding the impact of meat on the environment is leading to changing dietary patterns of consumers. This has led to surge in the demand for meat alternatives. Moreover, governments of various countries are developing Sustainable Development Goals (SDGs) in collaboration with the United Nations, which will gradually influence growth prospects of the meat alternatives market.

The global meat alternatives market is segmented in detail to cover every aspect of the market and present complete market intelligence to readers.