India takes the top rank, with veganism accounting for 27% of the population.

Among the category type items, frozen meat replacements account for the lion's share of the market through 2026. 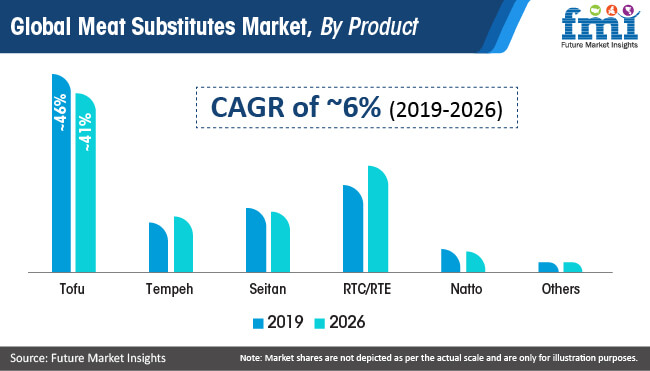 In addition, in March 2018, Forbes found that nearly 70% of the world’s population is cutting down on its meat consumption. Researchers have found that high consumption of red meat leads to colorectal cancer. Such findings have been influential in driving the shift from meat to meat substitutes.

During the pandemic, several fake claims regarding the spread of COVID-19 from animal to person were made, which decreased the demand for meat products. As a result, manufacturers of the meat substitutes were and are able to capitalize on the opportunity to position their products as safe for consumption.

The global meat substitutes market is segmented in detail to cover every aspect of the market and present complete market intelligence to readers.

What is the outlook of the Meat Substitutes Market?

Which are the leading companies in Meat Substitutes Market?

Some of the key competitors are Beyond Meat Inc., Pacific Foods of Oregon, Inc., Monde Nissin Corporation, Kellogg Company