Shisha tobacco is an intoxicant that contains washed or unwashed tobacco as a base ingredient (~83% of the mixture), which is infused with additives such as water, glycerin, and aromatic molasses sugar, and smoked through a water pipe apparatus. As a traditional form of smoking in many countries, shisha tobacco smoking has acquired a variety of regional names, such as narghile, hookah, water pipe, hubble bubble smoking, and bong pipe smoking, amongst others.

There is an immense lack of awareness among consumers about the harmful effects of shisha tobacco smoked through water pipes, because in fact, shisha tobacco smoking is more injurious to health compared to cigarette smoking. This misconception is prevalent amongst people, who both smoke and do not smoke, making it a major factor due to which the shisha tobacco market is witnessing growth across different regions despite the downward spiral of the tobacco industry.

Besides, a wide variety of flavours offered in shisha molasses make these products very indulgent and sensory appealing to consumers. For those addicted to smoking and those willing to give up on smoking (cigarettes, cigars, and other forms of harmful smoking), flavoured shisha tobacco remains a very attractive and innovative product. Increasing social acceptability and shisha culture in cafés and lounges are further expected to drive market growth for shisha tobacco.

The increasing acceptance of shisha tobacco among consumers is leading to the combined interest of companies as far as these products are concerned. Manufacturers of shisha tobacco are offering a variety of flavours and blends, and are working towards updating their inventories with more innovative shisha tobacco flavours to attract a large consumer base. Innovative and attractive packaging of shisha tobacco compared to cigarettes has also led to product differentiation and adoption. 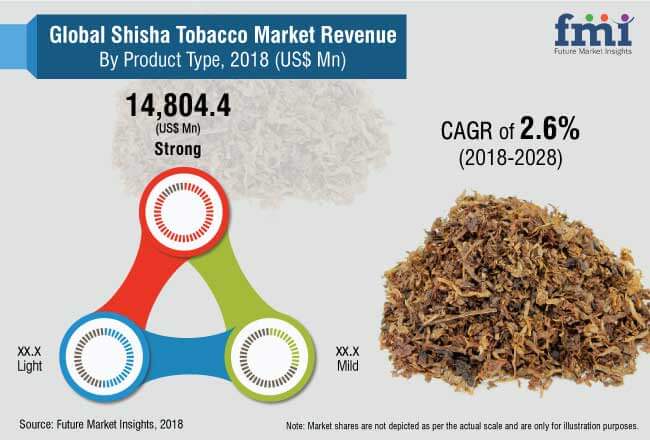 In addition, tourists tend to perceive shisha tobacco from the Middle East as being high in quality, and are ready to pay premium prices for those products. Latin America, followed by Asia Pacific, are anticipated to witness a growing market prospective for shisha tobacco in terms of CAGR, owing to the increasing per capita disposable income of consumers.

Developed economies such as North America and Western Europe are expected to account for a limited growth potential in the shisha tobacco market, due to stringent policies and regulations with regard to tobacco consumption in these regions.

The shisha tobacco market is segmented on the basis of:

Based on flavour, the market for shisha tobacco is divided into fruit, mint, chocolate, caramel, and blended flavours. The fruit flavour of shisha tobacco is further sub-segmented into berry, apple, melon, citrus, and tropical flavours.