In terms of value, the U.S. men’s underwear market is anticipated to register a CAGR of 5.8% during the forecast period and is expected to reach a value of nearly US$ 6,000 Mn by 2026 end. Among all the variety of products available in the market, boxer shorts are anticipated to be the fastest growing segment during the assessment period of 2016-2026.

Also, due to rising levels of obesity, XXXL is projected to be the fastest growing size during the decade. Out of the total U.S. underwear market, the mass merchant distribution channel segment accounts for nearly 70% of the market value and online stores have a share of approximately 10%.

Rising personal hygiene awareness along with increasing disposable income to contribute to the revenue growth of the U.S. men’s underwear market

Increasing awareness regarding health and fitness and personal hygiene among men is influencing them to use two fresh/clean sets of undergarments in a day. Apart from this, increasing disposable income, on-the-go lifestyle, improved living standards and changing preferences of consumers are fuelling the revenue growth of the men’s underwear market in the U.S.

In addition, the spread of modern retail formats such as supermarkets, discount stores and pharmacy stores is resulting in increasing product visibility. Also, availability of a large variety of products related to intimate apparels for men at discounted rates is fuelling the online shopping trends for underwear in the U.S.

The U.S. men’s underwear market is highly competitive owing to presence of a relatively high number of global and local intimate apparel manufacturers. The market is characterised by a high intensity of brand loyalty. It has been noted that consumers in the U.S. prefer established and well-known brands and are generally reluctant to switch to newer brands emerging in the market.

Also, customers face difficulties buying underwear from brick-and-mortar stores due to lack of availability of the product of their choice. These may act as restraints in the growth of the U.S men’s underwear market.

Escalating demand for fashionable and trendy underwear is a factor foreseen to fuel demand for boxer shorts in the U.S. men’s underwear market during the forecast period

Boxer briefs segment is estimated to account for more than 30% in terms of value contribution by the end of 2015, and is expected to register a CAGR of 6.0% during the assessment period. Increasing disposable income coupled with changing lifestyle of consumers are factors anticipated to fuel demand for boxer briefs during the forecast period.

The boxer shorts segment is estimated to account for around 15% market share by the end of 2015, and is anticipated to register a robust CAGR at 7.3% over the decade. Rising number of metrosexual men in the U.S. is increasing consumer spending on fashion products, which is likely to boost demand for boxer shorts in the U.S. 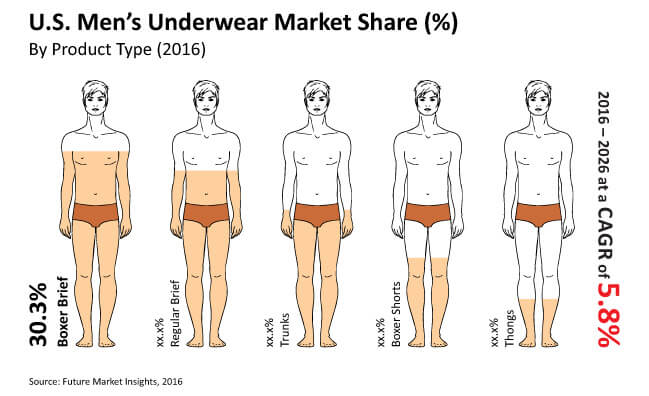