The product life cycle of x-by-wire is in the growth phase and is expected to witness substantial progress in the years ahead. Throttle-by-wire technology has already witnessed widespread adoption in mid and high end cars and in the future it is expected to see an increasing adoption in entry-level cars as well. It accounted for a share of around 71.4% in the global x-by-wire market in 2017.

The deployment of x-by-wire systems in construction equipment and military vehicles is expected to bode well for the market in the long run. The investment of manufacturers in the research and development of advanced technologies and in the testing of bleeding edge technologies such a steer-by-wire is expected to open a plethora of opportunities for the market in the years ahead. 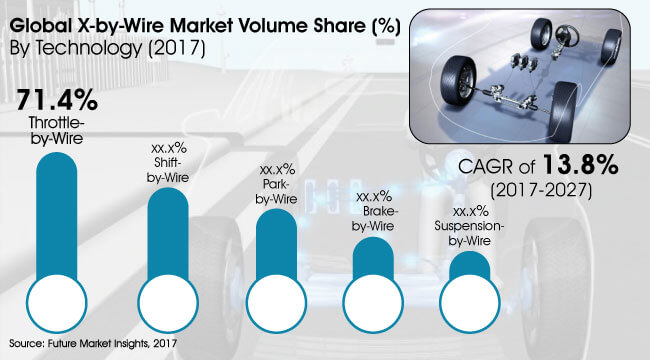 Steer-by-Wire to emerge as a technology of the future

Steer-by-wire is emerging as the technology of the future and has already been implemented by some automakers, such as Nissan and Audi. Nissan became a pioneer in the market to introduce steer-by-wire technology for the first time in its Q50 sedan in the year 2013. However, the company later recalled its vehicles in 2014 and 2016 due to faults in the steering system. Henceforth, some of the market participants have introduced front steer with rear steer-by-wire system that incorporates drive-by-wire system at rear wheels.

One such example is the ‘Quadrasteer’ by Delphi (now Aptive), which has been deployed in some of the vehicles of General Motors (GM). The market for steer-by-wire is expected to with a CAGR of over 32.8% and reach a volume of over 514 ‘000 Units by the end of 2027. The technology has been anticipated to witness widespread commercialization in the next 5-6 years. As of 2016, the total sales of steer-by-wire system was distributed between China, Japan, and the U.S.

At present, steer-by-wire is in nascent stage and is also expensive, thus many companies are reluctant on using it in their vehicles. It has been expected that this technology will emerge as a core technology in the near future and grow over 19 times during the course of the forecasted period. Both automotive and steering manufacturing companies are applying for patents for this particular technology.

It has been acknowledged that over the past one year, a large number of patents have been filed with regards to product enhancement of steer-by-wire technology. However, limited patents were identified for other technologies in relation with x-by-wire market.

Exceeding the growth of all the other technology types, steer-by-wire, though expensive, will be a prominent choice of luxury automobile manufacturers in the long run, thus increasing the run for patents over the forecast period.