Packaging plays a vital role in beer transport and the associated serving and brewing methods. Growlers have emerged as an effective packaging solution to pack large volumes of freshly craft beer. The airtight quality of growlers allows consumers to carry draft beer from one place to another without degradation of quality.

Beer growlers are also used widely to store and serve wines and ciders. As growlers offer an easy means of transportation, Future Market Insights expects sustained sales growlers in the years to come. However, the overall growth outlook will remain sluggish, according to the research findings. The global growlers market that was valued at over US$ 485 million in 2018 will reportedly expand at a mere 2.7% CAGR through 2028.

Consumer inclination towards freshly-crafted beer is increasing continuously due to its freshness and presence of minimum amount of preservatives in it. Also, due to its convenience, the trend of takeaway alcoholic drinks from local pubs and bars is also on a rise. The average price of a growler is on the higher side when compared to its alternatives such as glass bottles or aluminum cans, but growlers can be used multiple times, unlike others.

In recent years, growler manufacturers are focusing on innovative closures that are suitable to maintain the CO2 levels of beer by preventing the entry of oxygen. Growth in the craft beer market is expected to drive the growlers market globally. Freshly-made beer, when stored in clear glass growlers, gets spoiled quickly as compared to other growlers.

This is due to the clear glass that allows exposure to sunlight, which spoils the beer. A ceramic, stainless steel, or a dark glass growler can be used to store beer and keep it fresh for a longer period of time.

Consumers as well as craft brewers continue to face challenges in filling, cleaning, and pouring beverages in growlers. It is noticed that at a mid-sized brewery, more than a keg of beverage product is wasted in a day due to spillage. In addition to this, growlers are not considered to be an ideal way to serve beer as bartenders have to spend a lot of time on cleaning and filling growlers.

Moreover, rising popularity of crowlers over growlers observed recently suggests that crowlers are rapidly taking over conventional growlers owing to their superiority in terms of quality, quantity, and shipping convenience. This, according to the study, will remain a major challenge to growler sales in the near future. 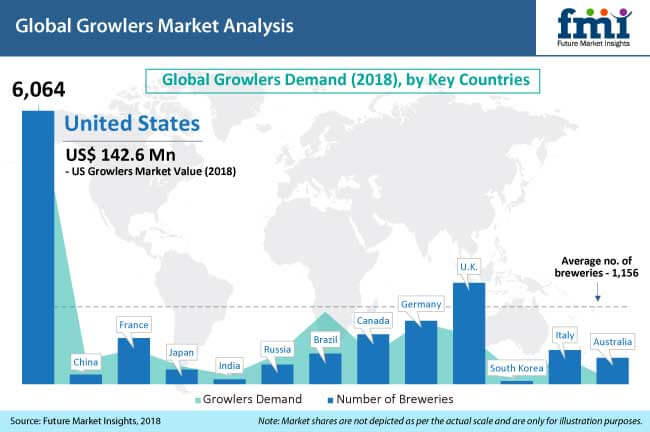 Key manufacturers in the growlers market are expanding through various inorganic and organic methods which are mentioned below: