Grignard reagents are a class of organometallic compounds representing a standard formula R-Mg-X, wherein R is an organic group and X is an atom belonging to the halogen group. Grignard chemicals hold a strong negative charge at the carbon atom and therefore are more attracted towards the positively charged molecules and atoms; this makes Grignard reagents highly reactive and useful for various chemical synthesis and catalytic applications.

The Grignard chemistry has vast applications in the pharmaceutical sector as it is used for the manufacture of several important drugs and medicines that are used to cure severe prolonged diseases including cancer. The sales revenue of Grignard reagents in the NAFTA and Europe regions is estimated to reach US$ 2.8 Bn by the end of 2016 and is expected to increase at a CAGR of 4.2% over the forecast period (2016–2026).

Development of eco-friendly Grignard reagents is leading to their increased consumption across various end-use industries. Growing use of Grignard chemistry in medicines, coupled with the macroeconomic growth of the pharmaceutical industry, is driving adoption of Grignard reagents in the NAFTA and Europe region. Various important medicines such as Tamoxifen used for the treatment of breast cancer and cough syrups, etc. use Grignard chemicals during their synthesis.

However, due to the high reactivity of Grignard reagents, utmost care and safety precautions are required during their manufacturing, use and transportation. Owing to their versatility, manufacturers are highly focussed on developing new products and compounds using Grignard chemistry. Market players in the NAFTA and Europe region are found to have been increasing their market shares actively through various mergers and acquisitions.

On the basis of application, the NAFTA and Europe Grignard Reagents market is segmented into catalyst, stabilisers, and others segment. The catalyst and stabilisers segments collectively accounted for over two-thirds value share in 2015. The others segment is expected to expand at a value CAGR of 3.5% over the forecast period.

On the basis of the end user, the NAFTA and Europe Grignard Reagents market is segmented into pharmaceuticals, agrochemicals, flavour & fragrance, packaging, and research segments. In 2015, the pharmaceutical segment accounted for more than half of the total volume shares and is expected to expand at a CAGR of 3.7% over the forecast period.

Agrochemical and flavour & fragrance segments are estimated to account for a collective value share of 27.8% by the end of 2016. The research segment is expected to expand at a value CAGR of 3.8% over the forecast period. 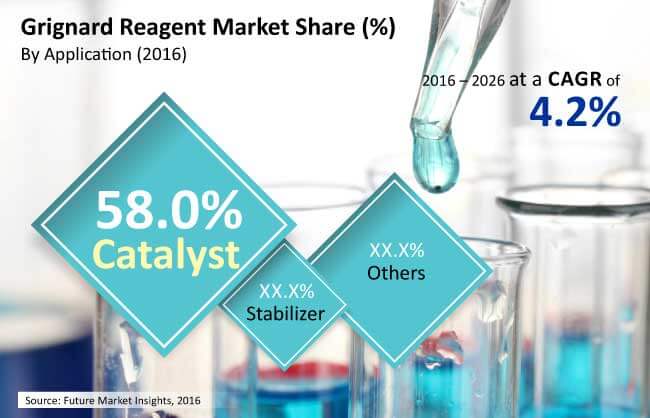 Can the growth of the Grignard Reagents market cross the boundaries of the orthodox markets during the forecast period?