Neonatal Thermoregulation Market: Asia Pacific Projected to be the Most Lucrative Regional Market During the Forecast Period: Global Industry Analysis 2012 - 2016 and Opportunity Assessment 2017 - 2027

An Incisive, In-depth Analysis on the Neonatal Thermoregulation Market

This study offers a comprehensive, 360 degree analysis on the Neonatal Thermoregulation market, bringing to fore insights that can help stakeholders identify the opportunities as well as challenges. It tracks the global Neonatal Thermoregulation market across key regions, and offers in-depth commentary and accurate quantitative insights. The study also includes incisive competitive landscape analysis, and provides key recommendations to market players on winning imperatives and successful strategies.

There have been considerable advancements in developing monitoring systems for neonates. The companies operating in the neonatal monitoring systems market are developing upgraded and improved versions of products, thus ensuring safety and accuracy. This has induced various tire I and tire II manufacturers of neonatal infant care equipment to offer value added products in order to sustain themselves in the changing dynamics of the neonatal infant care equipment market, and this is true especially for the U.S. Companies in the United States are focused on developing integrated neonatal infant care products that are portable. For instance, U.S. based companies such as GE Healthcare and Natus Medical Incorporated provide high-end technologies such as Giraffe OmniBed, which is the combination of an incubator and a radiant warmer that allows carrying out a clinical procedure without any disruption.

A limited number of paediatric outpatient clinics and specialists is a major problem encountered across various countries. For instance, in the United States, there are inadequate number of neonatal nurses and specialists due to the expenses of additional training. This has created a major shortage in the neonatal care industry in the country. This has resulted in major multi-chain hospitals focusing on increasing their footprint by opening paediatric clinics in various locations in the United States to further increase access to neonatal clinics or children hospitals. For instance, in 2013, Stanford Children’s Health established specialty service centres along with California Pacific Medical Centre in San Francisco and seven more areas in the San Francisco Bay area. The number of neonatologists and NICUs has increased in the United States since 2003. The first NICU was established in 1960s and presently there are more than 1,500 NICUs in the United States. According to JAMA Paediatrics, in 2012, there were about 43.2 NICU admissions per 1000 births. The study between the time periods of 2007-2012 concluded that the NICU admission rate increased from 64.0 to 77.9 per 1000 live births.

Strict regulatory approvals in the U.S. are likely to hamper growth of the market

Neonatal incubators are regarded as class II high-risk medical devices by the U.S. FDA. Therefore, such kind of devices are subject to additional controls prior to receiving approval. Imposition of an excise duty of 2.3% on all medical devices is one of the clauses that is likely to restrain the growth of the market. Pre-marketing approval is a lengthy and an expensive process that impacts the growth of neonatal thermoregulation market as it makes the approval process lengthy and launch of new devices takes considerable time. However, such kind of stringent regulatory process is necessary to ensure the safety and efficacy of the medical products. 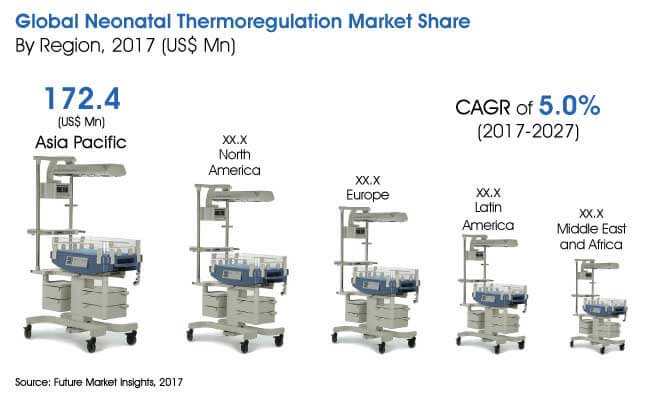 This report tracks the global neonatal thermoregulation market and presents the value forecasts for this market for a period of 10 years. The significant problem in neonates at birth is management of temperature and this contributes to significant morbidity and mortality. Low birth weight is the major cause of hypothermia and hyperthermia due to decreased thermal insulation as a result of lack of subcutaneous fat. Newborns are prone to develop hypothermia. Neonatal thermoregulation devices are used to regulate the body temperature of newborn babies.

Competition landscape section is a treasure trove of market intelligence

Another part of the report features the competition landscape of the global neonatal thermoregulation market and has information on the key players operating in this market. The competition landscape contains detailed information on the important companies operating in the global neonatal thermoregulation market in the form of company description, product overview, key developments, strategic overview and key financials of each of the featured companies along with the SWOT analysis of the companies. This competition landscape is a valuable part of the report as it contains all the necessary information to study the leading companies operating in the global neonatal thermoregulation market in detail and also reveals how they implement their strategies and vision to stay at top in this highly competitive market.

A robust research methodology for accuracy in market numbers

Overall market size has been analysed through historical data, primary responses, and public domain data. Revenue of companies in the global neonatal thermoregulation market has been benchmarked to ascertain the market size for the base year. Macroeconomic indicators such as GDP and industry growth have been considered to forecast the market size over the forecast period. The historical growth trend of end-use industries, market participants’ performance, as well as the present macro-economic outlook has been taken into consideration for estimating the overall market trend forecast. This data is then validated using the triangulation method and is extensively scrutinised using advanced tools to garner quantitative and qualitative insights into the global neonatal thermoregulation market.