Need for neonatal phototherapy in developed and developed nations

The World Health Organization estimated in 2015 that 4/5th of preterm infants developed jaundice. Preterm birth rates can be as high as 7% in developed countries and are even higher in developing ones. Babies with neonatal jaundice are far more likely to develop hyperbilirubinemia that can lead to neurological damage or even premature death.

The National Institute of Health journal estimated that healthcare cost linked to preterm American births in terms of lost efficiency and medical expenditure were more than US$ 26 billion in 2005 itself. APAC and Africa had the unfortunate distinction of accounting for more than 80% of all preterm births in 2005, making infants there vulnerable to neonatal jaundice. Therefore, neonatal phototherapy treatment is the need of the hour.

Rapid technological innovations are predicted to favour companies investing in user-friendly control panel phototherapy devices and blue spectrum radiation sources. Key stakeholders are working on LED radiation sources as they can optimally control radiation intensity and have consume a minimal amount of power.

Companies in the neonatal phototherapy devices market are focusing on devices with a peak wavelength of 460 nm and which can be mounted on an incubator or a warmer to avoid infrared and ultraviolet radiation. The primary drivers of growth in the neonatal phototherapy devices market are the high frequency of neonatal jaundice, rising demand for effective neonatal jaundice treatment and management, and a greater awareness of the existence of such procedures.

An article published in the U.S. National Library of Medicine stated that approx. US$ 18,000 was saved by a little over 60 infants in their homes as opposed to hospitals and there were no reported side-effects. 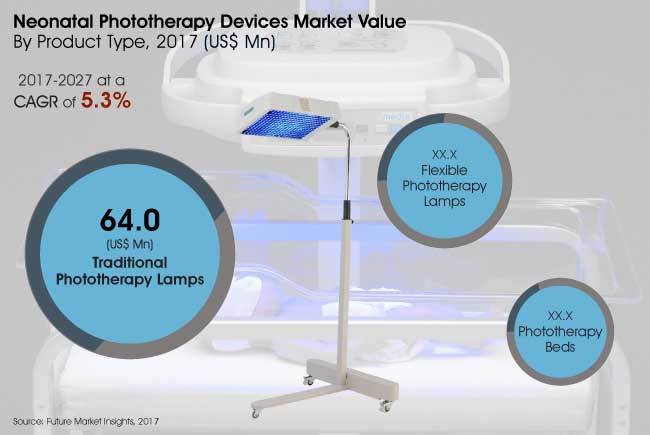 Product differentiation a challenge in the neonatal phototherapy devices market

The main reason for this is the lack of product development in the neonatal phototherapy devices market. There have been several cases where neonatal phototherapy devices have failed and been recalled by the FDA, hampering revenue growth during the forecast period. For e.g. - In December 2016, the NeoBlue Blanket LED Phototherapy System was recalled by the FDA because of device degradation following the melting of its fibre optic cable.

Neonatal phototherapy devices are extremely expensive making affordability a critical issue in emerging economies as hospitals there often have limited funds and cannot afford to maintain such equipment. A Stanford study said that many hospitals in Nigeria and India were unable to source an average of six phototherapy bulbs that cost roughly US$ 15 per bulb as they needed to be replaced every four months.