2021 Preview and Analysis: Oxytocic Pharmaceuticals Market by Route of Administration - Intravenous Infusion and Intramuscular Injection for 2021-2031.

Growth predictions remain positive for Europe due to rapid advancements in maternity care, rising government initiatives and growing number of elective caesareans. Germany will hold highest share in the Europe market, accounting for 31% of oxytocic pharmaceuticals sales in the region.

With competition expected to soar in the coming years, manufactures are focusing on adopting strategies such as new product innovations, agreements and expansions to enhance their product portfolio. 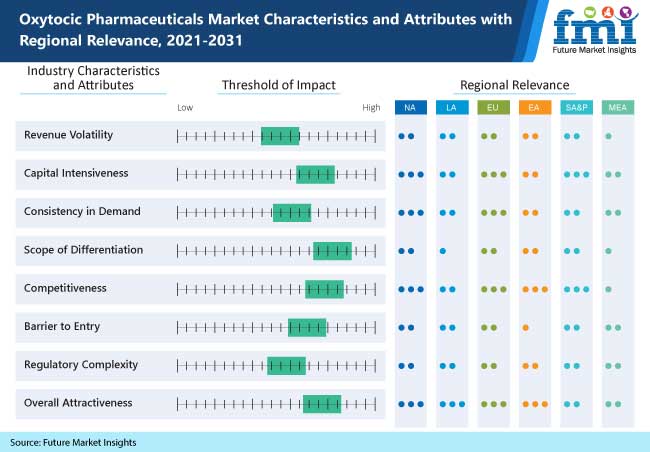 For instance, in 2020, Iconovo announced its new developmental agreement with Monash University for production of inhaled oxytocin ICOone. The agreement allows Monash a complete global right to employ ICOone with oxyyocin to inhibit postpartum haemorrhage in women giving birth. This development aids in enhancing Iconovo’s industrial experience and leverages to use its inhalation experience in the upcoming projects.

Coupled with this, mergers and acquisitions remain a key strategy among market players. For instance, in 2020, Tonix Pharmaceuticals announced a licensing deal with Katana Pharmaceuticals for augmenting the use of its intranasal potentiated oxytocin drug to cure metabolic disorders such as obesity, diabetes and insulin resistance.

Increasing childbirth using labour induction proves to be driving factor for the post-partum haemorrhage condition. There are certain situations – for instance, pre-eclampsia – where continuing the pregnancy is dangerous to the mother, or there are instances where women are uncomfortable, sore and tired. In such cases, labour is induced for convenience rather than medical reasons. However, labour induction increases the chances of post-partum haemorrhage.

According to the World Health Organization, the rate of labour induction in developing countries is lower; but in developed countries, the rates are relatively high, which is creating a positive impact on the post-partum haemorrhage segment. Another factor which is likely to fuel the revenue growth of the post-partum haemorrhage segment is the increasing age of mothers. Older and heavier women and women who are smokers are more likely to bleed heavily after delivery.

The ratio of getting pregnant after a certain age in life has increased in almost all the regions across the globe and this is creating robust development in the global oxytocic pharmaceuticals market, and specifically in the post-partum haemorrhage segment.

Demand in Africa Likely to Increase

The post-partum haemorrhage segment is the most attractive segment by indication in the North America oxytocic pharmaceuticals market, with a market attractiveness index of 3.9 estimated during the forecast period. In the Latin America region, the post-partum haemorrhage segment is estimated to reach a market attractiveness index of 3.7 due to increasing adolescent pregnancies. A majority of these pregnancies occur in Brazil in Latin America.

Companies functioning in the global oxytocic pharmaceuticals market can reap larger market revenue from untapped markets in Asia and Africa where the prevalence of post-partum haemorrhage is on the higher side in comparison with other regions. Imparting awareness pertaining to pregnancy among the women in these regions can help create more market opportunities for existing as well as new entrants in the global oxytocic pharmaceuticals market.

The Report Segments the Market into Five Sections:

By Route of administration

By Source of Origin