It has been projected that North America will lead the global pharmaceuticals grade sodium bicarbonate market owing to the high use of API in the region. The use of excipients and antacids is also expected to bode well for the growth of the market in the region. The high use of antacids in the region will trigger the demand for pharmaceuticals grade sodium bicarbonate over the forecast period. The growing consumption of the aforesaid medicines can be attributed to the changing and hectic lifestyle of the people and the growing culture of fast food in the region. Antacids are used to relieve acid ingestion, treat an upset or sour stomach and heart burn.

Antacids are taken via mouth and it works by neutralising the excess of stomach acid. Antacids contain various ingredients such as aluminium hydroxide, calcium carbonate, magnesium hydroxide and sodium bicarbonate alone or in various combinations. Antacids may also contain other ingredients. Antacids differ from the other medicines in how quickly they work and for how long they provide relief. Those that rapidly dissolve in the stomach, such as magnesium hydroxide & sodium bicarbonate bring fast relief.

On the other hand, an active pharmaceutical ingredient is any substance or a combination of substances used in a finished pharmaceutical product. These ingredients have a direct effect on the diagnosis, treatment and prevention of an ailment and modify the physiological function in human beings. 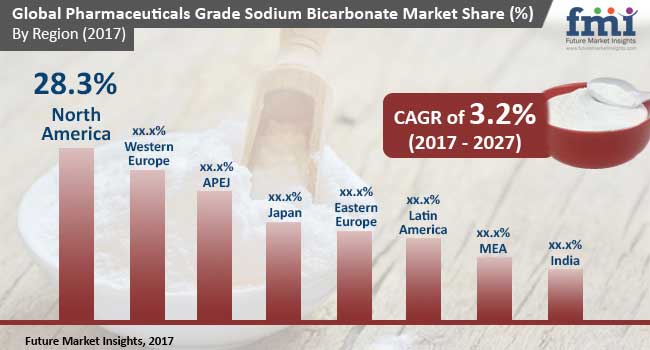 By the end of 2050, Asia will be the leading region in terms of the percentage of geriatric population in the world. Aging population continues to contribute to the shift in healthcare requirements and responses. The propensity of usual gastronomical diseases due to either the absence of stomach acid or less production of the same increases among people with old age and requires an efficient digestive system.