An Incisive, In-depth Analysis on the Sourdough Market

This study offers a comprehensive, 360 degree analysis on the Sourdough market, bringing to fore insights that can help stakeholders identify the opportunities as well as challenges. It tracks the global Sourdough market across key regions, and offers in-depth commentary and accurate quantitative insights. The study also includes incisive competitive landscape analysis, and provides key recommendations to market players on winning imperatives and successful strategies.

Increased urbanisation and growing demand for fast food products such as pizza and others foods are factors driving the growth of the sourdough market in Western Europe. Sourdough pizza base freezes better than regular pizza base and also enhances the taste factor. As a result, sourdough pizza base is more preferred by manufacturers of frozen pizza. Growing demand for low GI bread and bakery products in Western Europe is fuelling the demand in the sourdough market in the region. Bread with a high GI score contains chemical constituents that can rapidly increase blood glucose levels. Insulin and glucose peaks result in obesity, Type-2 diabetes and various heart related conditions. In sharp contrast, low GI foods contain slow digestible carbohydrates, which produce a gradual, relatively low rise in blood glucose and insulin levels. Thus, consumer demand for low GI bakery products in Western Europe is higher and manufacturers are catering to this demand by developing and launching low GI sourdough based bakery products.

Increasing consumer demand for gluten-free bakery products in Western Europe is creating robust development in the Western Europe sourdough market. Gluten sensitivity is any intolerance to gluten, which is a constituent of grains such as wheat and barley. Celiac disease is an extreme form of gluten intolerance and affects a relatively small volume of the global population. However, with the population growing rapidly, the number of persons affected is expected to increase significantly in the future. Sourdough is becoming increasingly popular in the bakery industry in the Western Europe region due to its versatility and ability to enhance flavour and texture and strengthen shelf life of end products. Sourdough can be incorporated into a variety of baked products and can be used in various forms, including dried powders, starter cultures and live liquid cultures. 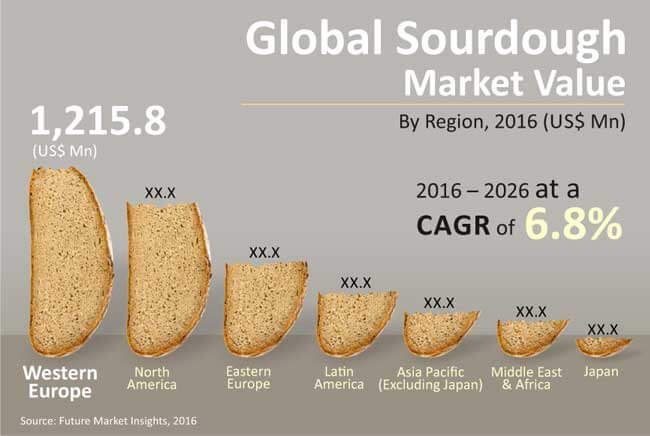 While drafting a new report on the global sourdough market, Future Market Insights analysts have observed that leading market players are focussing on two key strategies namely acquisitions and new product development. The report titled “Sourdough Market: Global Industry Analysis and Opportunity Assessment 2016-2026” presents a comprehensive forecast of the global sourdough market for a 10 year period 2016 – 2026. Our analysts have further observed that several manufacturers are entering markets in newer regions through an acquisition of major regional firms. Most acquisitions are focussed on expanding brand presence in emerging regions such as South Africa and Brazil. Companies are also focussing on producing organic and gluten free products with particular emphasis on supplies to craft and in-store bakeries. We have observed that the bread segment accounts for a significant share of the global sourdough market revenue, which is likely to register a high growth rate as sourdough can be used to prepare a wide variety of breads. Our analysts have also noticed that increasing consumer demand for healthy and tasty foods is fuelling revenue contribution of the waffles and pancakes segment.

Macroeconomic indicators such as food industry outlook, food and health supplement spending and others have been considered to arrive at the indicated market numbers in this report. Yearly change in inflation rate has not been considered while forecasting market numbers. Top-down approach has been used to assess market numbers for each segment, while bottom-up approach has been used to counter-validate the reached market numbers. While inspecting the global sourdough market we have collected data by collating inputs from government databases, trade value and volume data from regional manufacturers and secondary and primary sources and by using the benchmarking method. While validating the data our analysts have excluded regional average profitability margins from estimated data collected from distributors. We have also estimated approximate annual consumption of end-use sectors in target geographies. Besides, historical demand trends, dairy ingredients industry growth rate, the financial performance of top companies, raw material production trends and influence of increasing disposable income are included in this report.

Market volume is inferred through in-depth secondary research and validated from industry experts through primary interviews. Each interview is thoroughly analysed and average market volume is deduced and reconfirmed prior to incorporating in the report. The price of sourdough is deduced on the basis of type where the average price of each sourdough type is inferred across all the seven assessed regions. The market value of the global sourdough market is thus calculated from the data inferred from the average selling price and market volume. For the 10 year forecast of the global sourdough market, various macroeconomic factors and changing trends have been observed, giving an idea about the future of the market. Other important factors considered to arrive at market forecast include the size of the current market, inputs from the demand side and supply side and other dynamics shaping the global sourdough market.