Supercapacitors (also known as ultracapacitors), a type of capacitor, are energy storing components which have advanced features in comparison to conventional capacitors (electrolytic and ceramic capacitors), such as high energy density, faster charging and discharging, high power density, etc.

A supercapacitor is made of electrodes, covered with a layer of activated carbon for increasing its surface area, and an electrolyte which acts as the separator or the dielectric, when compared to a conventional supercapacitors. Technological advancements have led to the introduction of two more types of supercapacitors, i.e. pseudo-capacitors and hybrid capacitors.

Since their inception, due to the mixed features of a Li-ion battery and a supercapacitors, a high demand for hybrid capacitors is being witnessed in the market. Supercapacitors have applications across various industry verticals, especially in electronics, automotive and transportation, and energy and power. In addition to this, continuous research and development is under process for further enhancing the features of the product.

Owing to this, graphene-based supercapacitors are also launched in the market, which possess higher charge holding capacity when compared to hybrid capacitors. The market has witnessed considerable traction in the past, and is further expected to witness a boom during the forecast period.

Revenue generated by global supercapacitors market is estimated to exhibit a double digit CAGR and hence, reach US$ 5.5 Bn by 2028. On the basis of type, electrical double layer capacitors (EDLC) segment is estimated to hold the largest share in 2028. 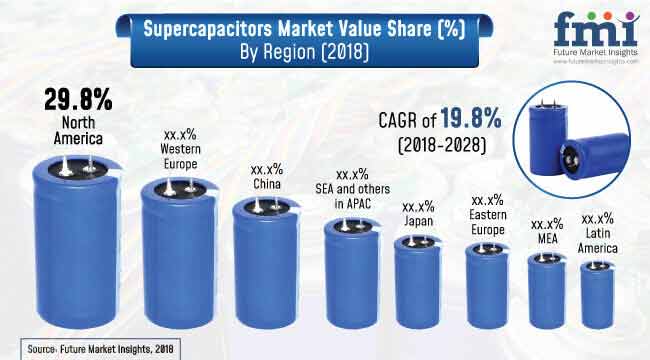 Supercapacitors market in China is expected to witness the highest growth in the global market owing to the increasing adoption of supercapacitors in automotive and transportation, and consumer electronics industry, complimented by the expansion of both the industries, in the region.

In January 2017, Maxwell Technologies signed an agreement with CRRC-SRI for localizing its ultracapacitor manufacturing in China, for the energy bus market. This partnership enabled the company to compete more effectively in the Chinese bus market.

In April 2017, KEMET Corporation acquired NEC TOKIN Corporation, to add two additional manufacturing sites in Thailand and Japan, and a production center in Japan. In addition to this, the company added an additional product in its product portfolio, i.e. electric double layer capacitors (supercapacitors).

In April 2018, CAP-XX launched thin 3V supercapacitors for enhancing the data collection and transmission process, and for replacing the batteries facing issues in delivering the power required for the same.