Stent is referred to as a device that is inserted into internal duct or a blood vessel to inflate the vessel and avoid blockage. Typically, medical stents are manufactured using metal mesh. They remain permanently in the human body or are even removed in case of any further surgical intervention.

Bioabsorbable stents are biodegradable stents which carry out same functions, the only difference being that these stents are manufactured from material which has dissolving properties, or are easily absorbed in the body.

The global bioabsorbable stent market is impacted by several factors such as rise in the number of cardiovascular surgeries across the globe, growing risk of cardiovascular disorders among people suffering from obesity, low cost of treatment, along with exact placement of stent and improvement in technology in the medical field in a positive way. However, there are certain aspects which limit or challenge the growth of the global bioabsorbable stent market. Low awareness about the bioabsorbable stents and complications associated with these stents pose hindrances in the growth of the global market.

Bioabsorbable stents are medical devices which are fabricated using material which are easily absorbed within the body and perform the function of a stent of preventing blockades. These stents were invented as several problems were associated with metal stents. Bioabsorbable stents would assist in avoiding the loss of normal vasomotion, permit vessel remodelling and persistently improve the endothelial function.

According to Future Market Insights research report on the global bioabsorbable stents market, the market is anticipated to reach a value of more than US$ 350 Mn by the end of 2022 and is poised to grow at a robust CAGR of 9.7% during the forecast period of 2017-2022. 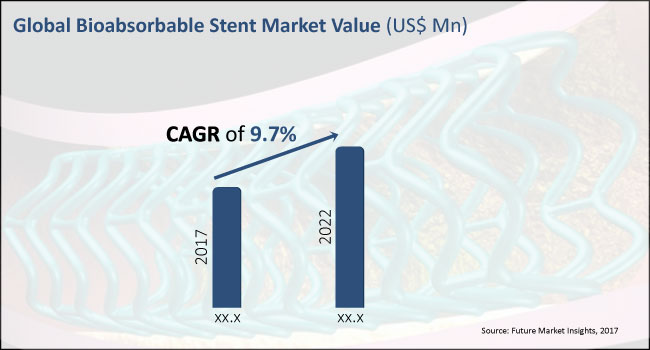 According to Future Market Insights, Europe will continue to remain lucrative for bioabsorbable stents. According to current market dynamics and forecasted future scenario, this trend is anticipated to continue throughout the period of forecast of 2017 to 2022, thereby Europe region retaining its dominance in the global bioabsorbable stents market. Europe region is anticipated to reflect a significant growth rate to register a CAGR of 9.6% during the forecast period.

North America region is anticipated to show highest growth rate throughout the forecast period 2017-2022, followed by Asia Pacific excluding Japan (APEJ) region. Bioabsorbable stents consumption has dramatically increased in these regions making them a good option for players to invest in. North America region is expected to grow at the highest CAGR of 10.2% during the forecast period. This growth can be attributed towards fast growth in medical technology, higher disposable income and better medical facilities.

Following hospitals segment, the cardiac catheterization labs is a second largest segment, reflect a market share of about 24.7% (as of 2017). This trend is likely to continue for these segments throughout the forecast period.

The coronary artery disease segment by disease indication is expected to grow at a robust growth rate and also is expected to dominate the market. The segment showed a promising growth and a high market share of 67.5% in 2017 and is more likely to remain dominating throughout the period of forecast.

Note: The insights mentioned here are of the respective analysts, and do not reflect the position of Future Market Insights