Increasing prevalence of coronary artery disease is fuelling the demand for interventional cardiology treatment. Patients suffering from long-term CAD are opting for angioplasty as first line of treatment.

According to National Centre for Health Statistics, every year 1 in 4 deaths in the U.S. are caused due to coronary artery diseases (CAD) and approximately 785,000 people in the U.S. suffer from their first heart attack and 470,000 suffer from myocardial infraction. This due to changing lifestyle habits, smoking, pollution and other factors. This increasing prevalence of coronary artery diseases and higher healthcare expenditure in lower middle income countries is projected to boost growth of the global coronary stents market over the forecast period.

Also, obesity is one of the major risk factors responsible for various cardiovascular diseases worldwide. Excessive weight or obesity causes abnormal or excessive accumulation of fats inside the artery lumen that causes several health problems such as coronary heart diseases. Hence, weight loss and obesity management is an integral parameter to avoid any kind of cardiovascular disease.

According to WHO estimates, each year, 2.8 million deaths across the globe are due to diseases caused by obesity. Thus, increasing ageing and obese population are major factors expected to fuel growth of the global coronary stents market over the forecast period. 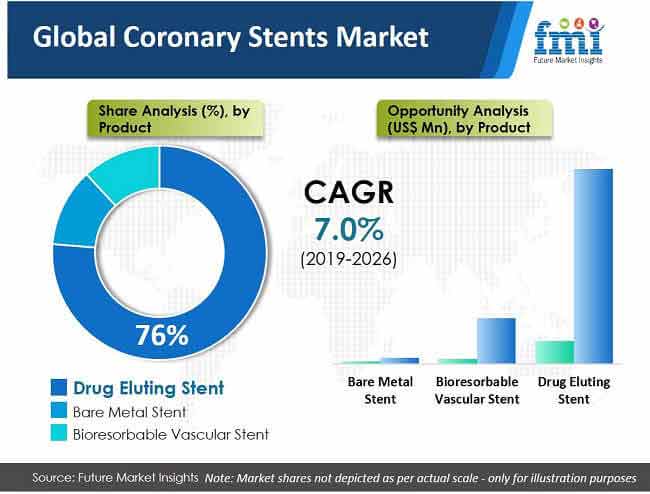 Added advantages of stenting procedures include substantial improvement of blood flow and prevention of further damage to the heart muscle. It also helps in improving the symptoms of heart disease, such as angina and shortness of breath thereby, reducing need for coronary bypass surgery. Thus, surgeons prefer stenting, as it is a minimally invasive procedure and post-operative recovery is relatively fast.

Patients suffering from coronary artery blockage are prescribed coronary stenting. Angioplasty is the first line of treatment for patients suffering from acute coronary artery blockages. Number of patients undergoing stenting has been increasing steadily over the last decade. This is due to emergence of outpatient coronary stenting procedure, which reduces long hospital stays. Further, usage of bioabsorbable coronary scaffolds in coronary blockage has proven more benificial over drug eluting stents.

Therefore, increasing number of cardiologists referring stenting procedures for patients suffering from CAD is a major factor expected to fuel revenue growth of coronary stents market in the near future.

How the market is expected to grow in forecast period?

The market is expected to grow at a moderately high CAGR of 7% during the forecast period.

Which product is expected to impacting growth of the market?

APEJ is expected to lead the growth of the coronary stent market owing to the large patient pool in the region.

Which companies dominating the market?

Companies like Boston Scientific Inc., Medtronic, Terumo Corporation are the one that dominate the market.