Gamma Knife and Cyber Knife are the two widely used stereotactic radiation therapy procedures. Global Gamma Knife equipment revenues were estimated at US$ 172 million in 2015, and the market is expected to increase at a compound annual growth rate (CAGR) of 9.1% through 2025. The key factors expected to drive adoption of Gamma Knife include,

(Detailed analysis of key drivers available in the report)

Although Gamma Knife has proven to be a highly effective treatment option, high cost, low equipment availability, and lack of awareness in developing markets can inhibit adoption. The cost of a Gamma Knife is in the range of US$ 4 Mn to US$ 5 Mn, with additional setup costs of US$ 1 Mn to US$ 2 Mn. Total investment in procuring a machine can add up to US$ 7 Mn. The high cost of Gamma Knife has remained a longstanding challenge, however, it is expected that technological advancement will lead to cost reduction in the future.

While brain metastasis will continue to be the leading disease indication for Gamma Knife, the others segment (pituitary tumour, epilepsy, acoustic neuroma, and Parkinson’s) is projected to increase at the highest CAGR during the forecast period.

On the back of strong adoption in the U.S. healthcare sector, North America has remained the largest market for Gamma Knife. However, during the forecast period 2015-2025, Asia Pacific will emerge as the most lucrative market, driven by robust adoption of Gamma Knife in China, India, Japan, and South Korea. North America’s revenue share will decrease to 25% in 2025, 4% lower than the current revenue share. The Gamma Knife market in Europe will continue to remain steady, with hospitals and clinics in EU5 countries accounting for the bulk of demand. Gamma Knife market in Middle East & Africa (MEA) and Latin America will grow at high CAGR owing to the small base of market in these regions. 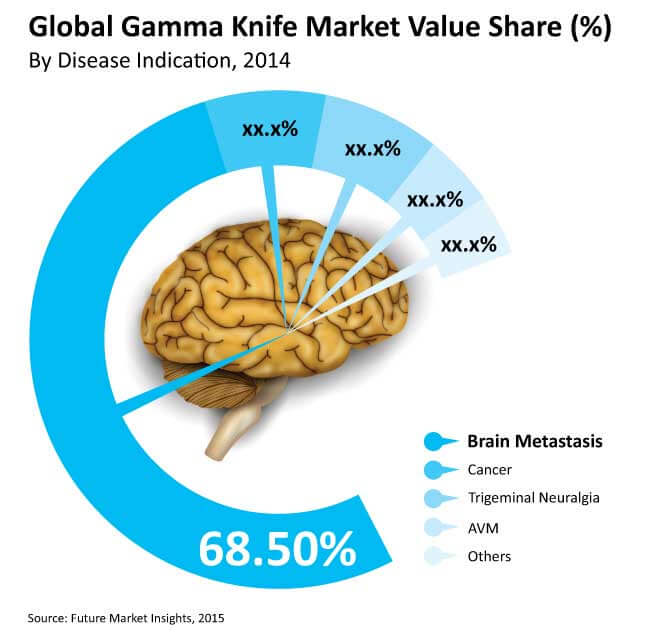