The stevia market is anticipated to advance at a moderate growth during the forecast period 2019-2029. According to studies, stevia is about 200 times sweeter as compared to sugar. Moreover, it is a zero-calorie sweetener and does not have any harmful effects on the human body. As a result, a shift is witnessed among consumers, away from the artificial sweeteners to the natural sweeteners, which boasts a high potential to improve the size of the stevia market during the forecast period.

Growing demand for nutrition-rich products among consumers to lead a healthy lifestyle is expected to bring in favourable growth instances for the stevia market during the forecast period. This is on the back of the contents such as antioxidant compounds, caffeic acid, quercetin, flavonoids, and tannins.

Numerous health benefits that stevia provides have attracted the attention of manufacturers for the utilization of the product in yogurt, tea, and coffee. As the millennial populace is opting for low-calorie food and drinks, the demand for stevia is likely to be increased.

Besides being used in the preparation of go-to-drinks, stevia is ground and sprinkled on the cooked vegetables, salads, cereals, and meat to add a specific flavour to it. There are numerous ways in which stevia can be used. As a result, manufacturers operating in the stevia market are experimenting and discovering new ways to reduce the calorific content of the product without compromising on its taste.

During the COVID-19 crisis, the demand for stevia remained moderate, on account of the disruption in the distribution network. Stevia still lacks the desired popularity as compared to artificial sweeteners. As a result, it has low demand in the supermarkets, while online sales of the product are high. Post the COVID-19 effect, the stevia market could witness an additional uptick in its growth, as consumers are switching to healthy and natural options.

The rising prevalence of diabetes and obesity is anticipated to serve as a major driver for the stevia market. According to the World Health Organization, in 2016, around 1.6 million deaths were caused directly due to diabetes, and it is the seventh leading cause of death across the world. Also, in 2016, more than 1.9 million adults were overweight, while 650 million of these adults were obese.

As the occurrence of diabetes and obesity is increasing, consumers are taking appropriate measures to maintain a healthy lifestyle, and thus, are looking for zero-calorie natural sweeteners to maintain their blood sugar levels. In consequence, the demand for stevia is estimated to increase, as it is aligned with the requirements of the consumers.

As the consumers are opting for plant-based and natural products, manufacturers, especially in the F&B industry, are trying to incorporate natural ingredients in their products. The increase in awareness about the side-effects of the hormones and antibiotics present in animal products, rising vegan population, and increasing concern for animals are anticipated to be some of the drivers for the increase in the demand for plant-based products.

Thus, the increasing inclination towards the use of plant based products is estimated to have a positive influence on the stevia market. . Stevia is a natural, high-intensity sweetener, which is 200-300 times sweeter than sucrose. It is natural and helps to develop low-calorie products. Stevia contains active compounds such as steviol glycosides, which are heat- and pH-stable.

Various advantages offered by stevia have increased its demand in the end-use industry and are anticipated to boost the growth of the stevia market.

Potential benefits of stevia are still not known among consumers across some regions of the world. As the knowledge about stevia is less, consumers are anticipated to prefer the use of products that contain known ingredients. The less popularity of stevia in the market is anticipated to affect its sales in end-use industries. Therefore, the success of stevia manufacturers is likely to hinge on their capabilities to increase awareness among the consumers through effective promotional and marketing strategies. 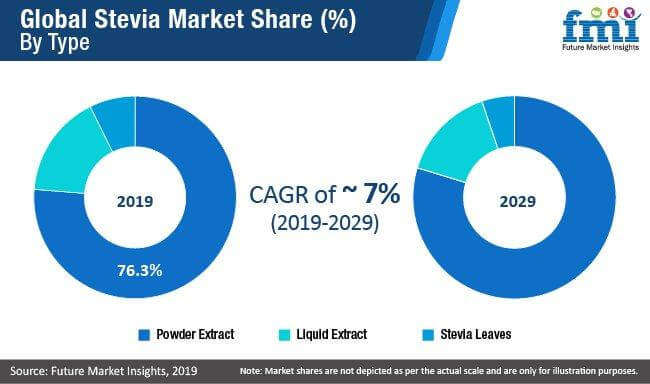