The Individual Quick Freezing (IQF) technology involves vegetables being frozen as individual pieces, which is unlike other freezing processes. Due to this, increased convenience is offered to consumers and thus value of the product gets enhanced. The IQF process of freezing vegetables is far superior to the conventional process. The USP of this technique is that small ice crystals form within the product that help maintain the fresh quality of the product even after the shelf life of the same is extended. Most foods can be preserved for a longer period of time if they employ the IQF process and are kept at a low temperature till they are used.

In the conventional way of slow, natural freezing, the food gets destroyed due to the low temperature drawing all the water from the small cells of the food, adversely affecting its colour and flavour. In contrast, in IQF method of freezing, the breakage of the cell walls of the food items is prevented as the freezing process is quick. Hence, due to the use of IQF method of freezing, most of the flavour, colour and the firmness of vegetables or fruits is retained.

Bacterial contamination in frozen fruits and vegetables is the main issue that is being faced by Japan and North American countries. Listeria monocytogenes bacteria has generated a lot of adverse publicity for frozen foods and IQF vegetables have been recalled from the market for the same reason. Due to the high pollution levels in countries such as U.S. and China, that are two of the three major producers of IQF vegetables, manufacturers are facing the problem of bacterial contamination of IQF frozen food.

This is especially true for countries like India and China, and this strategy can help reduce the price of the finished IQF vegetables and thereby increase the market size of IQF vegetables. To underscore this point, companies like Capricorn Food Products India Ltd. is trying to increase their output of IQF vegetables from their facilities located in India.

IQF peas segment is anticipated to register the highest CAGR during the forecast period. Increasing demand for convenience food coupled with an increasing vegan population is set to boost the demand for IQF peas in the North America and Western Europe regions. The IQF Potato segment accounted for a value share of more than 20% in the year 2016. 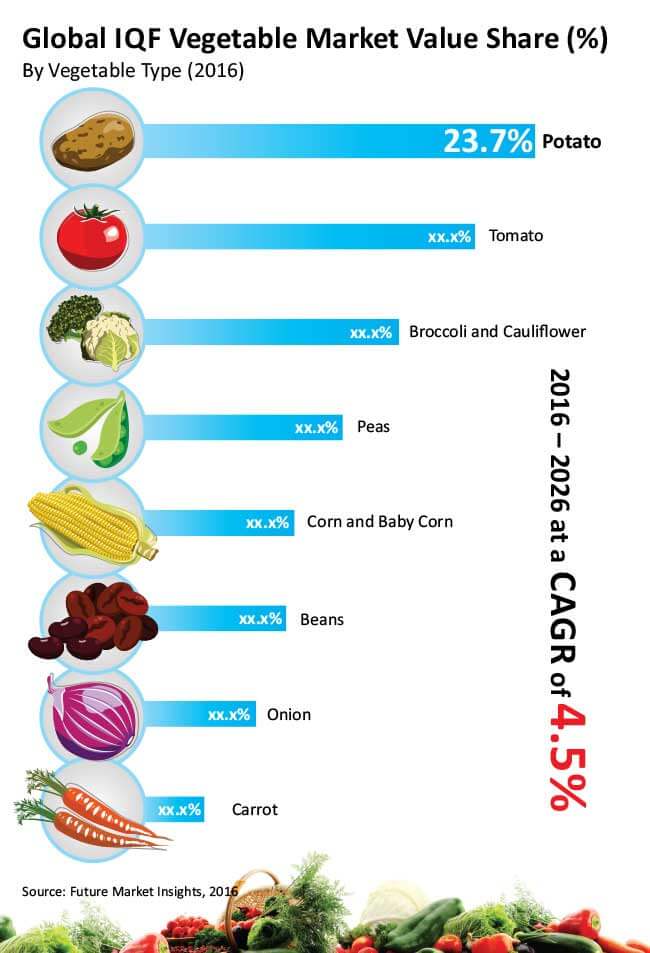 These two companies have launched various pilot projects in a number of countries such as U.S., Canada, U.K. and France and have completed the successful transition from frozen to IQF without compromising on taste and quality of their products.”