Kegs Market Analysis: Over 59.3% of the revenue to be generated by the Stainless Steel Keg in 2018

Global economic performance has stabilized over the last three quarters in the prominent countries. This is clearly reflected through the IIP and PMI of the manufacturing hub economies. Increasing number of individuals that are consuming alcoholic and non-alcoholic beverages across the globe due to the changing consumption patterns, lifestyle and overall improved living and expenditure standards have resulted in growing demand of storage formats such as Kegs across the globe. Furthermore, huge demand of cooking oil in in the emerging economies is rapidly being fulfilled with the help of kegs ultimately acting as a growth propagator in the global kegs market.

Kegs manufacturers have witnessed increasing demand from countries such as India, China, Indonesia, and Brazil where alcohol consumption has been increased tremendously in the last two decades. This has led to an increase in the demand of the kegs from emerging nations creating long term sustainable demand for the kegs. As the raw material used for the process of manufacturing of kegs have steadily increased over the last couple of years, kegs manufacturers are facing the challenge of declining profitability margins coupled with low alternatives available in the market.

Across the globe, kegs manufactures are increasingly facing the challenge of keg loss due to the non-return, damage or improper handling of kegs. In order to mitigate the aforementioned challenges manufacturers are charging a specific deposit amount as an insurance to provide the product on rent. However, the customers of the kegs realized that they can get double, triple or quadruple the cost of their deposit by selling the empty kegs to the local scrap dealers and they can earn more profit by selling the kegs. As per recent estimates on an average, keg loss costs brewer between $0.46 and $1.37 per barrel on annual keg production. The loss varies depending upon the size of the brewery 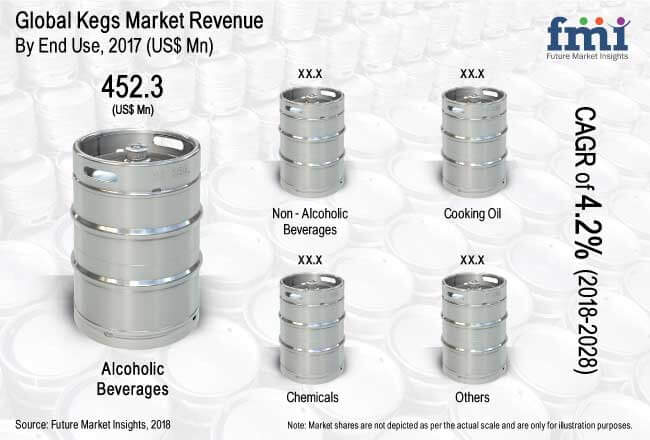