Over the past couple of decades the world has witnessed a paradigm shift in consumer preferences, especially in case of diet. An increasing number of consumers is switching to vegan products to reap the critical health benefits they offer. Similarly, the demand for plant-based products is constantly on the rise, in North American and Asian regions.

The Chinese government has recently started to encourage reduction in meat consumption, which has resulted in rapid growth of the country’s vegan market - over 17% between 2011 and 2016. On the other hand, North America has witnessed increased number of vegan product launches. An expanding vegan population, predominantly in Asia and North America is expected to drive the growth of Macadamia market.

Market Taxonomy Based on Nature, Type, Form, End Use, and Region 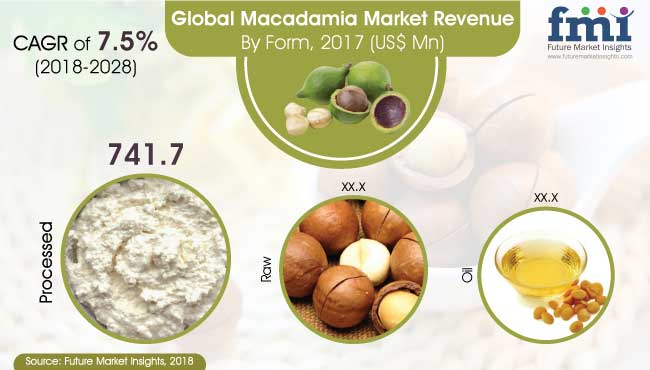 By nature, the global macadamia market is segmented into organic and conventional among which, the latter is estimated to account for over 88% of the market value by this year end. The product type segment is further sub-segmented into in-shell and kernel. By form, the global market for macadamia is segmented into raw, processed, and oil. Among all these, the processed segment is estimated to account for over 36% of market share in terms of value of the overall global Macadamia market, in 2018.

On the basis of end use, the macadamia market is classified as residential, commercial, and industrial. The industrial segment is further bifurcated into food industry, and cosmetic & personal care. On the basis of regional analysis of the global macadamia market, Asia-Pacific excluding Japan is anticipated to dominate, accounting for a significant market share in revenue terms by 2028 end.

Macadamia Consumption to Register Healthy Rate in Next Decade

In terms of value, the global macadamia market is anticipated to expand at a CAGR of 7.5% during the forecast period. By the end of 2028, the market is likely to reach a value of around US$ 4,500 Mn, as predicted by a recently published report by Future Market Insights. Macadamia consumption will possibly register a higher growth rate within Asia Pacific, which has been the top consumer market for macadamia over the years. Estimated at a higher CAGR value over 2018-2028, APAC is expected to remain the largest market through 2028, followed by Middle East & Africa and North America. APAC accounted for over 27% value share in 2017, which is rise up to 29% by the end of 2028.

The market has been segmented as below:

Global Macadamia market – By End Use