A glutelin type found in seeds of rice, Oryzenin, is a much better alternative as it does not lead to any kind of disorders such as celiac disease. The global oryzenin market is influenced by several aspects which revolve around the benefits and uses of oryzenin. The rising incidences of celiac diseases has triggered the use of oryzenin in several regions. There is a direct correlation between the growth of the global oryzenin market and prevalence of gastrointestinal diseases and irritable bowel syndrome.

Oryzenin does not cause any of these problems, unlike wheat or barley or rye, and hence it pushes the adoption of oryzenin. Moreover, the rising demand for rice proteins owing to functional properties has contributed towards the growth of the global oryzenin market.

Other important growth influencers which drive the global oryzenin market are low cost of production of rice proteins, high gelling properties and high protein content makes oryzenin to be used extensively in food and beverage industry, increasing health awareness, rising consumption of oryzenin in sports nutrition and its use as an enhancer of nutritional value in several food products. North America regions is a highly lucrative region for the growth of the global oryzenin market.

Oryzenin is a type of glutelin/protein which is typically found in seeds of rice. Consumers who are looking for alternatives to non-allergen, lactose free as well as gluten free source of proteins, can look forward to oryzenin as a better alternative. Oryzenin does not cause any kind of disorders with respect to digestion. 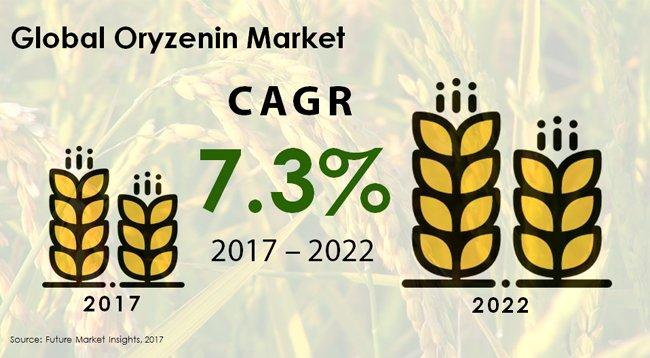 According to Future Market Insights’s research report on the global oryzenin market, the global market is expected to reach a value of about US$ 112 Mn by the end of 2022, growing at a robust CAGR throughout the period of assessment, 2017-2022.

Global oryzenin market finds North America to be the most lucrative region which reflects higher market attractiveness. The region is poised to grow at the highest rate showing a robust CAGR of 9.0% throughout the period of assessment. The regions dominated the global market in 2017 with respect to market share and is poised to continue dominating the global market due to high growth rate during the assessment period.

Isolates segment by product type have dominated the global market with a high market share in 2017 and are poised to continue this trend in the coming years. This segment also poised to grow at a robust growth rate to register a CAGR of 8.3% during the assessment period 2017-2022. The concentrates segment also shows high growth potential and is expected to grow at a very high CAGR throughout the period of assessment. The isolates segment is expected to gain the highest BPS by the end of 2022.

Gelling segment by function is poised to grow at a highest growth rate throughout the period of assessment. The segment is anticipated to register a robust CAGR of 7.8% throughout the assessment period. The emulsifying segment dominates the global market in terms of revenue share and also expected to gain a high BPS by the end of 2022.

Sports and energy Nutrition Expected to Lead the Global Market

The sports and energy nutrition segment by application is expected to dominate the global market in terms of revenue share. Based on statistical analyses in 2017, this segment lead the global market by reflecting higher market share and this trend is poised to grow in the coming years as it also reflects robust growth rate.

Bakery and confectionary segment by application shows the highest growth rate followed by sports and nutrition segment during the assessment period 2017-2022. This segment also expected to gain high BPS by the end of 2022, and it is posed to hold significant market share in the coming years.

The dry segment by form shows high potential with respect to growth rate as it is poised to register a CAGR of 8.8% throughout the assessment period 2017-2022. Also, it is expected to gain the highest BPS by the end of 2022. The liquid segment, however, has shown high market share, almost three times more than that of dry segment in 2017 and this trend is expected to continue in the coming years.