The dietary supplement market recorded an impressive growth between 2016 and 2020, owing to the rising prevalence of lifestyle diseases such as obesity, diabetes, high blood pressure and other cardiovascular disease. FMI in latest edition of the study forecast demand for dietary supplements to rise at nearly 9% CAGR between 2021 and 2031.

Increasing awareness about the significance of proper diet and fitness in weight control is eliciting the spike in the sales of dietary supplements for weight loss and sports nutrition.

The study also estimates, sales of dietary supplements in the sports nutrition are likely to expand at over 11% of compound annual growth rate.

Based on these aforementioned factors, the global dietary supplements market is slated to increase at a CAGR of over 9.4% through 2031, reaching a value of approx. US$ 254 billion.

How is Consumer’s Skepticism about Benefits of Dietary Supplements Affecting Sales?

The Food and Drug Administration (FDA) announced that it regulates dietary supplements under the Dietary Supplement Health and Education Act of 1994 (DSHEA). Hence, it’s mandatory for the stakeholders in the dietary supplements market to meet the safety and labeling requirement.

For instance, the U.S. Food and Drug Administration (FDA), on May 21, 2021 announced that they seized more than 207,000 units of dietary supplements that contain kratom, including over 34,000 kilograms of bulk kratom, an adultered dietary supplement ingredient, manufactured by Atofil LLC, subsidiary of premium manufacturing products.

Additionally, many pharmaceutical and healthcare companies published the research papers stating that there are no possible outcomes where dietary supplements helps in preventing chronic as well as any life threatening diseases.

Furthermore, adulteration and potential of substance abuse in the ingredients of these supplements are restraining the market demand.

How big is the Opportunity for Dietary Supplements Market in the U.S.?

North America is anticipated to register highest total index over the forecast period. Nutrition is becoming the new vantage point for consumers, making it a focal point for nearly all the innovations in dietary supplements across food & beverage industry. According to the study, the U.S. is anticipated to exhibit a stellar growth through 2021 and beyond.

Rising cases of obesity and increasing sedentary lifestyle have furthered the adoption of dietary supplements in the country. Rising ageing population in the country is also aiding the market demand.

Weight and obesity management is an evolving area of focus in the U.S. among the millennials which has improved the adoption of soft pills and gels for weight loss and immune & digestive health.

According to the report of Centers for Disease Control & Prevention, in 2018, the age-adjusted prevalence of obesity in adults was 42.4%, and around 14.4 million children and adolescents were recorded as over-weight.

Several health risk associated to obesity such as cardiovascular diseases, stroke and other problems are gaining momentum in the U.S. Hence, the government are encouraging the intake of dietary supplements as vitamins & minerals gummies and chewable pills to curb the growing diseases.

Thus, rising focus on curbing various lifestyle diseases is anticipated to foster the sales of dietary supplements in the U.S. Furthermore, Canada will witness marginal growth in the dietary supplement market after Mexico owing to the rising awareness about health of children and growing expenditure in healthcare industry.

How are France and Germany Leading the Dietary Supplements Market in Western Europe?

According to Future Market Insights, Western Europe is anticipated to witness an impressive growth of over 9% CAGR over the forecast period, accounting for US$ 62,146.9 million through 2021. Due to the onset of Covid-19 pandemic, population in Western Europe, specifically in France and Germany, reported surging cases of vitamin-D deficiency.

According to International Osteoporosis Foundation report, an estimated 50-70% of adults in Europe have insufficient levels of vitamin D. Also, 80% of COVID-patient in Spain were found vitamin-D deficient in 2020.

Hence, due to the growing deficiency levels and growing consciousness about health is accelerating the market growth.

Why is Demand for Dietary Supplements surging in the U.K?

According to the projections of FMI, Eastern Europe is anticipated to witness a growth of over 9% surpassing a value of approx. US$ 62,146.9 million by 2031. In the wake of Covid-19, U.K’s pharmaceutical and food & beverage industry faced adverse impact due to lockdown imposed in the country.

With that, manufacturers and producers of dietary supplements were reliant on the online retail pharmacies and retail health & beauty stores to restore the supply chain of the market. Additionally, due to the effects of COVID-19 on the population, the immune health has taken a toll, especially among the ageing population. Hence, there have been significant rise in the demand of dietary supplements across the U.K.

How big is the Opportunity for Dietary Supplements Market in India?

According to FMI, India is projected to be one of the most lucrative country for dietary supplements market across Asia Pacific excluding Japan. According to the study by World Health Organization (WHO), the cases of cardiovascular disease is rising exponentially due to the sedentary lifestyle, and growing geriatric population.

According to the report of WHO, the number of mortality rate in 2020 across India due to cardiovascular disease were estimated around 4.77 million which increased by 7.4% from 1990, when the number of deaths recorded were around 2.26 million.

In addition to that, one of the reasons leading to this disease was found to be obesity and hypertension among the patients. Hence, government have increased the funding and investment for the preventive healthcare of the people who are unable to afford dietary supplements.

Increasing initiatives by governing bodies to curb these lifestyle disease have enabled the promotion of dietary supplements in the underdeveloped regions as well. Hence, these initiatives are expected to bolster the growth.

Furthermore, the rising cases of obesity among the working class people have propelled the demand of dietary supplements in the country. In India, cases of malnutrition are surging and have become a serious health problem. Due to malnutrition, children are facing the issues of calcium deficiency and immunity loss.

As per the report of WHO, only 45% of individual who are malnutrition receive proper care. As a result, government have made the dietary supplements containing vitamin and minerals free of cost for women, children and people below the poverty line.

According to FMI’s analysis, the APEJ dietary supplements market is projected to rise at a CAGR of over 11.2% to exceed a valuation of approx. US$ 59,789.5 million through 2031.

What Factors are Driving Dietary Supplements Market in Japan?

The dietary supplements market in Japan is projected to witness an impressive growth during the forecast period, owing to the rising cases of chronic heart failure in the country. Obesity, vitamin and minerals deficiency are the major causes leading to cardiovascular disease in country. According to the report of Centers for Disease Control and Prevention (CDC), approximately 1 to 2 million patients are diagnosed with coronary heart failure and nearly 170,000 patients die due to heart diseases each year.

However, cardiovascular disease have been rapidly increasing due to the westernization of lifestyle, ageing population and poor dietary habits. Also, increasing geriatric population in Japan have aided the demand of dietary supplements.

According to CDC, as of 2006, the total population of Japan was 127.8 million and the number of elderly aged 65 or older were 26.6 million, accounting for 21% of the total population. The ageing population is estimated to continue rising rapidly and the percentage of the elderly is anticipated to reach 35.8 million (27%) in 2055.

Hence, as per the FMI’s analysis the dietary supplement market in Japan is poised to expand at over 8.4% CAGR over the forecast period, accounting for US$ 22,392.5 million million by 2031. 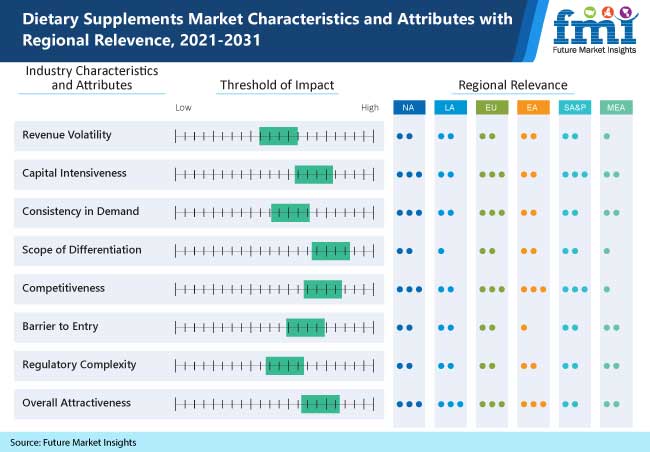 Why Vitamin & Minerals are the Most Preferred Ingredients in Dietary Supplements?

Increasing awareness about the importance of a proper dietary lifestyle is anticipated to boost the market demand. Increasing weight concern and vitamin & mineral deficiency among the working class as well as the ageing population have accelerated the demand of vitamins & minerals as dietary supplements. Dietary supplements containing vitamins & minerals are freely available and does not need any prescription to acquire.

Also, to maintain a healthy diet in a hectic lifestyle is becoming more challenging. Keeping that mind, the manufacturing companies are focusing on developing dietary supplements enriched with vitamins and minerals that can be included in a normal diet for all the age groups. Considering this, the demand for dietary supplements is anticipated to rise over the coming years.

Why Women and Senior Citizens Account for Maximum Consumption of Dietary Supplements?

Increasing health awareness among consumers, especially among women, is a major factor driving the growth of the market. Growing geriatric population across the globe is another factor contributing to the demand of dietary supplements. Rising geriatric population have become more health conscious, and is focusing on adapting to dietary supplements to maintain their good health.

Increasing cases of arthritis and other calcium deficiency issues have augmented the demand of dietary supplements among ageing population. According to the report of National Health Institute, of the total population studies, around 40.6% have dietary calcium deficiency and there are numerous cases of osteomalacia in adults, condition leading to osteoporosis. Hence, there have been a surge in demand of Vitamin dietary supplements among all the demographics; men, women, and pediatric.

How Internet is the Most Preferred Distribution Channel?

On the basis of distribution channel, the market is segmented into pharmacies/drugstore, health & beauty stores, hypermarket/supermarket, internet, and direct selling. Penetration of e-commerce and social media in the food & beverage industry are the most preferred distribution channels for reaching large customer base.

As per the FMI’s projections, the internet segment is anticipated to witness high demand over the forecast period, especially due to the outbreak of Covid-19. Because of the growing popularity of internet among consumers and the safety of online transaction, many dietary supplement manufacturers are promoting and selling their products through online platforms.

Furthermore, increased preference of consumers to purchase the dietary supplement through online channels have compelled the producers to establish their presence on these platforms. Hence, retail pharmacies and retail health & beauty stores are gaining popularity among the consumers.

How is Prevalence of Obesity Stimulating the Sales of Soft Gel and Pills?

Sedentary lifestyle among millennials and Gen-Z have increased the prevalence of obesity in not only developed regions, but also in developing regions. The growing cases of obesity, as a lifestyle disease, has quadrupled in the past four decades.

According to the report of World Health Organization, in the year 2020 the U.S. adult obesity rate crossed the 40 percent mark and stood at 42.4% rate. The national obesity rate increased by 28% since 2008. As per the report of National Institute of Health, around 39% of global adult population were classified as obese in 2014.

According to the FMI’s analysis, weight loss and sports nutrition are the most popular application of dietary supplements, collectively accounting for the highest revenue share in the dietary supplement market.

In November 2020, Unilever announced the acquisition of Smarty Pants Vitamins, a U.S. based vitamin, mineral and supplement company.

In May 2021, CRN Foundation announced the launch of Vitamin D and Me! Website to encourage and market the dietary supplements to expand their customer base in the U.S

In November 2019, another leading player Amway announced the investment of US$ 200 million to set up a dietary supplement innovation center across China. The investment helped the company for an overall expansion by offering custom-made solutions.

Furthermore, in October 2019, Herblife International announced the launch of a relaxation tea and new immunity essentials, containing EpiCor, to meet the nutritional supplement demand across the U.S and Canada.

Leading dietary supplements manufactures as profiled by FMI include*: