Demand for food additives has witnessed a transition in the recent past on back of evolving regulatory environment and growing consumer awareness.

US, UK, France, and Germany have traditionally remained largest markets for food additives. US accounts for over 75% of food additive demand in North America.

Demand for food additives will remain the strongest in the beverage segment, with revenues set to grow at 7.1% CAGR.

In addition, in 2017, Cargill Incorporated announced the launch of new carrageenan that is extracted from Satiagel ABN 500 algae. This can be used as a texture variant for food and beverages. In 2017, Nippon Shokubai acquired a halal certification with an intention to respond to the changing consumer sentiments regarding the food additives, especially in the Southeast Asian countries.

The limited solubility of natural food additives plus their high cost make them unattractive. On the other hand, there is an aversion towards artificial food additives, owing to their potential risk on the human body. Hence, consumers are shifting towards additive-free food and beverages, which could negatively impact market growth.

Food additives are used across a variety of applications such as bakery & confectionery, dairy & frozen desserts, beverages, meat & poultry products, and others which include sauces, soups, and baby food, in order to increase the sweetness, enhance or add colors, add flavors, and stop the deterioration of food. Within the U.S., there are an estimated 10,000 food additives, including color additives, fat replacers, flavour enhancers, preservatives, stabilizers, and texturizers being used, of which, 3,000 are FDA approved.

Rising Focus on the Production of Organic Food Products

Growing health concerns across the globe coupled with raising awareness about the associated benefits of organic food products will boost the demand for naturally sourced food additives in the global food additives market. The trends in the food additives market are expected to propel the adoption rate of natural food additive products such as organic preservatives and flavouring agents, natural colourants, stevia-based sweeteners, rosemary extract, and many more.

Health conscious consumers prefer to check the ingredient list on any food product label prior to making a purchase decision. Manufacturers in the food additives market have understood this consumer sentiment, and are working towards creating packaging designs that are more appealing to health-conscious consumers.

Expansion of Convenience and Processed Food in Less Developed Countries

One of the major drivers expected to drive the growth of the food additives market across the globe is the expansion of the convenience and processed food industry in various less-developed countries across the globe. The food industry in regions such as North America and Europe is highly mature, which supports the growth of manufacturers in the food additives market in other regions.

For instance, in countries with rapidly increasing urban populations such as India, China, and Brazil, and regions such as the Middle East, there is an increasing demand for processed food, and the per capita income of consumers is also increasing. Growth opportunities in the food additives market due to a growth in food consumption in regions such as the Middle East and Asia Pacific is prompting various leading manufacturers in the food additives market to set up production units in these regions. Due to this, countries such as China have emerged as the leading producers and exporters of various varieties of food additives. 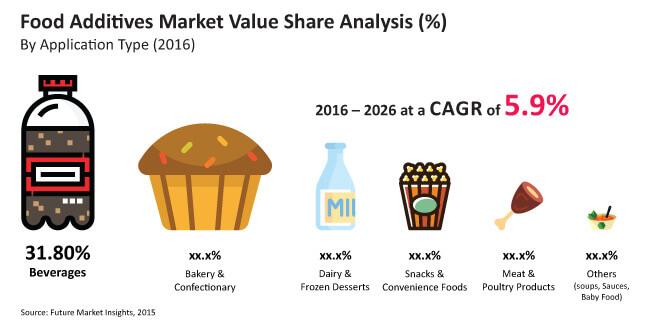 Another major driver in the food additives market is growing supply chain complexities in the food and beverage industry, such as last mile reach for various food products, transportation costs, and setting up storage facilities, which are various company's expansion strategies. All these factors increase the complexity of the value chain, which, in turn, promotes the demand for food additives in order to reduce the spoilage and wastage costs involved with various food products.

Based on application type, the food additives market is segmented into bakery & confectionery, dairy & frozen desserts, snacks & convenience food, beverages, meat & poultry products, and others (including sauces, soups, and baby food). The beverages segment is estimated to remain dominant in terms of value over the forecast period in the food additives market, growing at a CAGR of 7.1% during the forecast period.

Companies operating in the food additives market are focusing on adopting the micro-encapsulation technique for color delivery system and final product formulation. They develop colors for broad-spectrum foods and beverages. In February 2015, Tate & Lyle PLC, a major player in the food additives market, launched ultra-low calorie sugar, which is made using a proprietary process and enzymatic conversion of corn.

In May 2015, Cargill Incorporated introduced a new range of carrageenans obtained from seaweed, Satiagel ABN 500, as a part of its texturing solutions. Cargill has been conducting research activities to identify solutions for reducing saturated fats in baked goods by 40%, using a mix of starches, vegetable waxes, and emulsions.

Is food additive industry growing in US?

US is one of the largest markets for food additives, accounting for over 75% share in N. America.

What is the global food additive market size?

The global food additive market size is over $60 billion in 2021. Food additives market is set to grow at 5.85% CAGR

Who are the key players in food additives market?