Cereals and Grains to be highly consumed, being a rich source of insoluble dietary fibres

The cereals and grains segment is valued at more than US$ 600 Mn in 2017 and is estimated to reach a value a bit over US$ 1 Bn by the end of 2027, thus cementing its dominance during the assessment period.  This segment possess high potential as it is the second fastest growing segment and is poised to register a value CAGR of 6.2% throughout the period of forecast, 2017-2027.

Fruits segment in the source category is anticipated to be the fastest growing in the coming years. It is projected to expand at a value CAGR of 6.4% during the period of forecast. It is the second largest source type segment in terms of market valuation. By 2027 end, it is estimated to reflect value a bit under US$ 700 Mn from US$ 375 Mn in 2017. With respect to volume the fruits segment is poised to reflect a CAGR of 5.8% during 2017-2027. 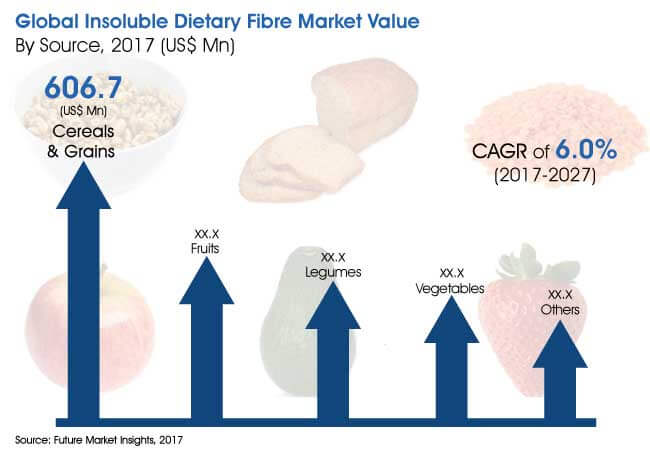 The fruits segment in source category has been further segmented by exotic fruits, citrus fruits and others. Among these, the citrus fruits sub segment is expected to show high contribution to the growth of the parent segment.

This sub segment is the largest in terms of value thus leading the market. It is also projected to grow at a high value CAGR of 6.7% throughout the period of forecast. Citrus fruits sub segment was valued at about US$ 253 Mn in 2016 and is estimated to reach a valuation of more than US$ 500 Mn by the end of the assessment year (2027).

This sub segment has shown high potential during 2012-2016 and expected to continue radiating high lucrativeness in the years to follow. Others fruits sub segment is the second largest and is estimated to reach US$ 117 Mn by 2027 end.

The global research report on insoluble dietary fibre market includes an in-depth analysis on each segment of the entire market. The market segmentation covers product type, source, application and region.