Dietary fibres can be found in a variety of meals. However, they are mostly found in plant foods, including fruits, vegetables, and legumes. Based on the type, the two most common forms of dietary fibres on the market are soluble and insoluble. Plants provide the majority of these fibres, which are made up of cellulose and non-cellulosic polysaccharides. Dietary fibres are used in a variety of industries, including pharmaceuticals, food and beverage, and animal feed.

Dietary fibres help the body eliminate waste, maintain weight, and prevent diabetes and heart disease by reducing blood sugar and cholesterol levels. Dietary fibre is one form of carbohydrate that human enzymes are unable to break down. Dietary fibre, which is partially or totally fermented, is transferred to the large intestine and helps to keep the intestines healthy. It also aids in the prevention of ailments such as coronary heart disease and rectal colon cancer.

Dietary Fibre's possibilities for food fortification are currently being used by a growing number of food product manufacturers. High digestive tolerance, fibre enrichment without sacrificing taste, colour, texture, remarkable stability, consumer-friendly labelling, and ease of formulation in a wide range of applications are just a few of the benefits. In the coming years, the demand for the fortification of soluble dietary fibres in food products is expected to increase. Ingredion Incorporated is a prominent ingredient producer.

Obesity rates are rising in many areas due to an increase in the consumption of junk food and fast food by children and teenagers. According to the (WHO) 39% of persons over the age of 18 are overweight, with 13% being obese. Dietary fibres have the ability to suppress hunger and calorie intake, which can help you lose weight. Insoluble dietary fibres ability to control obesity is projected to help them outperform their demand during the forecast period. 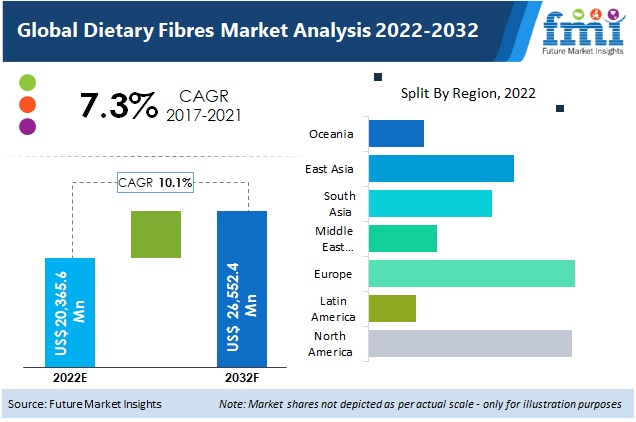 The time and resources to consume healthy food have decreased as a result of rising workloads, hectic lifestyles, and the rise in the number of working women. As a result, there is an increasing need for items that provide a well-balanced diet. As a result, the growing consumer demand for functional foods, nutraceuticals, and supplements. The market for dietary fibres is growing in the United States, as it is an essential element in functional food items.

Italy is the fastest-growing dietary fibre market in Europe.

Italy has the fastest growth rate in Europe, thanks to a growing number of health-conscious consumers who are eager to use dietary supplement products. By the end of 2032, the Italian market is expected to earn US$ 175 million in sales, owing to an increase in the consumption of nutrient-fortified foods.

Significant changes in lifestyle and culinary patterns have occurred from lifestyle changes, a lack of leisure and economic development, as well as the region's growing urban population. Other significant drivers boosting the market include an increase in fibre consumption in daily foods and a promising trend in functional food development.

China’s population provides an opportunity to expand its product portfolio.

China's population has a wide range of interests and preferences. Manufacturers continually develop and expand their product portfolio to satisfy changing consumer needs. Most urban areas in China have hectic lives, which provide an ideal chance for on-the-go breakfast and handy goods. Excessive consumption of baked products and processed foods, in particular, is driving growth in China's growing marketplaces.

Furthermore, the country is seeing rapid growth in terms of new product releases and developments. Major corporations are planning commercial expansion in order to expand their market share, and they are spending to augment the country's manufacturing capacity.

Increased fortification and supplementation efforts, which stimulate the use of dietary fibres among consumers of all ages, are driving the dietary fibre market in Brazil. More than half of Brazilian consumers want to improve their fibre consumption. This spurred manufacturers to add dietary fibres to higher-value items like crisps, puffs, and flakes. Fibres from diverse sources, such as chicory root, asparagus, carrots, Jerusalem artichoke, jicama, leeks, and whole grains, which are available locally, have been increasingly used by manufacturers to make fortified food products with high fibre content and fibre-based supplements in the functional food business.

In South America, Brazil has the largest market share, followed by Argentina and other countries in the region. The insoluble dietary fibre market in Brazil is primarily driven by increased health concerns and demand for high-quality food. In addition, rising consumer purchasing power and knowledge of the advantages of fibre consumption are propelling the Brazilian insoluble dietary fibres market forward.

The cereals and grains segment dominatethe Dietary market, accounting for more than 48.0 per cent of total revenue. Consumption of these fibres lowers the risk of cardiovascular disorders like stroke and heart disease. Furthermore, fibre included in oats, flaxseeds, beans, and oat bran aid to lower overall blood cholesterol levels by lowering low-density lipoprotein.

Beta-glucan, pentose, and arabinoxylans are some of the primary soluble fibres found in whole grains like wheat, rye, and barley, whereas insoluble fibres like lignin, cellulose, and hemicellulose are found in cereals like rice, maize, and wheat bran. Dietary fibres market expansion is expected to be fueled by the increasing importance of beta-glucan as an immune booster in the nutraceutical and pharmaceutical industries.

The food and beverage application sector dominated the market, accounting for more than 44% of total revenue. One of the important elements driving demand for the product is consumer faith in the health advantages associated with dietary fibre. Furthermore, the market is expected to have rising demand for healthy and functional food products in the coming years.

Breakfast cereals are in high demand in the food industry due to their improved nutritional profile. The strong demand can also be attributed to customers growing health worries about the negative impacts of processed and fast foods and also over-consumption of calories.

Dietary fibre manufacturers are pursuing strategic alliances and strategic partnerships with other manufacturers in order to enhance productivity and meet the demands of an ever-growing patient pool.

The industry is defined by a high level of capital expenditure and a complicated manufacturing process. Cost-effective manufacturing procedures can help establish global market sustainability. The (FDA) in the United States and the European Food Safety Authority (EFSA) in Europe are expected to stymie the entry of new businesses. Furthermore, the existence of a large number of producers is likely to raise entrance barriers.

Cargill, Inc. invested about USD 35 million in Europe in October 2019 to expand its current product line of sweeteners, starches, and texturizers to include soluble dietary fibres. This strategic project is the company's first foray into soluble dietary fibres in Europe, and it was launched to give on-trend solutions to makers of high-quality products such as bakery & confectionery goods, cereals, and dairy products.

How much is the Dietary Fibres market current worth?

Currently, the Dietary Fibres market is worth more than USD 8.8 Bn.

What are the key trends boosting Dietary Fibres sales?

Dietary Fibre's possibilities for food fortification and their ability to suppress hunger and calorie intakeare is being used by a growing number of food product manufacturers.

Dietary fibre manufacturers are pursuing strategic alliances and strategic partnerships with other manufacturers in order to enhance production and meet the demands of an ever-growing patient pool.

Which are the major countries driving demand for Dietary Fibres?

Who are the major players in the Dietary Fibres market?