Antibodies Market: Launch of Innovative Drugs and Easy Availability of Biosimilar is Expected to Boost the Demand: Global Industry Analysis and Opportunity Assessment 2016 - 2026

High cost of drugs, particularly biologics, is becoming an increasingly important issue in controlling healthcare cost. Economic burden of cancer and other chronic diseases is increasing with increasing healthcare expenditure. Improvements in production technologies of therapeutic antibodies has decreased the manufacturing cost and thus, penetration of antibodies has increased in cost-sensitive markets, such as Japan, Brazil and China.

For instance, Herceptin (trastuzumab), which is otherwise used when all other treatment options are exhausted, is being used as a first line therapy for HER2 positive breast cancer cases, in Japan. Roche reported 23% Y-o-Y increase in Herceptin sales in FY 2015, with high demand reported from Brazil and China.

Next-generation therapeutic antibodies, such as biosimilar antibodies, represent high growth potential for the antibodies market. For instance, Inflectra, a biosimilar of Remicade was approved by EU in 2013 and is now available all over the world. Inflectra was commercially launched in the U.S. in 2015, when it generated a revenue of US$ 30 Mn. Within the first year of launch, Inflectra registered 540% Y-o-Y growth in the global sales in 2016.

Moreover, numerous biosimilar monoclonal antibodies already launched in the market would fuel the market growth by increasing treatment seeking rate and patient acceptance. Novartis AG, one of the leaders in prescription medicines, has recently received EU approvals for two biosimilar antibodies for rheumatoid arthritis. In April 2016, ERELZI-Novartis biosimilar to Enbrel, was approved by the U.S. FDA. Subsequently, in April 2017, ERELZI was approved by the European Union. With this approval, Novartis unlocked the huge market potential for RA in 28 member states of EU.

Due to high competition to branded antibodies by next-generation biosimilar antibodies, manufacturers of these products are cutting down the prices in order to withstand the increasing competition in the European market. For instance, after the launch of Inflectra (biosimilar to Remicade) in the U.K., Bulgaria, Estonia, Hungary and several other European countries in 2013, Merck & Co. reduced the price of Remicade by up to 45% in the U.K. to sustain competitive pressure. Although the prices have been slashed down, automatic pharmacy substitution of branded antibodies by biosimilar antibodies is not being observed in Europe as EU countries prefer lower cost than increased access, and EMA advice against such substitutions.

For instance, world’s top-selling drug Humira’s sale totaled at US$ 18.4 bn in 2017. Humira is about to lose its patent protection in EU in 2018. Since, Humira is AbbVie’s capitalizing drug, patent expiry would cause substantial business loss to the company. The company, thus, is investing considerable efforts to expand the indications of Humira in the therapeutic areas of rheumatology, ophthalmology and gastroenterology. This is expected to create opportunities for the company to retain its market share in the global antibodies market. 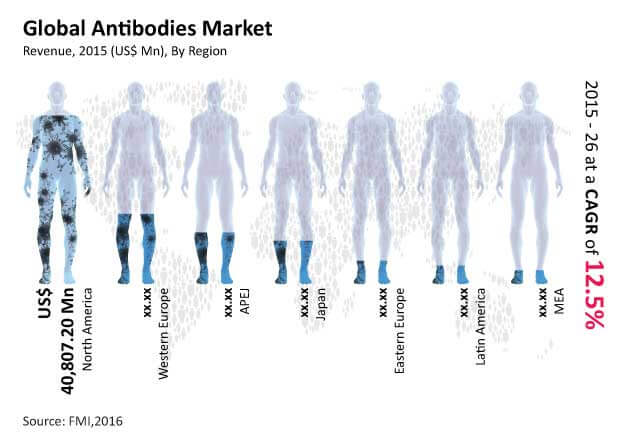 Since antibody is a relatively new field of therapeutics and diagnosis, regulations for the registration and marketing of antibodies in various countries have evolved overtime. Mature markets, thus, have established regulatory guidelines for therapeutic antibodies. Important recent regulatory developments for antibodies in emerging markets, such as China, India, Brazil, etc., would widen the worldwide reach of antibodies. For instance, in 2014, the Centre for Drug Evaluation China released guidelines for regulatory approval of biosimilar of biologic drug products, which is similar to EMEA and U.S. FDA guidelines.

Major players in the antibodies market, such as Roche, Novartis, Biogen etc., are employing synergistic approaches of co-promotions and co-marketing of their antibody products with other companies. Synergy between partners is presenting immediate growth impact rather than mergers & acquisitions.

Note: For detailed analysis on all the key market factors, request a sample.

Considering high growth potential of cancer immunotherapy, Novartis AG, the global leader in antibodies market, is focusing on developing new antibody-based therapeutics in this therapeutic class. The company is studying over 20 investigational antibodies for cancer immunotherapy, nine of which have entered into clinical trials. J&J is focusing on innovative product launches to ensure long-term growth. The company has launched a number of antibody-based products in the last two years, including SYLVANT, STELARA and DARZALEX.

Japanese pharmaceutical and biopharmaceutical companies are taking efforts to develop new technologies to capture growth potential in highly promising antibodies market. For instance, Astellas Pharma Inc. is developing a device to predict the effects of antibody using their 3D structure, which will further be used in antibody based drug discovery processes. Chugai Pharmaceutical Co., Ltd. has been involved in the development of long acting antibody drugs which would reduce the frequency and cost of administration.

Note: For full coverage of the competitive landscape, get in touch with our experts.

Antibody, also called as immunoglobulin, is a protein produced by plasma cells in response to specific antigens. These antibodies can be used as therapeutic as well as for diagnostic purposes for several indications, including cancers, autoimmune disorders, inflammatory & infectious diseases and others.