In terms of value, the global market for barley is expected to increase at a CAGR of 3.3% during the forecast period and is projected to account for US$ 28,000 Mn by 2026 end. Increase in demand for barley can be attributed to increasing applications of barely in the food and beverage industry and increasing awareness among consumers regarding the health benefits derived from the consumption of barely. Barely is also one of the most easily available grains and is a clean label product.

The many benefits of barley and its growing usage in varied end-use industries, such as food industry, beverages, pharmaceuticals, animal feed and cosmetics and personal care  products, are expected to drive the growth of the barely market during the forecast period. The Barley market has major end-use potential in beverages, both in alcoholic and non-alcoholic beverages markets.

The global Barley market has also been segmented on the basis of different grades. On the basis of grade, the barley market has been segmented into Malt Grade (standard and speciality), Food Grade, Feed Grade, Pharmaceutical Grade and Cosmetic Grade. Malted barley is one of the most important ingredients in beers. It is also used in different types of extracts and syrups that impart sweetness and flavor to other prepared food products and is also used as an ingredient in bread starters.

Malted barley is also considered to be one of the good sources of protein, manganese, dietary fiber and selenium. Malted barley held a dominant share of 40.5% in 2016. Increasing demand for malt-based beverages, mostly from developing regions, is expected to continue in near future and is anticipated to drive the demand in the global barley market during the forecast period.

The global Barley market is being driven by factors, such as growing awareness about health benefits associated with cereal ingredient-based products. Barley offers versatile and functional properties and is available in various forms. Malt from barley is used as a versatile ingredient and barley grits and meals are used as animal feed. Barley is majorly used for feed products across the globe. Manufacturers are launching products to add value to feeds.

Barley is rich in beta-glucan and offers various health benefits. For instance, it helps in controlling glucose absorption, reducing cholesterol, etc. However, due to increasing malt production, some regions are experiencing barley shortage. Researchers are working on improved seed varieties to increase production yields. Barley is widely used in non-alcoholic drinks and local drink recipes.

Barley drinks offer benefits, such as low GI and low fat and cholesterol content and thus, help in maintaining blood sugar level. Barely is also gaining traction as an ingredient in many food products, especially because of its high fiber and nutrition content and is also used in children’s snack items.

The demand for Barley has been witnessing a rise since the past couple of decades. Barley is expected to witness increasing demand from the global alcoholic beverages and animal feed industry. As malt beverages are one of the most common variety of beverages, both alcoholic and nonalcoholic beverages containing barely malt are gaining traction.

Barley is primarily grown in countries, such as Russia, France, Germany, Ukraine, Australia and others. Barley is considered to be one of the most important crops by the farmers in these regions. A major amount of barley is produced in these regions. Barely has resistance property, which allows it to grow even in extremely hot areas, such as North Africa. 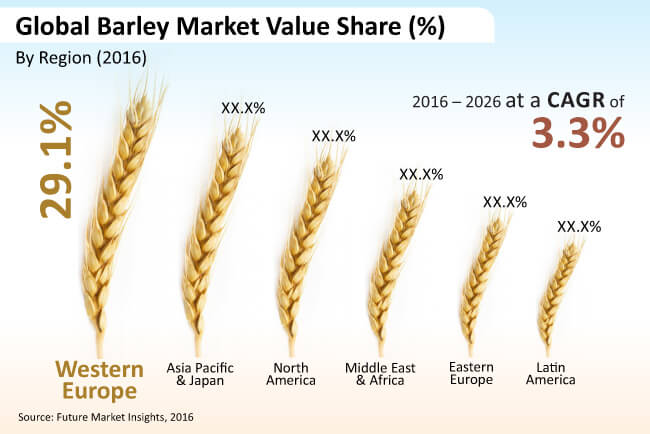 Developing countries account for around 18% of the total global barley production and 25% of the total harvested land around the globe. Barley straws are used as animal feed in western parts of Asia; North of Africa; Yemen; Ethiopia; Eritrea and other eastern parts of Asia. Barely is one of the staple food crop plants consumed by people in regions of Africa; Middle East; some areas of Nepal; Tibet and Ethiopia; some countries in South American and South Asian regions, such as Peru and Chile in South America; and Himalayas and China in Southern Asia.

The major players in the Barley market and various research and seed treatment companies are developing varieties of barley that have higher beta-glucan content as it has been claimed that beta-glucan can help to lower cholesterol levels in blood.

Barley Is Majorly Used for Feed Products Across the Globe. Manufacturers Are Launching Products to Add Value to Feeds