Up from around 105,000 tonnes in 2017, the global consumption of microbial cultures is likely to surpass 151,000 tonnes by the end of 2026. Estimated at a moderate CAGR of 4.1% over 2017-2026, the cultures market is expected to witness a major upthrust from the beverages segment, as indicated by a recent study conducted by Future Market Insights on cultures market.

According to the study on the global cultures market, the competitive landscape appears to be highly fragmented and top players operating in cultures market represent individual value shares of less than 25%. While companies such as Corbion fall in the 15-25% revenue share cluster, other prominent players including EI duPont De Numours and Company, Kerry Group Plc, Cargill Inc., and Royal DSM occupy the cluster of 5-15% revenue share in cultures market.

Owing to high-demand applications in the beverages sector, starter culture is likely to witness significant traction in cultures market throughout the forecast period. Technological advancements and an expanding application base in the production of alcoholic as well as non-alcoholic beverages are foreseen to remain the key drivers pushing the growth of starter cultures through 2026.

Production of wine, beer, buttermilk, kefir, and other popular beverages demands induction of unique and intense flavors, which is mainly achieved by adding starter cultures. A heap of potential business opportunities are presumed to exist in starter culture segment, observing the current rate of technological advancements involved in fermentation processes. 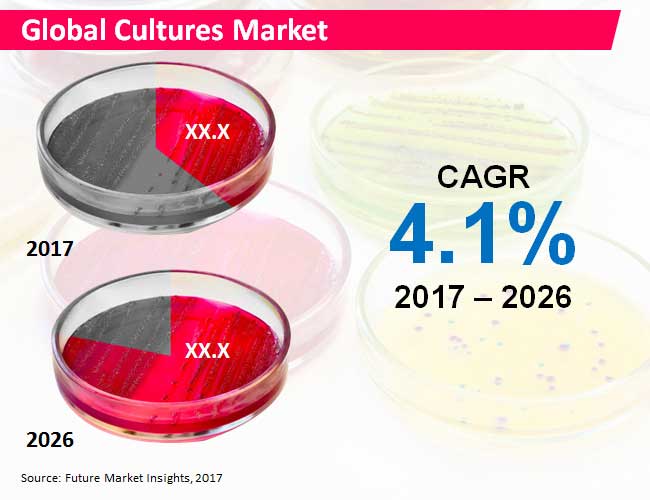 Growing popularity of free-dried cultures is expected to drive a slew of innovations on the competitive landscape, as a large number of market players are increasingly considering these cultures profitable across the supply chain.

The exploding growth of food and beverages industry has been undergoing a rapid shift to Asian market, following Europe and North America. While China retains the top position with the presence of a myriad food manufacturing and processing units, Indian F&B sector will continue to be primarily driven by the dairy segment that has been witnessing enormous innovation in recent years.

Despite holding a decent consumption rate in the tea and coffee segment, APEJ’s cultures market is expected to witness substantial growth in sauces, dressings, and condiments section as a result of growing fast food culture and the prospering QSR (quick service restaurants) sector.

Bakery and confectionary has been identified to become the second largest consumer of cultures in APEJ, followed by dried and chilled/frozen processed foods. Beverages are also slated to contribute a considerable share in the total consumption of cultures across Asia.

Looking at its consistently growing volume share in global cultures market, APEJ may outgrow Europe in next few years. This growth is prominently attributed to the highest growth prospects estimated for starter cultures, i.e. at 6% CAGR in APEJ.

Saturated markets in Europe and North America, though cumulatively account for over 160,000 tonnes in terms of volume, will demonstrate poor growth throughout the forecast period - representing high volume-low growth markets for cultures over 2017-2026.

Stringent regulatory norms set by governments have been shaping the developmental strategies of key players in cultures market. While Cargill, BASF, duPont, Ingredion, and others are maintaining their focus on the product quality, strengthening the distribution network is also expected to remain a key strategy for better customer outreach.

Promotional strategies are also being reassessed, in addition to repositioning of the brand in global cultures market. Companies in cultures landscape are increasingly keeping a keen eye on capturing real-time consumer perceptions, including changing taste preferences and evolving interests.

Specialty ingredients are also expected to gain the spotlight among cultures market players. Recently, a majority of leading companies in cultures landscape have also been indulging in new product launches.

duPont Nutrition & Health launched a new culture portfolio earlier this year that has been specifically formulated for phyto-fermentation products. These cultures are available in the freeze-dried format and are ideal for use in small and large scale production processes.

Chr. Hansen also brought in 10 brand new next-gen cultures to the cultures market with an objective to introduce a substitute for synthetic preservatives based on cheese and yogurt. Available in free-dried pellet format, these cultures are expected to gain traction for an added benefit of extended shelf life. Tate & Lyle Plc also introduced a new tapioca-based starch in European and MEA cultures markets.

Click to know more on competitive scenario and understand key strategies of the participants in global cultures market.

The global cultures market is segmented on the basis of product type, application, and region. These market segments are further segmented into sub-segments. The report provides detail on each and every segment along with the segment expected to be the largest in the market.