New applications of GPS trackers are developing in Western Europe. The use of GPS tracking in laser aimed darts is a novel concept which got success after its testing. Such areas of applications, getting developed successfully and now need to be brought to light to the population. For instance, In June 2017, the police in Waterloo, Belgium used GPS trackers to track a truck. The police found the laser-aimed darts a safer alternative to chase. This innovative technology was deployed for the first time.

GPS tracking is still in introductory stages of its application in the aviation industry. The delay in delivery of correct piece of information is a major drawback of this application, which is particularly critical in regions like Eastern Europe, where pilots have to operate in regions with unstable connection. This is motivating the several companies to launch high standard GPS trackers that could be helpful in aviation industry. In February 2017, UTair-Helicopter services, a Russian helicopter operator, launched GPS tracking over its entire fleet. These trackers monitor aircraft movements and thus work towards improving the aircraft safety.

The rising imports and exports between countries bolsters the market growth for GPS trackers. The amount of cargos transported between countries is witnessing a fast growth which create an inevitable need for fleet management solutions to ensure the safe delivery of goods. These needs create an opportunity for a strong growth potential in the global GPS trackers market. According to World Bank, the exports and imports of goods from Brazil and Mexico increased significantly from 2010 to 2016.

Apart from the traditional usage of GPS trackers in vehicles for navigation, umpteenth of new areas of applications are developing. One of the emerging area of development is in nabbing of criminals by the police department. In July 2017, Police officers in India used a small, discreet GPS tracker called the Track 24×7 Mini-Tracker developed by a local Indian developer. The device was used to track suspects in a special case. Further, satisfied with the results, the police asked the developer to provide them 50 more mini-trackers

GPS is critical to the development of new applications like drones and self-driving cars, which has become an indispensable part of population especially in the developed regions like Japan where people lead a luxurious life yet are very much concerned about their safety.

The increasing amount of goods transported between the countries mainly the UAE and gulf countries is one of the primary driver for the growth of GPS tracker market in MEA. Due to rising transport, companies providing fleet management solutions.

Advanced tracking in high value air cargos is still a nascent technology which needs careful handling. The transportation of valuables like pharmaceuticals and temperature sensitive electronics, needs to be monitored throughout the journey very carefully. The trackers used for such purposes are undergoing extensive R&D, with the launch of successful trackers are expected to increase the demand for trackers in the near future. 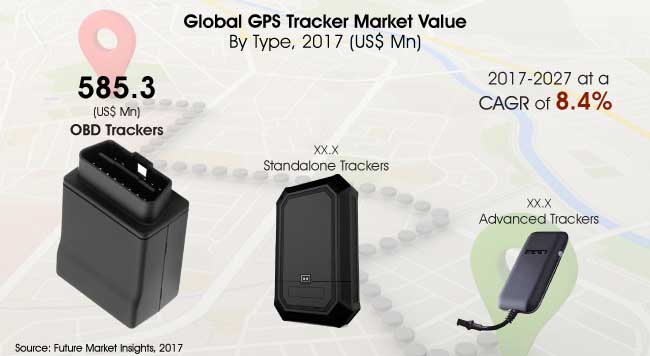